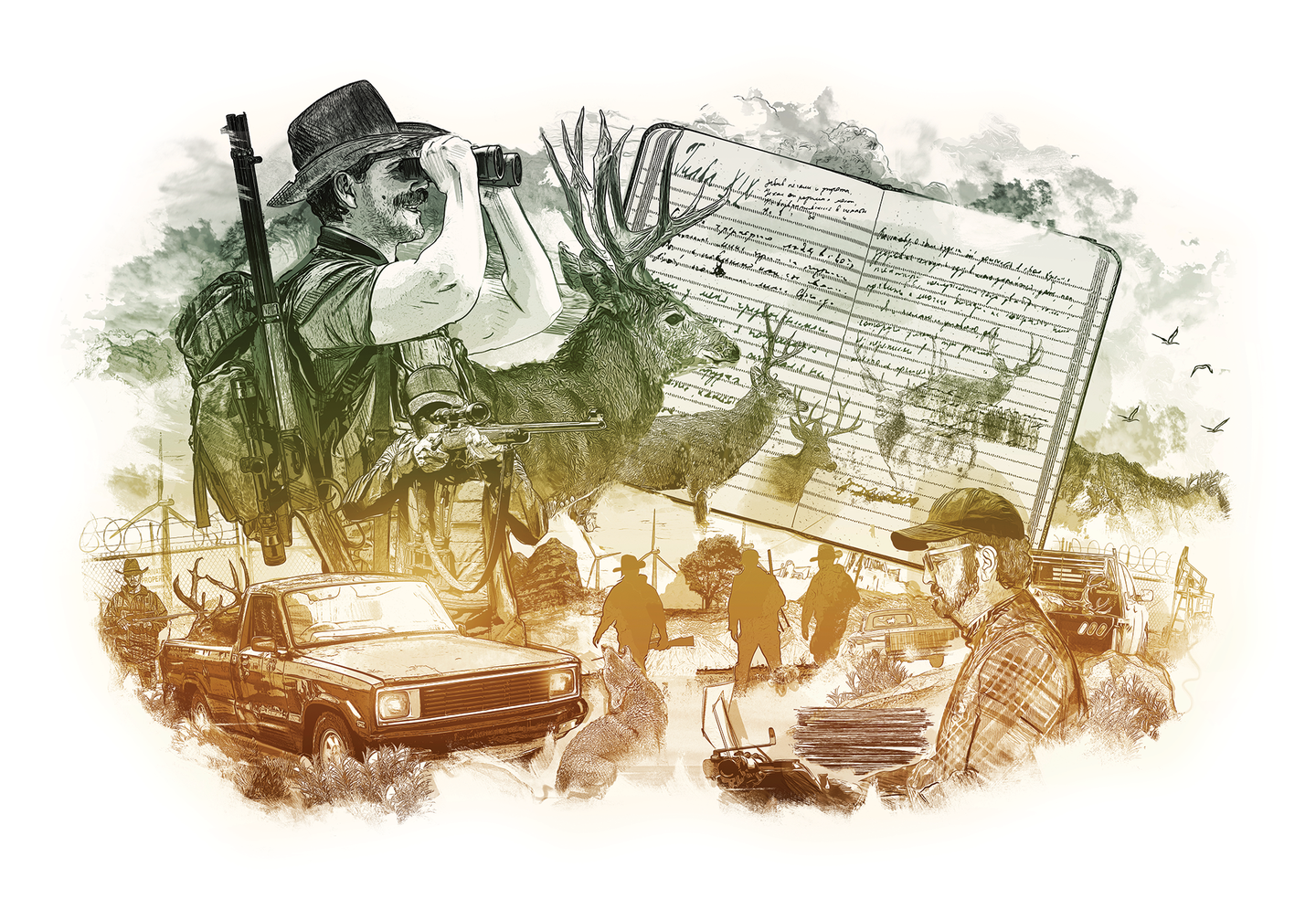 Memoirs of a Mule Deer Hunter

Wildlife experts have been predicting a mule deer extinction for decades. Luckily, no one seems to have told the deer

IT WAS DARK AS A TOMB as I slipped through the sagebrush and down a steep slope, my flashlight slicing through the black. The moon and stars were smothered by low, scudding clouds. Snow was in the air. I’d arrived at the tent camp in Utah after nightfall the evening before and had no idea what the country looked like in the daylight. It was 1961, and it was my first mule deer hunt.

As daylight broke, I was astounded to find myself in a sea of sagebrush. There wasn’t a tree in sight. I was born and raised in the East, and the whitetails I’d hunted there were always in the woods. Doubt crept in. My father-in-law, who was a local, had told me to slowly work my way down the slope after daylight and to set up where I could hit a deer walking through the bottom of the canyon. Was he serious?

After two hours of listening to distant coyotes and pinyon jays—and seeing nothing—I was certain no deer would ever show. About then, I looked far up the canyon and saw movement along the trail. A buck was slowly walking along, feeding as he went. I had no idea if he was a representative buck or a really big buck—but I didn’t care. To my untrained eyes, he looked plenty good. As he moved into range, a severe case of buck fever hit. I rested my rifle—​an old .303 British Enfield I’d borrowed from my roommate in forestry college—on my wobbly knee and tried to calm my addled mind.

It took three shots to drop that deer. His antlers were heavy and deformed and he had a huge body, weighing 232 pounds dressed on my father-in-law’s farm scales.

Now I could call myself a mule deer hunter—sort of. I still had a lot to learn about mule deer, which would decline so dramatically during my hunting and writing career that many predicted their extinction. Mule deer are iconic deer of the West, but they’re mysterious too. And 60 years later, I’m still learning about them.

During that early era, I worked for an outfitter and guided mule deer hunters in Utah’s Book Cliffs. One of our clients was the late G. Howard Gillelan, Outdoor Life’s bowhunting editor. Our strategy was to spot and stalk bachelor buck groups scattered in aspen forests, which were fairly open and didn’t offer much cover. Deer were everywhere and few bucks roamed solo. Every time Howard tried to stalk a buck, he’d get busted by other bucks.

He was using a semi-recurve bow, and sights hadn’t yet made the hunting scene. His max self-imposed range was 30 yards. Howard finally arrowed a doe on the last day of his hunt. His Outdoor Life article was eventually titled “Too Many Bucks.”

Mule deer populations were high in other Western states as well. If you wanted to see a parade of nice bucks passing through, you could simply hang out at a game check station during the deer season. I began hunting other nearby states, especially Colorado, Idaho, and Montana, and I saw big bucks everywhere. Most of my hunts were on public land, but many ranchers allowed free access (leasing hadn’t yet become popular). Big bucks were plentiful on both private and public land. The ’50s and ’60s were known as the banner years for big mule deer. Unfortunately, those days were destined to end.

On one opening morning in the ’70s, I drove to my favorite spot in the Book Cliffs, and as I drove closer, I thought I saw lights through the junipers. Puzzled, I investigated and was astounded when I drove into a clearing and saw a dozen pickups and some heavy drilling rigs. My hunting spot was a short distance away and was now decidedly burned. I hunted somewhere else that year, and every year after.

The energy boom had arrived. New roads were blazed along ridges and in the bottoms of canyons. Access was opened, and the heavy scrub oak, serviceberry, mountain mahogany, and other buckbrush that had once offered deer an opportunity to grow old, and big, were now more easily hunted. Mule deer succumbed to this loss of habitat, not only in the Book Cliffs but in other regions as well. When a critter species takes a nosedive, habitat degradation is usually considered a primary factor. Such was the case when mule deer began to decline, but there were other, less obvious, factors as well.

In the early ’70s, I went to a university symposium called “The Mule Deer Decline.” It was well attended, and speakers included biologists, professors, game wardens, and wildlife students. Every possible aspect of mule deer mortality was covered: habitat loss, disease, parasites, winter starvation, drought, and predators. When the symposium was over, I left the building with a couple of older game wardens. One said wryly, “They talked about everything except the .30/06.”

His point was that in many states, doe harvests were up considerably. I recall years when in some units a hunter could take six does and a buck. There was little effort to restrict hunter numbers or distribute hunting pressure. The limited-entry system, in which hunters had to apply for a tag through a draw, evolved later. Wildlife managers established quotas in many units, striving for quality hunting in certain units with lower hunter numbers.

Outdoor journalists wrote alarming stories about the alleged mule deer disaster, and many predicted the extinction of the species, citing rapidly decreasing populations in all the Western states. It was a hot subject, attracting interest from editors. Soon much of the world believed the doomsaying.

It’s true that mule deer numbers are down from all-time highs, but in many places, they’re rebounding or holding their own. They’re wild animals, and many of the big herds are migratory. There’s nothing static about their numbers. In nature, everything is dynamic, especially when wildlife species are faced with unprecedented challenges. So why have mule deer populations plummeted? Are those pesky whitetails taking over? Is it habitat loss and the destruction of migration corridors? Truth be told, there’s no single reason, no easy answer.

Tony Mong, senior wildlife biologist for the Wyoming Game and Fish Department, says that it’s death by a thousand cuts.

“A few dozen [new homes being built] in critical winter range may not make much of a difference,” Mong said, “but when you get hundreds or thousands of homes, there’s a big impact on wildlife. Former feeding areas are gone, and there are problems with dogs, fences, more vehicle collisions, and other factors.”

In the ’70s, I was on assignment with Outdoor Life to report on the effects of an extremely severe winter across the West. I visited three states and saw literally thousands of dead deer as well as hundreds of dead antelope, most of them piled high next to drifted-in fences they had been unable to cross. During the severe winter of 2016–17, which has been called the worst winter ever in many Western regions, mule deer also took a brutal hit. They are just now recovering amid a drought.

So what does the future hold? Certainly, habitat loss is a primary reason for the decline. The construction of wind farms, solar farms, and other energy-related activities will continue to eat away at important habitat. The COVID-19 pandemic has caused a huge exodus from cities to rural regions. More and more people are searching for their slice of heaven in the West, and that means more development in mule deer country. In some areas, CWD is taking a toll. Where I live in northwest Wyoming, 40 percent of deer carry the disease in some herds. Predators, parasites, and extreme weather will always put pressure on mule deer.

But all is not lost. We’ll never again witness the glory days of mule deer hunting, like when I shot my first buck six decades ago, but there are still outstanding opportunities to take a trophy mule deer—or just any mule deer. It’s tougher to draw a nonresident tag, but limited-​entry units ensure quality hunting, and the money from those tags should work to secure more mule deer habitat. A good mule deer hunt is still worth the wait.

I’m hopeful for the mule deer’s future because I’ve seen them in every habitat in the West, some of them exceedingly severe. In 1981 I wrote a 350-page book titled Hunting America’s Mule Deer (it’s out of print now) that identified eight different habitats occupied by muleys. The book was the result of my personal observations after I made it a point to hunt in every type of habitat, plus my observations as a big-game biologist.

The habitats ranged from hot lowland deserts to the highest alpine reaches above the timberline. Once while hunting ptarmigan in Colorado above 13,000 feet I was astounded to see mule deer. I’ve seen them survive temps as low as 50 below zero. I knew a wildlife biologist in southern Colorado who studied mule deer water requirements and concluded that in the summer, mule deer didn’t drink free water but satisfied their needs with the forage they consumed.

My local mule herd is 1,500 strong and virtually disappears in the spring. These animals migrate to the high country and, according to Mong, trek more than 100 miles to where they remain until fall. Countless herds across the West follow similar patterns.

Muleys are also showing up in new areas, such as in Alaska, where some have ventured in from the Yukon. In some Midwestern states, mule deer are appearing farther east than ever before. And in West Texas, veteran hunters tell me there are more muleys now than there were 50 years ago.

Just like the dedicated hunters who chase them, muleys are tough and adaptable. My belief is that as long as corners of the West remain wild, massive old bucks will roam the highest mountains and deepest deserts. And mule deer hunters, young and old, will have a chance to chase them.