Captured on film: A vicious battle for survival between two Cape Grey squirrels. Is it real? Weigh in now. 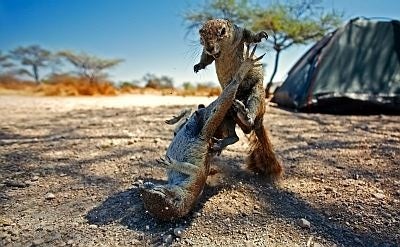 A vicious fight for dominance between two Cape grey squirrels was captured on camera, showing the pair going all out in their furious fight for survival. The pictures taken by Brit photographer David Slater, who had been close to the fight scene at that time, show the squirrels hitting out at each other using their limbs. Slater, a former International Wildbird Photographer of the Year, was able to capture the aggressive way the two were fighting as other squirrels looked on. The fight occurred at the Etosha National Park in Namibia's Kalahari basin, where the temperatures can swing from freezing at night to 40 centigrade during the day. The duelling duo was also watched by a group of five squirrels, who stood from a safe distance as the two battled it out. The picture showed one of the squirrels down but not out as it defended itself from its adversary by raising its leg, foot and claws and blocking off a ferocious attack. Other pictures showed the two getting down and dirty as they grappled about in the dust with fur flying every each way. The remarkable series of photos were taken while a colony of the creatures, which are poor tree climbers so tend to live below ground in burrows, ventured to the surface to forage for food.
SHARE

Captured on film: A vicious battle for survival between two Cape Grey squirrels. Is it real? Weigh in now.