A Recipe for a Kick-Ass Korean Dish: Wild-Game Bibimbap

We make an crowd-pleasing venison rice bowl with wild veggies 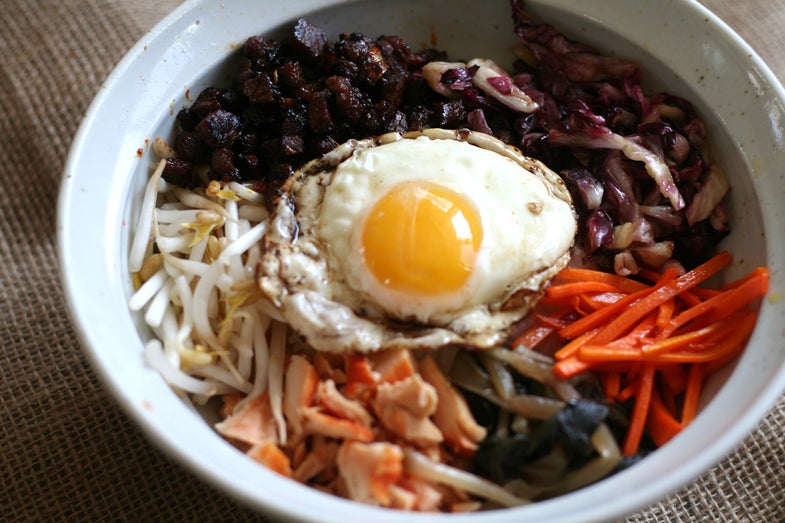 A few weeks back I wrote about a company making dehydrated backpacking meals called Good To-Go. One of those meals was bibimbap, and for those readers who don’t know, bibimbap is basically a Korean rice bowl with different kinds of vegetables and meat (it literally means “mixed rice”). Good To-Go’s version was really good considering it was dehydrated, and I made the comment in that post that it was the best bibimbap I had ever eaten.

Since then, several people have asked if that was true or if I was just being generous. It was absolutely true—I thought their dehydrated bibimbap was outstanding. It did make me think, however, about the bibimbap’s I have eaten in the past, and why I have never made one at home.

I live in Minnesota and we don’t really have a large Korean food scene. There are a few notable places, but most of the Korean cuisine we have exists in small strip mall restaurants. As usual, when I started thinking about making a bibimbap at home, I wanted to try to include as many wild ingredients as possible. Unfortunately bibimbap also has a lot of vegetables in it, and March in Minnesota doesn’t provide many opportunities for fresh wild ingredients. Luckily I had a couple of different kinds of pickled ingredients left over from last year, so I would be able to mix in a few wild ingredients, even if they weren’t fresh.

There are endless possibilities when it comes to bibimbap, and you can include any combination of pickled, fresh, seasoned and sautéed vegetables that you want. You can also add any kind of meat that you want (or if you prefer, you can skip the meat). In bibimbap, the meat is never the focus and is usually added in small amounts as a complimentary flavor—it’s not the star of the dish. The primary components of a bibimbap are rice, vegetables, some kind of meat, gochujang chili sauce, and an egg.

When constructing your own bibimbap, I suggest selecting 4 or 5 vegetables. Any combination of pickled, fresh, or cooked veggies is good as long as they all complement each other. For my bibimbap, I chose bean sprouts, pickled ramps, pickled chicken of the woods mushrooms, sautéed carrots, and some charred radicchio. I settled on some venison I had in the freezer for the meat. I chopped a 3-ounce venison steak into small quarter-inch cubes, and then marinated it in gochujang chili sauce.

Gochujang chili paste is a new ingredient for me and I have been playing around with it for the last few months. Unlike other chili sauces, gochujang isn’t just chilies and garlic—it also has rice in it for a thicker texture, more like a tomato paste. I have been using a variety made by Chung Jung One and have really been loving it. I use the gochujang in the marinade for the meat and also made a gochujang date sauce to go with the bibimbap.

Rice is a very important part of this dish so make sure you’re not using minute rice and buy some good, quality white rice. Top the whole thing off with an egg and you are all ready for Bibimbap. No disrespect to the Good To-Go people but I think my version of bibimbap is in the running for the best bibimbap I have ever eaten.

This recipe is for one bowl of bibimbap, so if you are going to make this for a group just multiply the recipe by however many servings you would like.

1 oz. carrots cut into matchsticks and sautéed for 30 seconds in 1 tsp sesame oil

1 oz. radicchio, tossed in olive oil and salt and charred on a grill then chopped

Gochujang Marinade for the Venison

Mix the marinade together and add the meat. Allow to marinate for 15-30 minutes before using. When you are ready to cook the meat, heat 1 tablespoon of canola oil in a pan over medium heat and add the meat. The meat will cook very quickly—it only takes about 2-3 minutes.

Place the dates in a small sauce pan and cover with hot water. Let stand for ten minutes. After ten minutes, add the dates and 2 tablespoons of the water to a food processor, along with the remaining ingredients. Pulse until smooth.

Scoop the rice into the center of a large bowl and arrange the cooked meat and vegetables around the outside. Place the cooked egg in the center and serve with a side of the gochujang date sauce. Add as much or as little of the sauce as you like and stir together in the bowl.