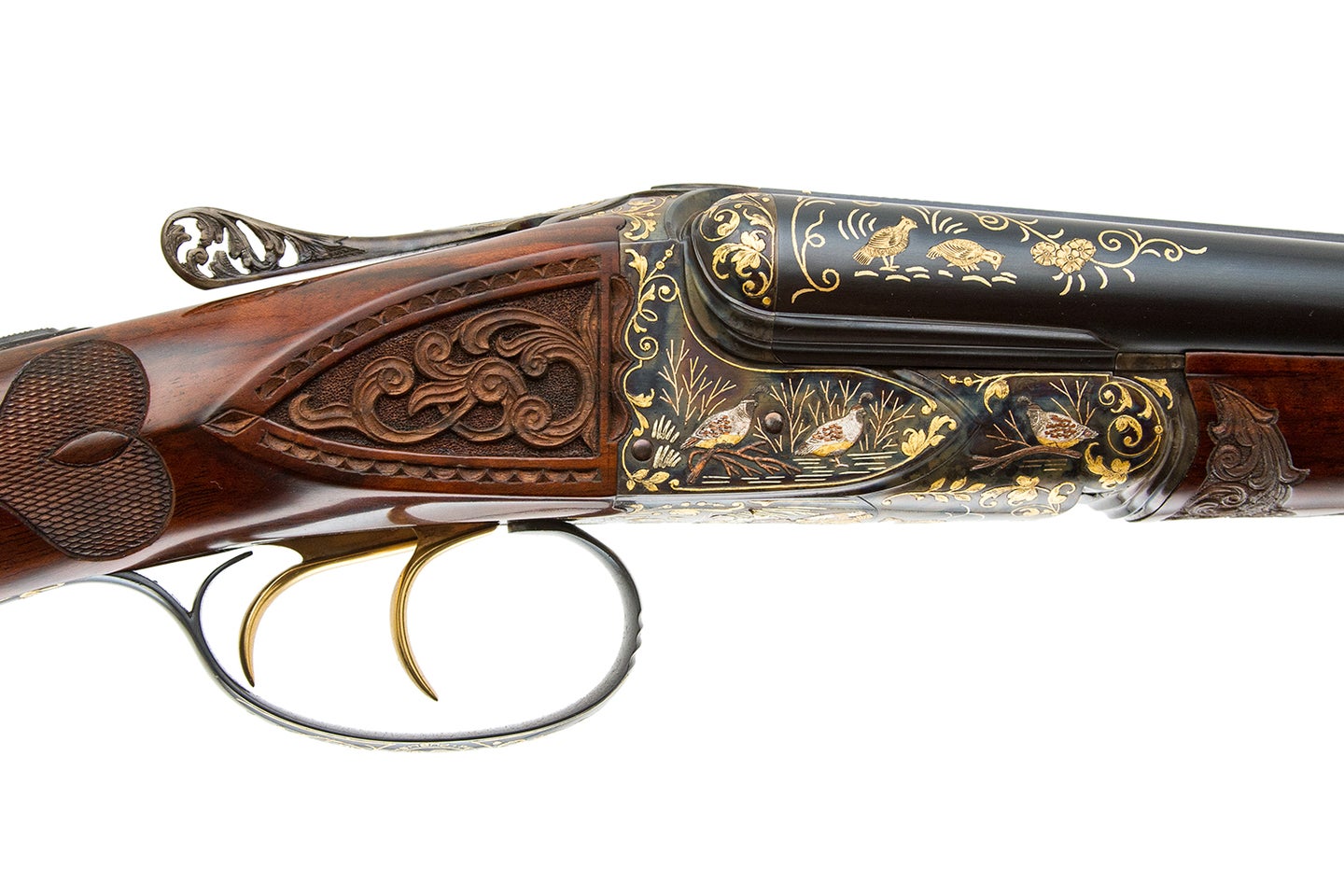 This .410 A.H Fox is part of the Steve Barnett collection and costs upwards of $35,000. Teve Barret Fine Gun Collection
SHARE

For modern duck hunters, the semi-auto shotgun is king. But from the late 1800s until the first half of the 20th century, the side-by-side was the shotgun of choice for American waterfowlers. And U.S. companies, like Parker, A.H. Fox, L.C. Smith, and Winchester, built the best doubles for duck hunters, though you can’t discount the elegance and precision with which the British and other European manufacturers designed side-by-sides (some of the most impressive bespoke doubles come from western Europe). But the American companies knew their customers better and understood what those early duck hunters required in a shotgun built of wood and steel: weight, long barrels, and fixed full chokes.

Many old side-by-sides are just as functional in a duck blind today as they were a century ago—you just don’t see them as much. What follows are the best double guns ever engineered for the American waterfowler.

Charles Parker was an entrepreneur and manufacturing wizard who ultimately built some of the finest shotguns in American history. Many are still in use today. Parker Brothers built long-barreled and tightly-choked guns for waterfowl hunting, but they never built a true waterfowl model. The closest was their “Live Bird Gun” designed for pigeon shooting. Shooting competitions featuring thrown live pigeons were popular in the late 1800s and early 1900s. For a hit to count, the bird had to fall within a designated ring on the pigeon field. Even if you killed the bird and it fell outside the ring it counted as a miss. Shooting a bird quickly and putting it down fast was a must and the Parker guns did it well.

These shotguns sported long barrels (34 inches), double triggers, and had no safety. Famed outdoor writer Nash Buckingham shot this model for years before acquiring his famous “Bo Whoop” Super Fox. Buckingham liked to stretch his range on uncooperative mallards and a gun with heft (the 12-gauge Live Bird Gun weighs just under 9 pounds) and barrel length of the Parker was more cooperative for long-range work.

Ansley Fox was a relentless perfectionist. He called his guns “the finest in the world” and while that is debatable, what is not in question is the superb quality built into every Fox double.

Fox’s waterfowling masterpiece was called the Super Fox, introduced in 1923. The Super Fox had 30- or 32-inch barrels choked full. The birth of this gun was tied to the Western Cartridge Company, owned by the Olin family. John Olin loved to hunt waterfowl and developed his Super-X shotshell in 1921, loaded with copper-plated shot, which produced shorter shot strings and delivered more payload at once.

Olin used several guns while testing his new shells, but settled on a Fox with barrels engineered by Burt Becker. Becker, a renowned Philadelphia gunsmith, specialized in barrel making and was skilled in creating over-bored, tightly choked barrels. Once he saw the performance of this gun and shell combination, Olin sent the shotgun and test loads to Buckingham, knowing he would like the results and write about Olin’s new super shell. Buckingham ended up ordering the shotgun for himself. That gun became the legendary Bo Whoop, the most famous shotgun in American waterfowl history.

The Super Fox was offered in several grades following an alphabet pattern, A, B, C and so on. Bo Whoop is an HE-grade. The “E” stands for ejectors instead of extractors. Super Fox shotguns are rare. Only about 300 were produced over a 20-year span.

Lyman Cornelius Smith made a fortune with the Smith-Corona typewriter, but before that he built guns with his brother Leroy and W.H. Baker in the late 1800s. Leroy and W.H. left to form Ithaca Gun Company and L.C. built shotguns under the Baker name until 1889 until John Fulton took over and built L.C. Smith branded shotguns under Hunter Arms.

In 1924, Hunter Arms decided to compete with the Super Fox and brought their own double gun to market. Dubbed the Long Range Wildfowl, the new L.C. Smith featured 30- and 32-inch barrels with full chokes and was available in 3-inch chambers. Like many of the doubles before it, the Wildfowl exceeded 8 pounds.

Hunter Arms’ advertising campaign for the Long Range Wildfowl sported the headline: “The New Gunning Thrill of Dropping ’em at 80 Yards!” Of course most hunters don’t have the skill to shoot a bird at that distance, but exaggeration has always played a role in marketing products to a mass audience.

Once John Olin controlled Winchester, he wanted to build a shotgun that paired with his Super-X ammo: enter the Winchester 21 Heavy Duck. It was overbuilt to withstand the daily beating of heavy duck loads and the abuse duck hunters put their guns through. The other gunmakers of the day had a substantial head start on Olin and his mighty 21. Their duck models had been out for decades before the first 21s came along in 1930. But the gun enjoyed success because it was built so well.

The 21 has no engraving on standard models and walnut furniture encases the steel receiver and barrels. Higher grades could be ordered but most Heavy Ducks were standard single-trigger models with 30- or 32-inch barrels choked full. Pistol grip stocks and beavertail fore-ends were standard, though a few custom orders departed from that configuration.

Winchester did make its Japanese manufactured Model 23 in a Heavy Duck version. They are fine guns for less money, but were only made for one year (1984), and just 500 were produced. The 23 is built on a boxlock action, and sports 30-inch barrels that are choked full. Some barrels were later converted to accept screw-in chokes.

Few gunmakers build waterfowl-specific side-by-sides anymore, but the old doubles still come out in places like Mississippi’s Beaver Dam, which provided the backdrop for so many of Buckingham’s tales. Guides Mike Boyd and his son Lamar, who own Beaver Dam Hunting Services, both love vintage doubles and still shoot side-by-sides on occasion. Bo Whoop, which was donated to Ducks Unlimited, has made several trips to the organization’s blind in the cypress breaks at Beaver Dam Lake.

“Fox guns and Parkers are both excellent, but I lean towards the Fox,” Boyd says. “It’s like this: A Fox is that pretty girl you knew in school who could cook and worked hard, the one you wanted to take home to Momma. Parkers on the other hand are the head cheerleaders, beautiful to look at but not quite as easy to get along with.”