The withdrawal of H.R. 621 is a victory for conservation and public lands 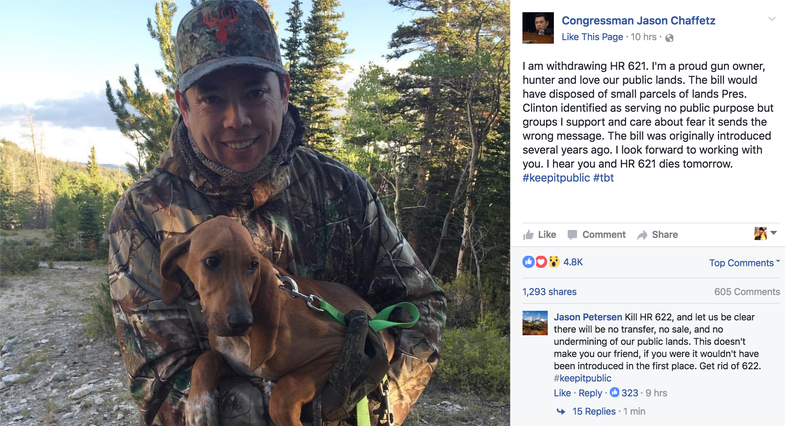 In a message on his Facebook page, Jason Chaffetz (R-Utah) announced that he would withdraw H.R. 621, which would direct the Secretary of the Interior to sell off 3.3 million acres of federal land. Chaffetz introduced the bill on Jan. 24.

The congressman posted the following message on his Facebook page last night: “I am withdrawing HR 621. I’m a proud gun owner, hunter and love our public lands. The bill would have disposed of small parcels of lands Pres. Clinton identified as serving no public purpose but groups I support and care about fear it sends the wrong message. The bill was originally introduced several years ago. I look forward to working with you. I hear you and HR 621 dies tomorrow. #keepitpublic #tbt”

Chaffetz posted the comment with a photo of himself dressed in camouflage.

In 1997, the Clinton administration identified federal land that could be “disposed” in order to raise money for the restoration of the Everglades. That land disposal never happened—and it seems that for now the attempt to dispose those lands has failed again—but you can find an overview of the public lands listed from 10 western states on Chaffetz’s Congressional Website.

Chaffetz wasn’t specific about the sportsmen’s groups in his message, but there is a coalition of outdoor companies and organizations supporting SportsmensAccess.org, a petition that opposes the sale or transfer of federal lands. The coalition includes Simms, Trout Unlimited, Quail Forever, Sitka, Old Milwaukee, National Wildlife Federation, Kimber, and many others. The petition now has more than 45,000 signatures.

Facebook posts about the introduction of the bill from Outdoor Life and Field & Stream were shared almost 3,000 times. Other heavy hitters with large social media audiences like Steve Rinella and Joe Rogan also posted about the bill and received a surge of likes and shares from followers.

“Short sighted politicians are proposing selling off our public lands. Don’t let it happen,” Rogan posted on his Facebook page on Jan. 30. That post was shared more than 6,000 times.