What this West Virginia Angler is Doing to Restore Brook Trout

Saving a small fish requires the biggest of dreams 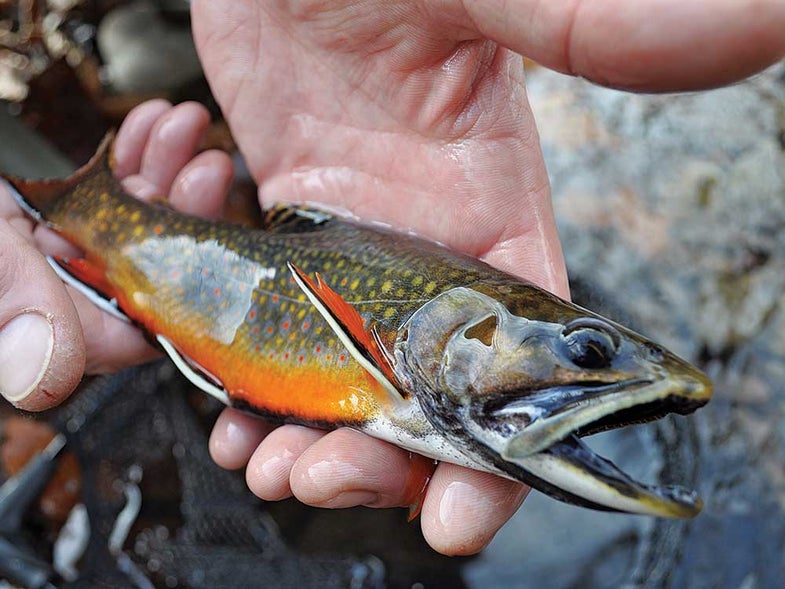 Asking another angler to reveal his hotspot is the ultimate breach of fishing etiquette, and I was guilty—a heinous blunder at first handshake. Impressively, Dustin Wichterman avoided the clichéd if-I-tell-you-I’ll-have-to-kill-you response. Instead, he pointed generally into the hills surrounding our campground in West Virginia’s Eastern Panhandle.

“Up there. It’s not far, just a short drive,” he says. “I want to show you a few places where we’ve been doing some work.”

The “up there” of Wichterman’s narrative were trout streams, approximately 100 “patches” of which lay within the region generally referred to as the Potomac Headwaters. A patch—or a stretch of stream where genetically interconnected populations of brook trout live—can be as short as ¼ mile or measure 10 miles. As the Potomac Headwaters program manager for Trout Unlimited, Wichterman, along with a staff of 13 and a long list of partners, has been working side-by-side with area landowners to restore degraded brook trout habitat. The Home River Initiative is an attempt to reconnect isolated headwater populations of native fish with main-stem rivers in an effort to increase the size and health of the native fish populations. That’s the soulless, biological explanation. Wichterman’s true motivation is more deeply felt.

“When your daughter looks at you and asks if you’ll take her to the water, your heart melts and your spirit celebrates,” says the 31-year-old, as he ties on an Eastern Green Drake. “That’s really why I work for Trout Unlimited—our missions align. And the places where natives live need help.”

The drive was indeed a short one, and the single-file walk to the first nameless stretch of stream and plunge pool even shorter.

“We just need to get past where the six-packers fish,” Wichterman says. “There’s not a bunch of fishing pressure up here, but most guys will only go as far as a soft drink or two will take them.”

Of all the fish in all the land, brook trout may be the least respected. They are not big, nor are they especially wary. In fact, trout-fishing elitists are often quick to sneer at them as not really being trout at all, but rather a member of the somehow less sophisticated char family. But for their devotees, brook trout are synonymous with wilderness—albeit a shrinking one.

“Trout habitat is made up of clean, cold water,” says Wichterman. “They prefer a temperature range between 50 and 70 degrees. But their habitat is disappearing, and that’s what we’re trying to restore.”

Blast From The Past

The country beyond six-packer territory felt promising. A thick canopy of leaves and cool, rushing water plunged the air temperature 10 degrees on the hike to the first fishy-looking pool. Wichterman took the first shot and deftly landed his fly along a submerged log at the head of the pool. A solid brookie rose to intercept.

“That simple, huh?” I asked. “Guess we need to move along to the next pool.”

“Heck no,” Wichterman said. “There should be a bunch more.”

He was correct. For the next 30 minutes, we took turns working a mere 20-yard stretch of stream, until the fading daylight spoiled the fun.

“It’s amazing what a healthy brook trout stream can produce, isn’t it?” says Wichterman. “This is a classic case where we’re working closely with the landowner to ensure that this stream stays healthy. A guy could literally walk for miles upstream and hit little pockets just like this. Downstream—way downstream—this becomes the Potomac River.”

A partnership with the U.S. Fish and Wildlife Partners program helps realize on-the-ground accomplishments for the Potomac Headwaters program. Though victories for Wichterman’s team are many and impressive—reestablishing natural flow to 1.5 miles of stream on public land; restoring 9 miles of in-stream habitat using native rocks and logs; reconnecting 17 miles of headwater sources; perpetually protecting 1.5 miles of stream and 200 acres of riparian habitat; installing 20 miles of fence to protect 15 miles of trout habitat—there remains much to do.

“It takes about two years of work to do two weeks of construction,” he says. “My dream, and one that I have for my daughter Brooklynn, measures about 2 feet long. That’s about the length of the fish that used to be caught here.”