Washington Deer Hunter Shoots a Buck, Then Three Wolverines Chase It Off a Cliff

After backing off a blood trail in the backcountry, two bowhunters watched three wolverines swoop in for an easy meal 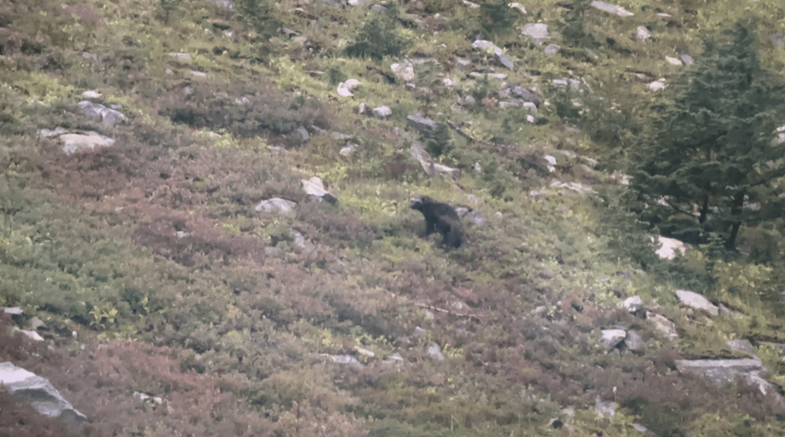 One of the wolverines that chased the mule deer buck off a 150-foot cliff. Kyle McGill / Travis Van Noy
SHARE

Most hunters who spend time in the backcountry have experienced some awe-inspiring—and occasionally bizarre—encounters with wildlife. Still, there aren’t many backcountry hunters who can say they’ve witnessed a trio of wolverines move in on an animal they’d shot and then chase that animal off a 150-foot cliff.

“It was just so cool, so crazy,” Aaron Van Noy told NW Sportsman Magazine, referring to his run-in with the predators this fall in Washington’s North Cascades.

It was early September, and Van Noy was deep in the Glacier Peak Wilderness with his hunting partner Kyle McGill. It was only the first afternoon of their hunt when they spotted a mule deer buck, still in velvet. Van Noy was able to sneak within range of the deer and loose an arrow, but he hit the buck a little farther back than he wanted.

It looked to be a lethal shot, but not wanting to bump the buck, the two hunters returned to camp that evening to wait before recovering the deer. Van Noy says they were finishing dinner and sipping a bit of whiskey when he looked up to see three dark mammals scampering and sniffing their way along the blood trail—and toward the last place he’d seen the buck.

“Holy shit, three wolverines!” said McNoy, immediately realizing where the trio was headed, and that there wasn’t much he and McGill could do given the circumstances.

After a long night of little sleep worrying that the wolverines had bumped the buck, the pair hiked to where they had last seen the buck, and what they found that morning was more akin to a crime scene than a blood trail. The area where the buck had bedded down was full of tracks and drag marks, and at first the two hunters had no clue where the deer might have run off to. Then it clicked: They were standing beside a 150-foot cliff. Peering down, they could see the deer piled up on a root wad at the base of the cliff.

“Basically, the buck jumped off the cliff,” Van Noy explained. “There were some guts in a tree. Suicide mission: ‘I’m jumping.’”

Van Noy and McGill then hiked down to the base of the cliff, where they noticed that in addition to eating most of the velvet off the antlers, the wolverines had chewed up parts of the buck’s snout, neck, tail, rump, and leg. The hunters were able to salvage roughly 70 pounds of meat along with the head before returning to camp.

Just to cap off the experience, Van Noy was attaching his tag to the buck and getting ready to hike out the next morning when he spotted the three wolverines again. This time the predators were hunting hoary marmots along the same ridge where they had come across his buck.

“It seems as wild as it could possibly get,” Van Noy said of the experience. “It’s all pretty magical.”

You can read the full story of the hunt and see photos here, via NW Sportsman.