After doubling down on a reclusive buck with a 10-acre home range, Steve Leeper finally intercepted the unusual deer in early December 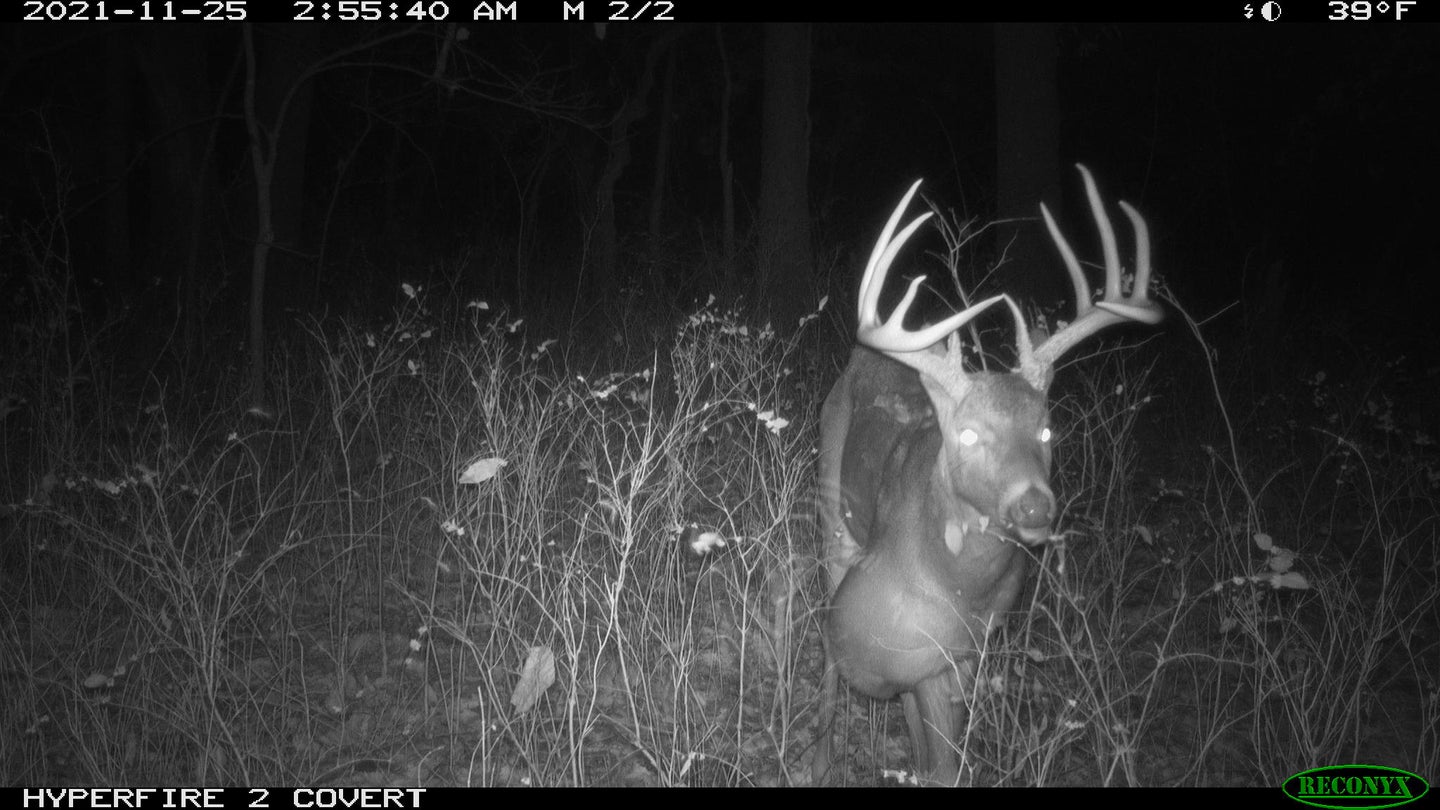 A cell-cam photo of the big Missouri buck with a fast-growing mass clearly visible on its right shoulder. Courtesy Steve Leeper
SHARE

Steve Leeper’s deer season was plagued by poor timing. Nothing went wrong, exactly, but it didn’t feel right, either. Then, in November, things got really weird.

It wasn’t until mid-October that Leeper and a buddy got full hunting access to a new 80-acre property in west-Central Missouri, where Leeper had swapped chores for hunting permission. As soon as they did, the bowhunters hung three cameras and two stands, and cut rudimentary shooting lanes. That same night, a cell camera delivered a photo of a stud typical buck with 11 points. More photos arrived in the following days, but just as Leeper started to pattern the buck’s movements in early November, he had to leave town for nearly two weeks. Leeper owns his own insurance agency in Kansas City, but he’s also a part-time cameraman for Heartland Bowhunter. He was scheduled to film a hunt in Kansas, then meet his brother on another trip. While Leeper was on the road, trail cam photos of the big typical continued to trickle in. Then he noticed something odd.

The buck had looked perfectly healthy before mid-November, but now photos showed a mass on the deer’s right shoulder—a big one.

“It’s during the rut, so your mind starts racing—was he in a fight?” says Leeper, who was almost positive the buck had been injured. “He started getting a little less regular, and I’m like, Great. He was slowing down, he wasn’t chasing, so I knew something wasn’t quite right.”

It’s not uncommon for a deer with a lump or a moderate growth to show up on trail camera; hunters across the country get these kinds of photos every season. But additional photos clearly showed that the mass on this deer was growing at an alarming rate, until it was roughly the size of a basketball.

“I could tell this buck was just getting run down,” says Leeper. “That always happens during the rut, but you could tell there was something else going on. This buck is hurting. Then my mind really starts wandering. If I don’t get this buck soon, he could die somewhere and that’s the last thing I want to do is find this deer dead. He was the one deer I really wanted to go after. Even if he does makes it, will he shed? Will his antlers grow back normally? I felt like I was really on the clock.”

So Leeper doubled down. Now that he was back in town, he hunted when he could. Around Thanksgiving, he glimpsed a mature buck through a screen of cedars. At the time, he thought it was the big typical. But as days passed without any more trail cam photos of the buck, Leeper started to doubt himself. Maybe the buck had died from its injury, or been killed by another hunter.

Finally, in the first week of December, the buck reappeared on camera. The growth that had ballooned on his shoulder was shrinking.

“It must’ve popped some, or something. But he still looked bad. I mean, almost like hunched—he was just hurting,” says Leeper, who had only a month left of bowseason. “At that point, I was like, Okay he’s alive. I just have to figure this out.”

Leeper started sifting through all the photos of the buck, looking for any intel that could help. Each had been taken at night, and the deer seemed to bed mostly in a nasty sapling thicket on the east side of the property. Almost every time the buck left, another photo showed him returning to bed a few hours later. It seemed as if the buck used only 10 acres—at most—of the property.

On Dec. 9, Leeper took the day off work and arrived to the farm by 10 a.m., armed with extra cameras. He walked the east property line, hanging cameras and checking trails for signs the buck might be slipping off the farm. When he finished his scouting mission, Leeper backed out and snuck onto the west side of the property. Maybe his recon had bumped the buck over to the west side, and he could catch him returning to his core area.

By 2:30 p.m., Leeper had settled into his north-facing stand in the cedar thicket in the center of the property. It was a makeshift hang-on stand, with a set of climbing sticks and a climber stand that he’d strapped to the tree weeks before (every store had been out of hang-on stands). He’d bumped a doe on his way in, and watched a few others from his seat. But it wasn’t until 4:30 p.m. that Leeper knew he was finally in the right place at the right time.

The 11-pointer appeared at 40 yards on Leeper’s left, and he reached for his bow. The buck was picking its way slowly toward the east side of the property. As the buck stepped into one of the hastily-cut shooting lanes at 37 yards, Leeper grunted quietly.

“He blew through my lane where I wanted him to be,” Leeper says. “I grunted too soft, and he walked through it too fast, and I didn’t feel comfortable. I also didn’t grunt too hard though, to see if he would work his way toward me, like other deer there had.”

The buck took 10 more steps, then stood in the underbrush for several minutes, watching something to the north. Leeper, who thought he’d missed his chance, pulled out his phone to text his buddies about it and shoot a little video. As he watched the buck and looked around the timber, however, he realized he might be able to make one other shooting lane work.

By the time a couple of the turkeys the buck had been watching waddled into view, Leeper had eased into a seated position on the climber and analyzed the shot he hoped to have. He would have to thread an arrow over one near limb and under another, farther branch. When the buck stepped into the narrow lane, Leeper grunted louder this time. The deer took two more steps and stopped at 43 yards—with its head and front shoulders behind a tree trunk. Its heart was obscured, but enough of the lungs were still exposed for a clean shot. Unnerved as the deer had been by the turkeys, and worried the grunt would spook the deer more, Leeper figured the buck would try to duck the string. So he aimed a little low, and released.

Instead, the buck stayed perfectly still as the arrow struck precisely where Leeper had settled his pin. Later, he would decide this was because the tree had interfered with the buck’s usual defenses—it couldn’t hear the arrow or spot a blur of movement.

The buck tore off, jumping two strings of barbed wire and crashing through the brush to the south of Leeper. At 60 yards, the buck stood still, and Leeper watched through his binoculars, willing the deer to wobble. He could see the wound channel, and was satisfied that although it was a little low, it was still lethal. After a minute, the deer walked into a brush-choked ditch and disappeared.

Eventually, Leeper climbed down and walked to the north to check the spot where he’d shot the buck, hoping to find his arrow. The 6-inch pile of leaves where the buck had stood appeared to have swallowed it, but he did see good splashes of blood on a mown path. He left his quiver to mark the spot and backed out.

In the morning, Leeper picked up the trail and unraveled it slowly, even crawling on his hands and knees at times to navigate the brambles. He found one spot where it looked like the buck might’ve bedded, and then the buck itself, piled up in the bushes.

Leeper’s buddy Mike Hunsucker, co-host of Heartland Bowhunter, joined him to help drag out the deer. Just as Leeper was almost done dragging the buck 60 yards out into a clearing, its right antler popped clean off the buck’s skull. Studies show that injured bucks can cast their antlers early, and Leeper was just glad he had killed the buck before that happened. Even with that hiccup, the buck rough scored in the low 160s.

“I’m sure that antler coming off has to do with that deer being malnourished and stressed to the point where his testosterone levels dropped enough that he’s just getting rid of his antlers,” says Kip Adams, a wildlife biologist and the director of conservation for the National Deer Association. “That’s very common in deer that are injured and stressed.”

With the opportunity to examine the buck up close, Leeper expanded on his injury theory: The buck must have been hit by a car, back in mid-November. There were bald patches of hair on its hide that looked like road rash, and the property was near a highway.

Read Next: Have You Seen These Deer Diseases In Your Local Woods?

Leeper picked up his 9-year-old, Dawson, from school that morning to see the deer. His son had nicknamed the deer “Pimple Popper,” and wanted to be the one to dissect the mass on the buck’s shoulder. He was slightly disappointed to find that the now softball-sized lump was full of what looked like white gristly and fat, and maybe some scar tissue. It’s likely the mass was a hydrocyst. Which, according to the Michigan DNR, is a “a fluid-filled cyst that occurs in the subcutaneous space, usually in the brisket area of a deer. It has been seen in the shoulder and hindquarter areas as well. The cyst develops in response to a traumatic injury at the site … Clinical signs observed with a hydrocyst are locomotor problems if the cyst becomes large enough (hydrocysts range in size from three inches in length and width to 30 inches in length and 12 inches in width) and hair loss between the brisket and front legs due to the constant rubbing.”

“Hydrocysts can be from different types of injury, and it’s possible that getting hit by a car could lead to that,” says Adams, who once killed a doe with a similar hydrocyst. “We almost always see those in the same location on a deer, kind of low on the front of the body.”

Regardless of the cause of the injury, Leeper says he was just glad that he was able to catch up to the buck when he did.