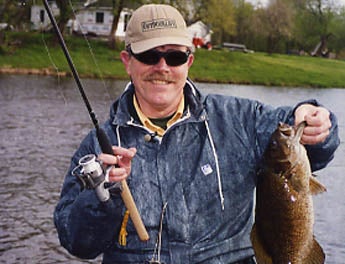 Afew miles upstream from where the St. Regis River empties its tannin-stained waters into the mighty St. Lawrence in upstate New York, there’s a small island that splits the river’s tumultuous flow. If you’re standing on that island on the right day in late spring, you can catch fat, dark smallmouths in any direction you throw a lure.

I know. I was there on such a day when almost every cast of a spinnerbait or tube jig was met with a jarring strike. I caught and released bass all morning while, 20 yards away, an inhospitable mother goose sat on her clutch of eggs hissing and watching me reproachfully from across the invisible line she had drawn in the sand. William Klute, the Mohawk guide with whom I fished, told me later that the bass would have bit just as well had the nesting goose not been there. I’m not so convinced.

Spring fling
That wild geese and smallmouth bass congregate at the same time in the St. Regis to perpetuate their species is a good clue for when you should fish there. The river runs sluggishly under ice in winter after it leaves the Adirondacks and heads in a meandering course northward through the St. Regis Mohawk Reservation. Once the ice starts breaking up around Hogansburg in late March, nature stirs. When the river’s temperature bumps the 50s, smallmouths move out of their deepwater haunts in the St. Lawrence and swim up the St. Regis to spawn. Perhaps they would swim all the way to the shadows of the mountains were it not for the small hydroelectric dam at Hogansburg that blocks them and causes a big jam of bass in its tailwaters.

That’s where Klute, fishing buddy Don Meisner and I found them that May morning when we fished from what we called Goose Island. I already had caught and released a few smallmouths that nudged 3 pounds when a bass engulfed the root beer-colored tube jig I was fishing and headed for a 5½-pound smallmouth-a personal best. Surprisingly, we never saw another angler out and about that day.

Although it’s a relatively small river and is narrower than 100 yards or so in most places, the St. Regis is nevertheless underfished.

Reservation waters (the Mohawks control about 14,000 acres in New York’s Franklin and St. Lawrence counties, through which the St. Regis passes) are home to a variety of species that include largemouth and smallmouth bass, walleyes, northern pike and muskellunge that reach truly scary proportions. Relatively few people other than the Mohawks fish the lower river, although there’s an access ramp near the river’s mouth. Klute hopes to change that. His Mohawk Trails Guide Service (518-358-4373) is set up to accommodate any type of angler, whether he’s after bass and walleyes in the lower river or brook trout above the dam.

Fishing is good for most species whenever there’s no ice on the river, but mid-May through June offers the best opportunities for smallmouths. Concentrate on the series of shoals that are flanked by downtown Hogansburg (population about 3,000) and downstream to the river’s meeting place with the St. Lawrence. Be sure to make Klute take you to Goose Island. If you find an upset mother goose on the island when you get there, all the better.