Josh Chrenko caught this spectacular "orangeback" on the Muskegon River. 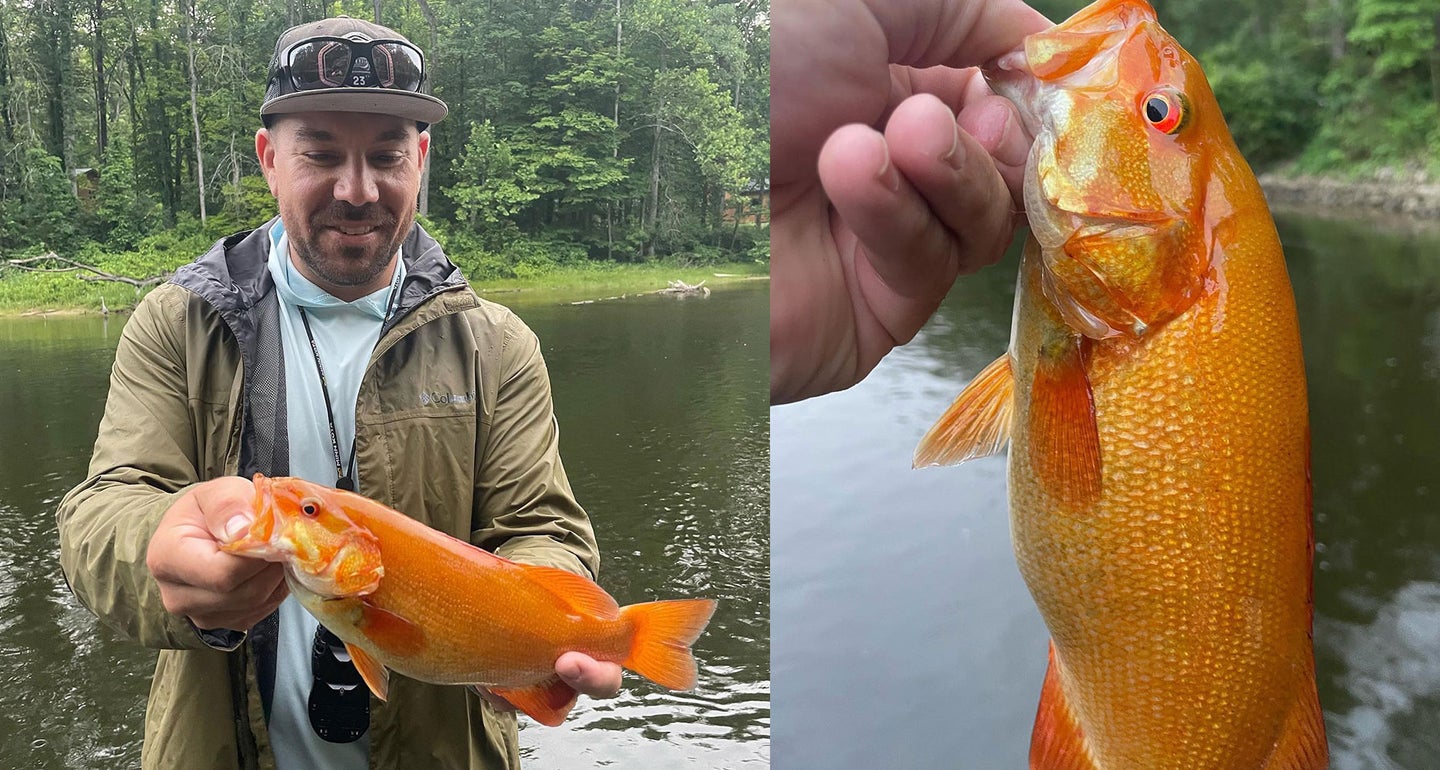 Josh Chrenko of Indianapolis is a hardcore smallmouth bass angler, but he’d never seen a fish quite like the one he landed on Michigan’s Muskegon River earlier this month.

Chrenko and a buddy had traveled to Michigan’s lower peninsula specifically to fish for smallies. During their trip, Chrenko caught a smallmouth in the 1- to 1.5-pound range that looked more like an oversize goldfish than a bass. Looking at the photos and videos that Chrenko shared on Facebook, the fish is solid bright orange and has an almost neon quality to it.

“Caught my first ever orange smallmouth. I am not making this up,” he says in a Facebook video. “This thing isn’t like kind of orange. It’s like neon, goldfish orange.”

The fish is so wildly orange that the distinctive vertical bars common to smallmouth are indiscernible.

The fish, which was totally healthy, was likely affected by a condition called xanthism (or Xanthochromism). This is a genetic mutation that causes an animal’s skin to turn orange or yellow. There are very few verified reports of xanthic smallmouth bass in the wild, and experts say such fish are extremely rare.

Chrenko says he may have a replica mount made of his bright orange smallmouth to remember the catch of a lifetime.

“Being neon orange would make for a tough life as a small freshwater fish where pretty much everything is earth tones,” Chrenko said on Facebook. “For someone who lives and breathes fishing for smallmouth, this is one I’ll remember my entire life.”

Other Examples of Brightly Colored Fish

In the last year, at least two other xanthic fish have shown up on social media. One was a golden-hued bluegill caught by Terry Nelson while ice fishing on Lindstrom Lake in Minnesota. Remarkably, ice angler Rick Konakowitz caught a similarly colored golden crappie on Clear Lake, Minnesota in February 2022.

Also, during the spring of 2021, Josh Rogers caught a golden largemouth bass while fishing Beaver Lake in Arkansas.