When you start filling your new tackle box this spring, pack some of these lures first. 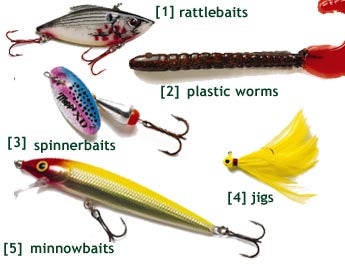 When Todd Smith gave me the assignment for this month’s column, I cringed. “Choose five lures that you could use to catch fish across the country and write about them,” he said. “No live bait or flies. Just lures.”

Five! You won’t believe how many kinds of lures I stuff into boxes and bags for one trip alone, and Todd, who has fished with me often, knows it. But after muttering something about an impossible mission and hanging up the phone, I had an inspirational flash. I’d pick five, all right, but they’d be five generic types that could be tweaked and fished a bunch of different ways to cover most bases.

Not all of you will agree with my choices, but in the right size and rigged for the circumstances they’ll catch just about anything with fins in fresh water and lots of stuff in inshore salt water. The five lures, in no particular order, are minnowbaits, plastic worms, jigs, spinners and lipless rattlebaits. Here’s why.

1. RATTLEBAITS
Bill Lewis’s Rat-L-Trap, with its built-in rattles, is the prototype of these lures. Rattlebaits excel for bass throughout the year, even in cold water in early spring when you’d think a fairly fast retrieve wouldn’t draw strikes. The lures were first used in open water because of their unprotected free-swinging hooks, but anglers soon learned that rattlebaits also can be fished around brush and timber and still come free if snagged. Fishing rattlebaits just above the tops of weed beds is a popular and productive bass-fishing technique. Though you can really burn these lures back at a high speed, a slower retrieve that just keeps them vibrating along is sometimes better, such as in murky water, where the rattles help bass zero in on the target.

When fish are lethargic, a rattlebait can be dropped to the bottom and jigged with short sweeps of the rod. This method will trick bass, walleyes, pike and muskies. I’ve caught king salmon on big rattlers. Matched with the right tackle that doesn’t kill the lures’ action, tiny lipless crankbaits will work in a trout stream or on crappies in the local pond. And you can troll rattlebaits of any size. Just don’t expect them to make it through vegetation weed-free.

2. PLASTIC WORMS
Plastic worms in all their various configurations have probably caught more bass than any other lure. Everybody knows about Texas-rigged or Carolina-rigged worms, but there are many other effective ways to rig these baits: wacky-style, drop-shot style or nose-hooked weightless to fish just under the surface when bass are in bank cover.

You can use a soft jerkbait such as a Slug-Go or Senko as a topwater bait or, by adding weight to the line (such as with a Carolina rig), make it appear to be a dying baitfish.

Cut a worm shorter-just the tail end of a ribbon-tail worm-and you have a skinny grub. It’s a killer when fish are keying on smaller minnows.

3. SPINNERBAITS
In the late 1800s, John Hildebrandt pounded out a dime and rigged it to one of his wife’s hatpins with a trailing fly. The result was one of the first in-line spinners, and Hildebrant spinnerbaits, including the famous Snagless Sally, are still going strong.

Spinnerbaits achieve great versatility through the number of blades used, blade type, finish and configuration. The type of skirt and its color are icing on the cake. Head weights are key to the lure’s depth. Today, using safety-pin-style spinnerbaits with heads that might weigh an ounce or two, you can slow-roll along the bottom in cold weather or yo-yo a ledge in summer when bass are picking off passing shad.

Still, there are more in-line spinner designs like the Mepps out there. And why not? They’ll catch everything from pumpkinseeds to giant muskies. Simplest of all are the non-weighted Colorado, Indiana and Idaho spinners. The Colorado spinner is a favorite among trout and panfish anglers, thouggh in larger sizes it will take salmon and bass.

4. JIGS
Once upon a time in American history, a jig was included in military survival kits. There was a good reason for that. Sized properly, jigs will catch everything that swims. A jig can be trimmed with all sorts of fish-attractive trailers. A plain jig, which is no more than a weight molded onto a hook, becomes deadly when inserted into a plastic worm, grub or tube. Depending on how and where it’s retrieved, a dressed jig with a skirt of marabou, silicone tentacle or bucktail represents a minnow, insect or crawfish to predators. Ultralight jigs rigged drop-shot or multi-dropper fashion are favorites for crappie fishing and will also take bass. Tip a jig with live bait and you have the darling of walleye anglers.

Jigs can be bounced, crawled along bottom or even trolled. A plastic-dressed jig cast and retrieved steadily with no twitches or pauses often makes a deadly presentation to bass, pike and muskies. Tiny jigs drifted beneath a float take trout and panfish. Slightly larger jigs below a larger float (bobber) nail bass, walleyes and any number of inshore saltwater species.

Heck, you can even drop jigs down an ice hole in winter and catch fish.

5. MINNOWBAITS
Think Rapala. Floater/diver minnowbaits belong in everybody’s tackle box because they’re so versatile and work for any species of fish that eats other fish. These hard-plastic lures can be twitched along on top, jerked to dive forward under the surface or just reeled in steadily with an occasional twitch to trigger reaction strikes.

When fish are close to the surface or in shallow water, you can troll minnowbaits without weight and get strikes. You can hitch a minnowbait to downriggers or planer boards to catch fish that are holding in deeper water. You can add stick-on weights to the bodies of minnowbaits to make them sink slowly or suspend at a certain depth where the fish want them. For really deep presentations, you can rig one on a bottom walker or a three-way swivel (with a sinker tied to a dropper line attached to one swivel eye). There’s no wrong way to fish minnowbaits.

[pagebreak] Those are my Big Five. You probably have a pet lure that wasn’t included-maybe a spoon or a topwater lure. But differences of opinion and results keep tackle stores in business and give anglers something to talk about. And that’s one more reason fishing is so darned interesting, isn’t it?

Jerry Says
If you change the hooks on a crankbait, make sure to test the lure’s action afterward. Hardware that’s too heavy can dampen the action. Be sure to wash crankbaits thoroughly in fresh water when you get home from a saltwater trip, or change out the hardware to stainless.

LIQUID GLOVES
You know how your fingers look after a day of fishing? Rough, right? Lots of hand lotion helps, but I found something better. It’s called Gloves in a Bottle-a lotion that you apply before you go fishing. It bonds to your skin’s outer layer and forms a shield that keeps in natural moisture, protects against irritants, and helps let skin heal. ($12.95 per bottle; 800-600-1881; www. glovesinabottle.com)