Look to the Southwest for the biggest trophies. 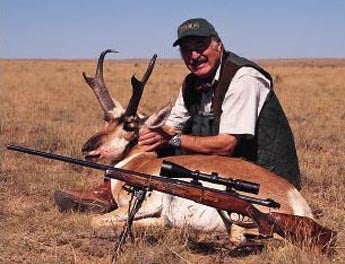 At one time, pronghorns might have outnumbered bison on the arid high plains of western North America. Biologists estimate that more than 30 million pronghorns lived on the continent in 1824. Within 100 years these unique ungulates, the only remaining members of a family millions of years old, were near extinction due to overhunting.

Fortunately, pronghorns persisted in scattered, remnant herds, and last-minute protection measures championed by sportsmen saved the species. Today pronghorns exist in huntable numbers from western Kansas to California, and from the Mexican border north into Canada.

The current Boone and Crockett Club world record is shared by two pronghorns. Both antelope came from Arizona, a state that produced four of the top five pronghorns in the records.

The most recent record-setter was taken by David Meyer in 2002. His buck tied the record of 95 points set by Dylan M. Woods in 2000. In the Winter 2003 issue of Boone and Crockett’s Fair Chase magazine, David Meyer recounted the story of his hunt for his record pronghorn. It began when a scouting team put together by Meyer filmed an exceptional pronghorn in June 2002. “We reviewed the films of this buck throughout the summer of 2002,” Meyer said in the article, “and could not believe the estimated mass measurements of this antelope, which neared fifty inches.”

When the hunt began that August, Meyer and his guide could not get within shooting distance of the big buck. Arizona’s clay and sagebrush plateaus left the hunters in view, even when crawling. On day two, however, after 12 hours of stalking, Meyer finally had an opportunity to shoot. He missed.

A few days later, Meyer was presented with another shot. He made the most of it. The antelope went down, and when the hunter and his companions caped the head, they realized that they had a special trophy. The pronghorn, which had been trapped and tagged earlier, was determined to be 3½ years old.

[pagebreak] Tips for Field- Judging a Trophy
These facts are used by many expert pronghorn hunters when assessing an animal in the field:

A trophy pronghorn is generally considered one with horns at least 16 inches long with a 7-inch circumference at the base. The prongs should measure at least 5 inches.

To estimate horn length, look at the animal’s ears and compare their length to the length of the horns. On an average mature buck, the ears measure about 6 inches from tip to base.

Horn length can also be compared to the distance from the front edge of the horn to the end of the antelope’s nose, which averages 8 inches. This is also a good feature against which to estimate the length of the prongs.

Judging horn circumference requires a broadside, front, or rear and quartering view of the animal. If the bases appear wide from the side and fairly thick from the front or back, they should score well in circumference points. The spread of the horns is not a scoring consideration, as it is with deer, and has no effect on the final score of the trophy.

Be sure the antelope you’re looking at has two complete horns. Bucks often break prongs and horn tips when fighting.

[pagebreak] Equipment Tips
Many veteran pronghorn hunters say the best pronghorn rifle is a reasonably light bolt-action chambered for a flat-shooting caliber. The .243, 6mm, .257, .25/06, .260 and .270 are all popular choices, with the .25/06 considered by many to be the ideal choice.

Equip a rifle with a good variable-power scope with a high-end magnification of 9X or better. It’s also a good idea to attach a bipod to the rifle or carry shooting sticks. The prairies and plains where pronghorns live offer few rifle rests.

Top-quality optics are needed to estimate the horn dimensions of a potential trophy. Most pronghorn hunters carry a lightweight binocular with magnificattion ranging from 8X to 10X, as well as a compact spotting scope with a magnification power of at least 20X.

The Bottom Line
Near extinction at the turn of the 19th century, pronghorns are no longer in danger. The current population is estimated at 670,000. This is a 40 percent decline from populations of the mid-1980s, however, and numbers continue to drop. Two of five pronghorn subspecies-the Sonoran pronghorn and Peninsular pronghorn-are considered endangered. Threats include drought, habitat fragmentation and degradation, and reduced fawn survival due to inadequate nutrition and coyote predation.