In order to kill coyotes routinely, you must do everything right: select the best stand location, watch the wind, make a difficult shot. But there are ways to stack the odds in your favor. 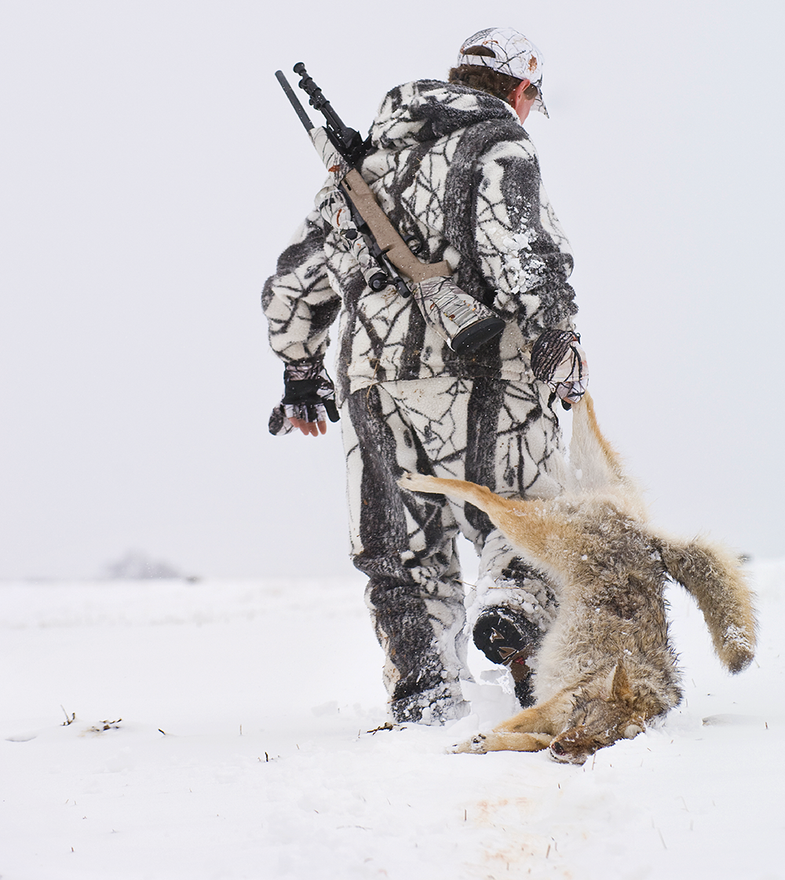 Coyotes are this country’s wariest game. They see, smell, and hear as well as anything, but it’s their cunning that makes them so darn hard to skin. Scores of novice hunters venture out after deer season sure they’ll kill a silly song dog or two. Most end up humbled. But there are a few men who have become obsessed with matching wits against America’s master predator, and over time they’ve developed tactics to take dogs consistently. Here are a few of their best.

RUN, GUN, THEN RUN AGAIN
Les Johnson of Hastings, Nebraska, may be the best coyote hunter in the world. He has a feel for the country like few others, and he can anticipate where coyotes live, and how they will respond to his calls. The host of the television show Predator Quest, and winner of multiple World Coyote Calling championships, Johnson’s hand calls are much livelier than any electronic recordings, and he seems to think like a canine, knowing just the right sequence, cadence, and volume to get a response.

Johnson, who takes several hundred dogs each year, says the basis of his success is mobility.

“I abide by my three-stand rule,” says Johnson. “If I don’t call in a coyote in three sets, I change strategies and switch to terrain that doesn’t look as good to my eyes, but there’s something that looks good to a coyote’s.” He also says timing is everything.

“Just like fishing,” he says. “Bass may only bite in a two-hour span. Coyotes can be the same. Often that’s the last two hours of the day, so I save my best stands for last.”

Finally, Johnson says, it’s an odds game, and he has the most success soon after he gets to a new setup. “Fifty percent of my coyotes come in in the first eight minutes of calling, and 30 percent come in from eight to 15 minutes. So if I’m in a tournament, I move to the next set after 15 minutes.”

HUNT THE CALVING GROUNDS
Hardcore predator hunter Jared Russell is often asked by local ranchers to help out when coyotes grow emboldened by hunger and begin overgrazing their cattle.

“I’ve seen coyotes work individual deer away from the herd, and it’s the same with calves,” says Russell, who prefers a .260 Rem. bolt rifle so he can reach across large hay meadows and cow pastures in the Oklahoma wind. “Where there are young calves in the area, you’ll find coyotes in nearby cover, such as woods and creek draws. So I call into that cover.”

On calling, Russell says that observing how non-target species react to specific sounds can be a key to predator behavior.

“Pay attention to the birds of prey in your area,” he explains. “When you find a call that gets the hawks’ and owls’ attention, you’ll start killing coyotes.”

CALL FROM A HEIGHT
Kerry Carver owns Carver Predator Calls. He does most of his hunting on open public land in Nevada, Arizona, and Utah.

“Where I call, wind is the main factor,” Carver explains. “Coyotes normally try to come in downwind, and knowing this, I play it in my favor when setting up for a stand.

“I’ll try to pick a stand with elevation so I can see and shoot. I sneak to my stand as quietly as possible, and then I keep movement to a minimum when I start calling. If you do these things,” says Carver, “you’ll kill more coyotes.”