Hunting With Airguns: A New Frontier

One constant through a century of regulated hunting in North America is that trends in technology create opportunity. We’ve seen... 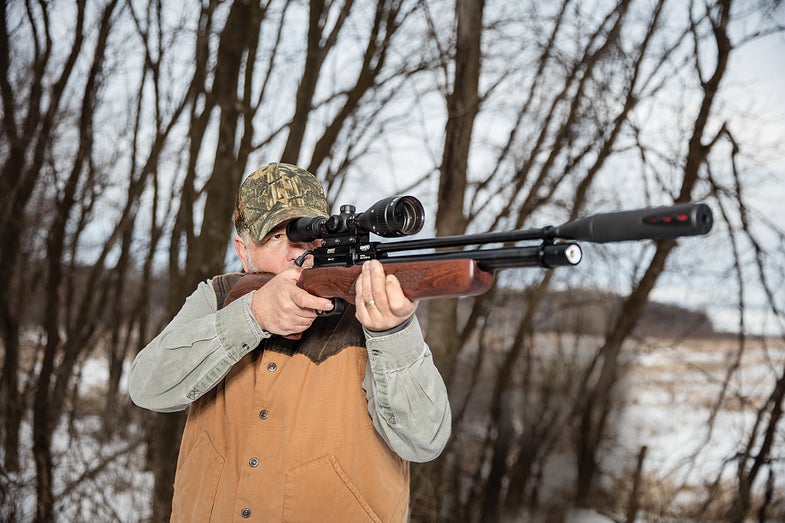 In order to maximize downrange impact and lethality, hunt with the heaviest pellet that shoots accurately in your air rifle. Ackerman + Gruber
SHARE

One constant through a century of regulated hunting in North America is that trends in technology create opportunity. We’ve seen it in the rise of archery-only deer seasons, as compounds created a market of archers itching to hunt with their high-tech bows. We’ve seen it with extended seasons to accommodate hunters shooting in-line muzzleloaders. And advances in crossbow technology have created new hunting seasons for horizontal bows in many states.

Now you can add airguns to the list of opportunity-creating technology.

In some states, new seasons and hunting areas are being established exclusively for airgunners. Other states are liberalizing regulations to allow air rifles to be used in existing hunting seasons. Fueling the trend are hunters looking for a new challenge or, in some cases, seeking a tool that allows them to hunt where firearms are not an option. High-power airguns are quiet, accurate, and lethal, and have a limited range. Simply put, they let you hunt where a powder-burner can’t be used.

Just to be clear, we are not talking about low-powered BB or pellet guns, but rather precision air arms performing at a level that would surprise those who have not been following the trend. Spring-piston rifles are used for small game and pest control, and pre-charged pneumatic (PCP) rifles for everything from small to large game with tack-driving accuracy, in calibers extending from .177 to .50.

The largest of these guns generate enough power to ethically harvest most species, with excellent results on small game, predators, turkeys, and even larger game, up to and including deer, hogs, and similar-sized animals.

This new generation of lethal guns is causing some states to reconsider their hunting regulations. Initially, few states addressed airguns at all, and if they did, it was usually to expressly prohibit their use for hunting game animals. Predators were viewed in much the same way; most states neglected to mention airguns as a legal method of take, or they outright banned them. But as larger-caliber airguns—producing anywhere from 300 to 700 foot-pounds of energy—have become commercially available, a community of airgun hunters wanting to pursue larger game has emerged.

As with any rapid evolution, the regulatory environment is elastic, with new or expanded regulations coming into effect every season. These regulations currently blanket the country like a crazy quilt; what is legal in one jurisdiction is expressly forbidden in another. This requires that prospective airgun hunters research the laws in the state where they intend to hunt, and to understand that even within the same state, regulations may differ based on region, dates, or species hunted. A detailed nationwide listing of regulations is outside the scope of this article, but here are some of the more interesting state regulations to give you an idea of current trends.

California: The Golden State was one of the first to explicitly allow airguns for hunting small game during rifle seasons. All small-game mammals and birds (including wild turkeys) can be taken with air- or gas-powered rifles. California has become the destination for airgunners pursuing turkeys, due to abundant populations and a liberal three-bird bag limit.

Arizona: The state’s wildlife department amended its regulations three years ago to allow not only small game and predators but also all large game (except elk) to be taken with air-powered rifles. This is the only state in the country where airgunners can take javelinas, Coues deer, and pronghorn antelope. Air rifles are also legal in Arizona for bears, mountain lions, coyotes, bobcats, and small game. Airguns allowed for small game and predators are unrestricted, but for the taking of big game, they must be PCP-powered and are required to be .35 caliber or larger. ○ Texas The Lone Star State has the nation’s best airgun hunting opportunities for predators and feral pigs. For some years, Texas has allowed airguns to be used to hunt exotic animals on private ranches, but until recently no game animals could be taken with air rifles. That’s changing. The state recently added squirrels to the list of species that can be hunted with airguns, and it is considering adding other game species to the list.

Virginia: Virginia has long allowed airguns for taking small game, but in recent years the state expanded its regulations to include all game. It is the only state in which an airgun hunter can take both a turkey and a whitetail on the same trip, and you can also hunt bears with an air-powered rifle here. Across the country, there are many grassroots organizations lobbying for changes in regulations to allow airguns to be used for small game, predators, and big game. As more hunters buy big-bore airguns, it’s reasonable to expect to see expanded hunting seasons.