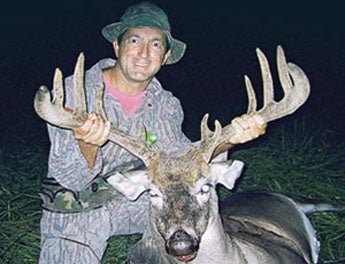 Like many hot spots for deer in the East, my site is remote. It’s a mile-long climb up a maze of old logging roads that crisscross a broad cluster of high hills on the eastern slope of Vermont’s Green Mountains. The hills have no rhyme or reason to them; a ridge heading north runs into a connecting edge that sweeps off to the east. Along the sidehills and shallow valleys, the thick forests can turn you around in a heartbeat, but it’s where the big bucks roam.

It’s eerie on top, where the old fields have resisted the forest. There’s sign of black bears who’ve broken branches off apple trees. And the bright deer rubs on the poplar saplings are signs that big bucks are vying for dominance.

This year I had placed my bowhunting stand in an old bull pine on the back edge of the highest field, where it overlooks a barway in the stone wall. A doe and her twins passed by the first morning I was in the stand. And on the third afternoon, a big deer had ghosted by me out of range, half hidden in the underbrush.

On the fourth day, a forkhorn approached, nervously watching his back trail. When he finally stepped forward, he looked straight up at me. I was torn-try to take this decent deer or let him pass and hope the big guy was behind him. After a long moment, he put his head down and offered me a full side view right at the base of my tree. I couldn’t resist, and my arrow flew straight into his flank just behind the shoulder.

After fifteen minutes, I climbed down, easily finding a good blood trail. Two hundred yards along, the trail disappeared, the scuffed leaves showing that my buck had taken a leap. I raised my eyes from the ground to scan the woods and staggered backward at the sight of a huge deer not 40 yards away, staring straight at me. He was calm and we locked eyes for a moment. Then he swiveled and walked off.

It took me a minute to regain my composure. I spotted the white of my deer’s tail, and then the form of his body on the ground as I approached. He was lying exactly where the big buck had been, probably dropping as his bigger rival watched.

Scouting is a Must
These are the scenes that play out in the remote mountainous regions of the Northeast. Heavy scouting is essential for first-timers. In places like New York’s Adirondack Park, Pennsylvania’s Tiadaghton Forest, Vermont’s Green Mountains, New Hampshire’s** White Mountains** and Maine’s North Woods, your best bet is to hunt along creek bottoms, river bluffs, swamps, areas of secondary growth, clear-cuts and abandoned logging trails.

I can scout my spot briefly because I’ve been hunting it for 25 years. I know where to look and what to look for. Close familiarity with a deer-hunting area is always an advantage, yet early on I spent much more time on the sidehills identifying runs, food sources and bedding areas and looking for scrape lines and favored rub areas. And any time you can spend acquiring that knowledge is time well spent.

Timberdoodle Time
I still make my trip to the area to hunt birds, walking for miles, carrying shotguns for the partridges (ruffed grouse) and timberdoodles (woodcock).

Northern hunters should be happy to see that woodcock numbers have stabilized after long years of decline. There are several new clear-cuts in the forests, sprouting young shoots of poplar and birch, and the birds have settled into them. But the numbers are not what they used to be and probably never will be again.

Every avid hunter in the Northeast knows of a buck pocket where the deer are big. And they have favorite spots that always hold birds. Professional biologists work hard to keep bird and deer numbers near carrying capacity. But there’s always the risk of a new housing development swallowing our favorite outdoor spots. That’s the reality of hunting in the most populous region on the continent.