Deer That Never Encounter Humans: How to Shoot a Reclusive Buck

More unicorn than whitetail deer, these bucks live their entire lives amid the solitude of the big woods. Here’s how to hunt them 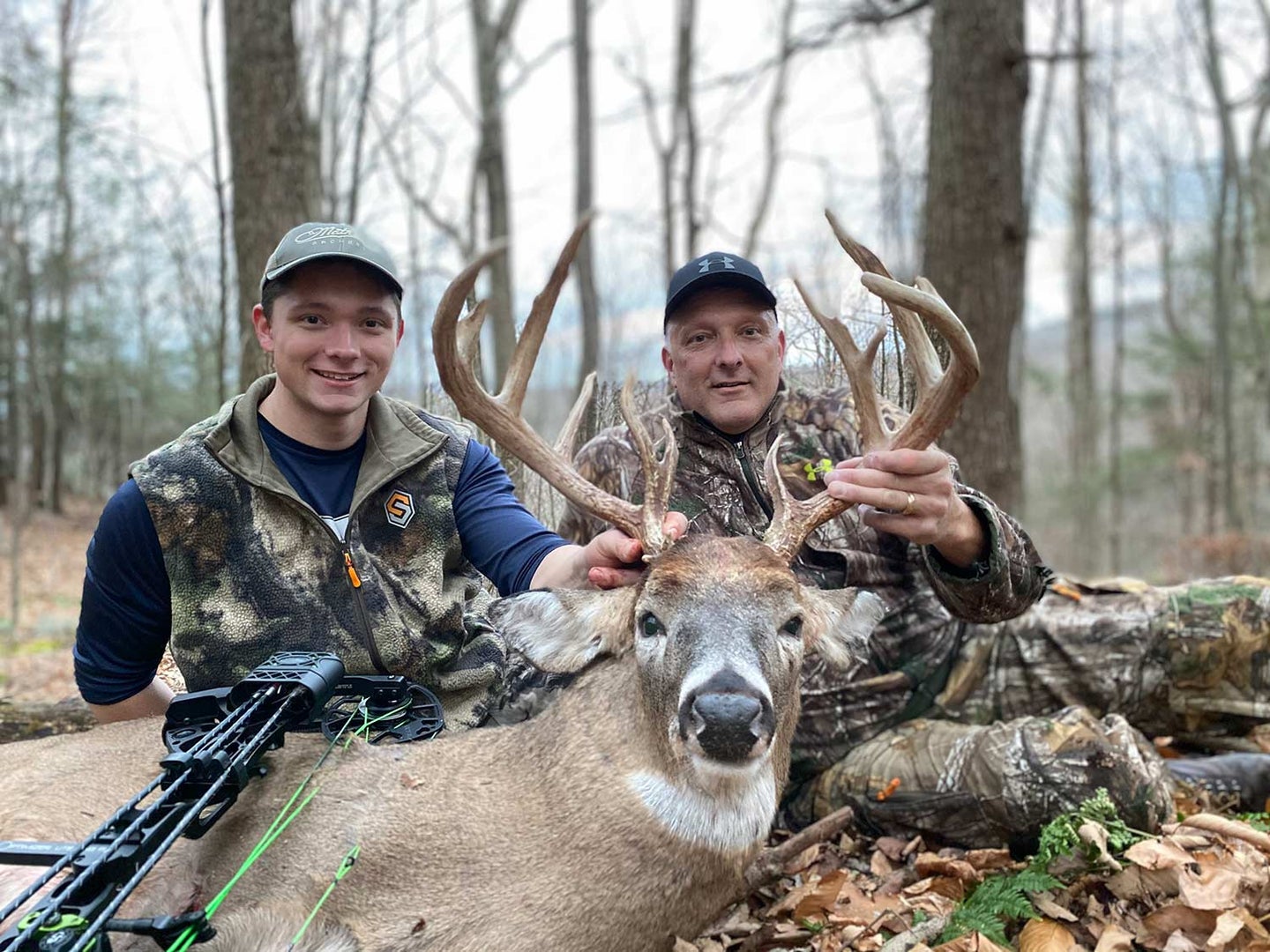 Ryan Rueff (left) and proud dad, Gary, prepare to haul his 14-pointer out of “Billy Goat” country in the Berkshires of Massachusetts. Ryan Rueff
SHARE

By rural Kansas standards, Charlie Braun’s 8-point probably would not have turned many heads. In Maine, it might have only risen to the level of “corker” or “slammer.” To me, though, the implausible life—and death—of Braun’s tank of a Massachusetts whitetail was more fascinating than its antlers or body size. It was more than a trophy to be hung back at camp.

My buddy Billy was the first one to bring it up after giving the buck the once over: “This deer might have never seen a human before.” Though Braun had shotgunned his monster on an old-fashioned public-land deer drive, it’s doubtful, Billy guessed, that the 4.5-year-old deer had ever seen a hunter in its entire life. That thought, and the fact that he may well have been right, simply boggles the imagination. Was it really feasible, in this day of shrinking habitat and suburban sprawl, for a whitetail deer to live its life that reclusively? Oh, we know that highly pressured deer are masters of avoiding hunters, but can they actually get into wild country where they’d never interact with humans at all? Further, where could those places be? Could it change, somehow, how the deer behaved? Most importantly, how would you hunt such a deer?

Where Could They Live?

“These are some pretty big woods in here,” Billy continued. “That deer never had to leave this 4,000-acre piece to live. He had plenty of food, water, and cover. Hunting pressure is low on both deer and turkeys here and, outside of the occasional summertime hiker that sticks to the marked trails, it’s lightly used. When we came along this morning, that deer had no idea what the hell we were.”

Heck, we’ve all heard stories about hermit bucks—deer that have died of old age rather than a hunter’s bullet. More common, though, are those giant deer that are seen by all manner of hunters and chased for years. The squadrons of game cameras that are spread throughout the country have made it even more difficult for deer to keep their presence hidden for long. Many big, old bucks have nicknames.

“My gut says that I haven’t ever met up with one of those deer,” says renowned hunter Mark Drury. “We manage 11,500 acres in the Midwest. It’s a low-pressure situation and although there is certainly minimal interaction between deer and humans, once they get past 4.5, they’re tough to run into—though they’ve probably seen us. Killing them is damn near impossible.”

Quality Deer Management Association conservation editor Kip Adams is dubious as to whether or not there are any expanses of wilderness in the Lower 48 that could hide such a reclusive whitetail.

“Maybe in Wyoming or in parts of far northern New England, but generally speaking most places just aren’t big and wild enough,” he says. “Now, I am aware of some Provincial land in Canada (Ontario and Saskatchewan) comprised of hundreds or thousands of acres that are, but in the U.S., it would be extremely rare.”

A fascinating Penn State study of hunter habits on a 114,000-acre portion of north-central Pennsylvania’s Sproul State Forest indicates that it just might be one of those wild rarities. Aerial surveys flown on the first, second, third day and first Saturday of the 2002 deer season indicated that 87 percent of deer hunters hunted only 57 percent of the land and all within one-third of a mile of a road. That would leave plenty of room for especially reclusive bucks to live a human-free life.

“Interestingly, I get that question at seminars,” says renowned Adirondack hunter Joe DeNitto. “My thought is that although it’s possible for a deer to go through its life without running into a person, it’s not probable—even in the Adirondacks. Even on that 4,000 acres that you were hunting. Think about it—that deer was probably not born there. Then, as a fawn, its mother instinctively kicked him into another range. It’s not that big a territory.”

Maine’s most famous deep-woods hunter, Hal Blood, is convinced that there are indeed whitetail bucks that go their entire lives without seeing humans.

“There are plenty that have never had any contact with people in the woods,” says Blood. “Most, though, have had contact with logging equipment up here. That doesn’t make them any easier to hunt, though, as they still travel long distances and are wary of anything following them. They might be slightly easier to hunt than pressured deer in that they will move about more during the day rather than just be nocturnal. But generally, they’re not.”

Can Where A Deer Lives Change Its Behavior?

Although the jury may be out, radio-collar studies provide a glimpse into the lives of big bucks and how they might act according to where they live.

“By using telemetry, we intended to find out where big bucks preferred to reside and how long they lived,” said wildlife biologist Bob Zaiglin. “You would think that visually relocating radio-collared deer would be easy—not so. Collared deer made few appearances. Over five years, one big buck was spotted only four times. From DNA data we now know that a few bucks are so reclusive they don’t even breed. They remain completely sheltered from interaction with man and even other deer.”

Adams believes that bucks that take on reclusive personalities and live in the big woods can, in fact, be easier to hunt.

“Up in Canada, for example, some of those deer with little human interaction can act pretty tame, showing little to no fear of man,” he says. “Sort of like the urban deer that we see in areas of the U.S.”

The Game Plan for a Recluse

So what is the best way to purposely hunt a giant reclusive buck if you live in the Lower 48? Here’s a simple five-step game plan.

1. Get Deep, Go Steep: Take a lesson from the Pennsylvania study on hunter behavior. Grab your GPS, get away from roads and easy access areas, and think like a buck. Where would you hide? One finding from the Sproul reconnaissance was that an area was 1.5 times less likely to be hunted for every 5 degree increase in slope. So, think steep.

2. Hunt Sheds: You’ll need evidence of a big buck’s existence to key in on his range. Think like a deer and look for shed antlers as soon as weather allows.

3. Hang Stands Early and Leave Them Season After Season: Don’t sweat it. You’ll likely to be hunting so deep that you needn’t be concerned with stand theft. But check your local regulations before leaving a stand in the woods.

4. Don’t Over-Hunt: Once you’ve found your spot, hunt only on opening day, during the five peak days of the rut, and on the last day of the season. Spend more time than that, and you’re likely to make a mistake and blow the buck out.

5. Only Hunt When Conditions Are Perfect: Watch the wind—always. It can help you shoot the biggest buck of your life.