The 2021 Deer Harvest Is Lagging in the Northeast. Biologists Blame Weather—and Acorns

Warm, wet weather and abundant natural browse could help explain why harvest numbers in most northeastern states are slightly down from last year 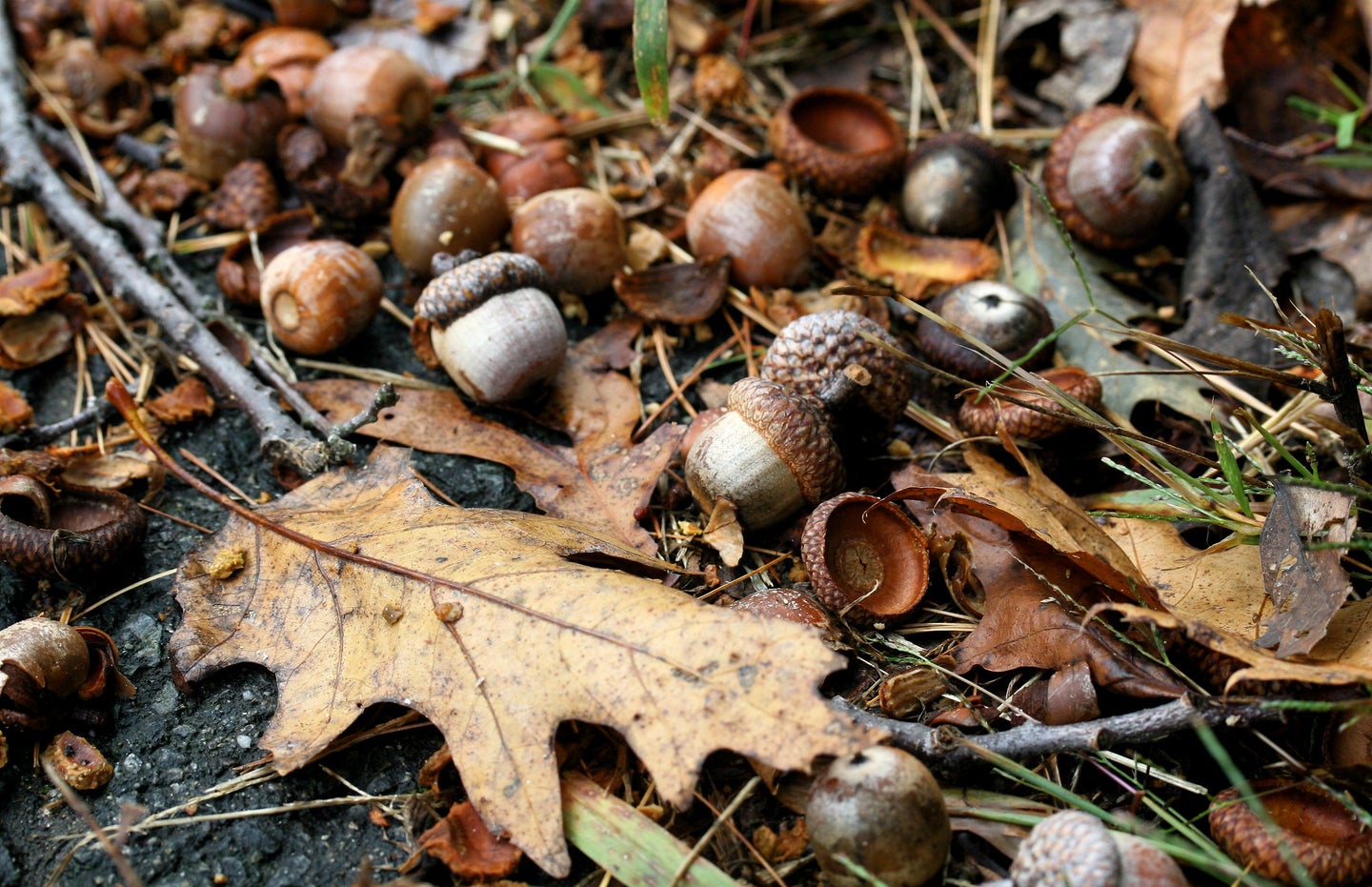 Acorns are a nutritious natural food source for whitetails, and some years they are more readily available than others. Liz West / Flickr
SHARE

There are so many factors that come into play when hunting whitetails that it can be difficult for deer hunters to determine why some years are simply better than others. Ask three different hunters why they’re not killing deer and you’ll get at least four different answers. Analyze enough of these answers, however, and you’ll start to see trends emerge.

So, with deer season well underway throughout most of the Northeast, Outdoor Life spoke with wildlife managers and deer biologists in six states to try to determine why some of them are reporting lower deer harvest numbers this year compared to last year. But be sure to keep in mind that these reports aren’t finalized. Deer season isn’t over yet, and there’s plenty of time for hunters to catch up.

Let’s start with Connecticut, where hunters got off to a slow start during the first month of archery season. At the end of October, the state reported a harvest of 1,055 deer, which is a 43 percent drop in the number of deer killed compared to the same period in 2020. These are the lowest harvest numbers the state has seen since 2015.

Wildlife biologist Andy Labonte attributed the lackluster start in Connecticut to warm and wet conditions, along with an abundant acorn crop in most of the state.

“I suspect the warm, wet, and windy weather and the abundance of acorns are the main factors in this year’s low archery harvest,” he told Field and Stream a couple weeks back.

In Pennsylvania, wildlife managers have a hazy idea of this year’s deer harvest. That’s because “unfortunately, the state does not provide any in-season estimates,” says Kip Adams, the chief conservation officer with the National Deer Association and a resident of Northern Pennsylvania. Even so, Adams says it seems like fewer deer have been harvested in his home state so far this year.

“I think it has far more to do with the incredibly warm weather thus far,” Adams says. “And warm weather impacts hunter numbers and hunter effort way more than it does actual deer movement.”

Adams also touches on the relative abundance of acorns in Pennsylvania when trying to paint a clear picture of why deer hunters there might be off to a slower start this year. He says that the correlation between the acorn crop and the number of deer harvested in any given year is always a hot topic among deer hunters—and that this is especially true in mast years, when acorns are especially plentiful.

“It’s interesting because where I am, right on the Pennsylvania-New York border, both our red oaks and our white oaks have very few acorns this year,” Adams points out. “But you don’t have to get very far south of me, in central Pennsylvania, and they’re having one of the best acorn crops they’ve had in a decade.”

Adams says these mast years can be a blessing or a curse for deer hunters, and that it all depends on where hunters like to hunt and how much they tend to focus on natural foods.

“If you’re in an area that has a lot of oaks and you have a really good acorn year, hunters like to really focus on this, which is a smart thing,” he says. “But I’ve been in situations where you have high oak numbers, great acorn production, and hunter sightings of deer were low simply because deer were not being funneled into any specific food source.”

“The flip side of that is if you’re in an area that has fewer oaks, but they are dropping lots of acorns, you can actually funnel some deer into some pretty good areas and see far higher numbers,” Adams adds.

The story is much the same in neighboring New York, where Jeremy Hurst works as a wildlife biologist for the State Department of Environmental Conservation.

“The number of harvest reports submitted by hunters, to date, is lower than last year,” Hurst confirms, saying that “warmer than average weather and abundant natural food sources” are the most likely explanations for the drop in statewide harvest numbers.

But deer season is far from over, he says, and regular rifle season in the Southern Zone doesn’t open until Nov. 20.

“And we don’t yet know if this early-season pattern [of lower harvests] will persist during the firearms season.”

Officials with the Massachusetts Department of Fish and Game did not respond to requests for comment, but since the state usually sees its highest harvest numbers during the shotgun season that takes place between Nov. 29 and Dec. 11, it might still be too soon to draw any conclusions there.

Still, the weather reports coming out of Massachusetts in recent months indicate that 2021 has been warmer and wetter than past years. Temperatures climbed into the 70s this month in Boston, where the average high-temperature in November is usually closer to 50 degrees.

This continued warm spell means that hunters in Massachusetts might have a hard time killing as many deer as they did last year. The state’s 2020 harvest report shows that last year’s deer harvest was up slightly from 2019, with 14,766 deer harvested statewide—which was a roughly 16 percent increase from the previous year’s harvest of 13,920 deer.

Read Next: The Science Behind Deer Movement Can Help You Kill a Good Buck This Season

Moving into the less populated states of New Hampshire and Vermont, the trend of low harvest numbers coupled with unseasonably warm and wet conditions continues. New Hampshire’s game program supervisor Ron Bergeron says that, as of the latest count, “we were about 20 percent below where we were last year at the same point in the season.”

“I think most of the decline we’re seeing from last year is weather related at this point,” Bergeron says. “Most of the hunters I’m talking to are still seeing a lot of deer, but the weather’s been pretty bad here. The start to the archery season was really warm, and it was pouring rain during the opening of our muzzleloader season.”

Wildlife officials in neighboring Vermont also mentioned the torrential rains that coincided with muzzleloader weekend. And roughly an inch-and-a-half of rain fell during the first weekend of the state’s rifle season, which opened on Nov. 13.

In terms of this year’s acorn crop, Bergeron says it’s been spotty throughout New Hampshire.

“We’ve had a lot of really good mast years the past few years,” he says, “and this one is a little closer to average, or maybe a little below average, depending on where you are.”

He adds that it’s difficult to compare this year’s harvest numbers to last year, however, since “last year’s total harvest was the fourth-highest we’ve had on record going back to 1922, and we’ve been seeing increasing harvest in New Hampshire for years now.”

It seems that the only outlier among northeastern states is Maine, where officials are reporting higher deer harvest numbers so far this year compared to last year. Which is extra notable since last year’s harvest of approximately 33,157 deer was the highest it’s been since 2002.

Nathan Bieber, a deer biologist with the Maine Department of Inland Fisheries and Wildlife, says hunters are “a little bit ahead of last year’s clip at this point,” with roughly 2,000 more deer harvested over the same period.

Bieber says that the relative abundance of acorns this year might actually be benefitting deer hunters there, who are more accustomed to hunting in heavily forested areas.

“Maine’s landscape is maybe a little different from other parts of the Northeast,” he explains. “We really are dominated by forest and we don’t really have the agricultural component that a lot of those other states have.”

On the subject of weather, Bieber says that the slightly warmer and wetter conditions haven’t been as much of an issue in Maine. And he says that with snow in the forecast, he’s optimistic that hunters in the northern part of the state will start finding even more deer.

“[Hunters] may benefit if we get a little bit of snow,” he explains, “because a lot of our northern Maine deer hang out in and around towns. If they start that fall migration to their winter grounds earlier, during the hunting season, hunters can really take advantage of that.”

Adams agrees with Bieber on this point, and looking at the entire northeastern region, he thinks that “once it does get cold, we’re going to start seeing those harvests really ramp up.”

“I still think that if you look at many of the states that have already reported low harvest numbers,” Adams says, “I’ll bet we get to the end of December, and most of those states are going to be singing a different tune.”