Upside of a Youth Hunt: Remembering Why Hunting is Fun

The 9-year-old girl skipped through the hunting lodge … “I missed a turkey,” she announced to the group. “He was... 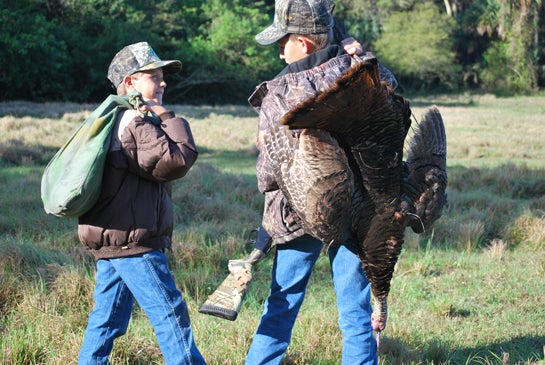 The 9-year-old girl skipped through the hunting lodge … “I missed a turkey,” she announced to the group. “He was a jake and we saw some big ones too, a whole bunch of them.”

I’ve never seen a kid happier (wouldn’t that put a smile on your camo-painted face?).

It was the first day of Florida’s special youth turkey hunt weekend and she and her dad were the last ones back at camp after their morning hunt. The other three kids and their mentors had seen plenty of action too, but nothing hung in the walk-in cooler. The adults were sitting around drinking coffee, laughing and telling stories of and fly downs and gobbles at 20 yards and tipped over decoys. The kids were already outside trying to drag a 10-pound catfish out of the pond. It was as happy a hunting camp as I have ever been in.

If this were opening day of the regular season, it would be a different story. An empty cooler on opening morning is not a good thing in this south Florida hunting camp. There would be plenty of long faces and talk of last spring’s wet weather affecting the hatch. There’d be griping about the need to plant more turkey food and too many predators and a whole bunch of too much of this and too little of that. In other words it would have been one damn sorry opening day.

But, there were no long faces on this opener. It seemed like the kids didn’t get the “No Turkey; No Happy” memo. And miracle of miracles: neither did the adults. The excitement was palpable and it had been that way all week as the adults got ready for the big weekend with the kids. Phone calls and e-mails went back and forth: “There’s three longbeards roosting at the head of Grand Marsh.” “You gotta take Cole behind the big food plot. I saw a strutter over there yesterday.” “Anybody need one of these cob strikers, I made a few extras for the kids.”

This weekend it was a one-for-all and all-for-one crowd. Most weekends you can’t pry roosted bird reports out of this bunch with a crowbar.

This was my first “official” youth hunt and truth-be-told my motives weren’t entirely unselfish. I started quite a ruckus last fall by taking some bowhunters in my home state of New York to task (in this blog) for opposing a special proposed youth deer hunting weekend. They were up in arms because the state was proposing to drop a youth hunt smack dab in the middle of their newly expanded bow season. Imagine that! I called them a bunch of self-centered obstructionists who put their own hunting pleasure in front of the kids (who just happened to be the future of hunting). They called me a jerk who didn’t understand bowhunters or bowhunting. We fought to a draw and pretty much agreed to disagree.

Point being, even though I have been taking kids hunting for years during the regular seasons, I have never participated in a”kids only” (with a mentor) hunt. I felt if I actually participated in a youth hunt, my position would be strengthened (should the topic come up again and force me to offer an opinion about self-centered hunters who hate kids. Well, maybe they don’t actually “hate” kids; they just love having the woods all to themselves).