Deer Hunting Tips: Rattling Research That Will Help You Tag Your Buck

New findings provide insight for rattling in your next buck 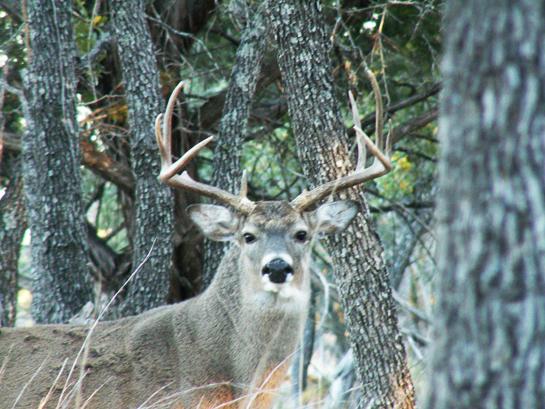 After rattling 171 times in southern Texas, researchers concluded that the most productive time to rattle is the peak of the rut, while the best to rattle up a mature buck is during the post-rut.

Over the next few weeks, deer hunters will hit the woods packing a set of antlers and some big expectations. They’ll climb into a stand, mimic a buck fight and wait for a monster to charge within bow or gun range. Most of the time, none will. After a few tries, many of these hunters will go home, throw the horns into the garage and decide that rattling doesn’t work outside of Texas.

Well, I beg to differ. If you whack the horns right, if you do it during the right phase of the rut and if you keep your confidence up, you can rattle in a buck or two. No, rattling is not a sure thing; it’s a tool that, when used at the right time, can bring a big buck in. So just when is the right time? A wildlife biologist decided to find out. Here’s what he learned.

THE TEST PROCEDURE
Mick Hellickson, chief wildlife biologist for the King Ranch in southern Texas, worked with several college interns to conduct three years of research on a large refuge in San Patricio County. The deer population in the study area was high, the buck-to-doe ratio was fairly balanced and the age structure of the bucks was very good. Plenty of middle-aged bucks (3 1/2 to 4 1/2 years old) and mature males (5 1/2 years and older) prowled around in search of does. They were the perfect candidates to rattle up.

Hellickson asked himself, “What type of rattling attracts the most bucks?” To find out, he developed four sequences. The “short and quiet” (SQ) and “short and loud” (SL) routines included three 10-minute segments (1 minute of rattling followed by 9 minutes of silence per segment). The “long and quiet” (LQ) and “long and loud” (LL) sequences included three 10-minute segments (3 minutes of horn cracking followed by 7 minutes of silence per segment). During the quiet sequences, the rattlers avoided loud antler clashes. For the loud routines, they whacked the horns as hard as they could and also broke branches and scraped the ground to further simulate a battle.

The researchers worked in two-man teams. A camouflaged observer climbed into one of the 30-foot towers scattered across the refuge. A rattler, also in camo, climbed into a clump of brush upwind and went to work. When a buck responded, the researchers took notes, videotaped the deer and estimated its age and Boone and Crockett Club score.

WHAT THEY LEARNED
Over the three-year study, researchers rattled 171 different times during the pre-rut, peak and post-rut phases in November and December. During this time they lured in 111 bucks. They had an overall response rate of 65 percent.

During the pre-rut, 18 bucks responded to 60 rattling sequences for a response rate of 30 percent. The silver lining in the pre-rut is that many of the bucks that responded at this time were mature animals.

The peak of the rut was Hellickson’s most productive time. During the wild days, 65 bucks responded to 60 rattling sequences. Often multiple 8- and 10-pointers charged or circled in.

For the last few years I’ve been telling anyone who would listen that the first weeks of the post-rut, when gnarly old bucks cruise for the last hot does, are prime for trophy hunting. As further confirmation, I point out that this phase is when Hellickson and his team rattled up the most mature bucks. Of the 29 bucks that responded to 51 post-rut rattling sequences, ten were 5 1/2 years and older, and another ten were 3 1/2 to 4 1/2. Don’t give up on rattling too soon.

I’ve always had the best luck rattling in the morning. So did the researchers. Sixty of the 111 bucks (54 percent) came in between 7:30 and 10:30 a.m. Cool days with 75 percent cloud cover and light winds were best.

RATTLING SETUPS
An astounding 67 of the 111 bucks (60 percent) that came to the horns were first spotted downwind of the tower stands. Interestingly, immature males were just as likely as older bucks to approach from downwind to try to sniff out the source of the rattling. Most of the bucks spotted upwind of a stand before a rattling session circled downwind as they approached the ruckus. The lesson is simple: Always set up to rattle where you can see downwind.

While the observers in the towers spotted all the bucks that responded, the rattlers on the ground failed to see 63 of the deer (57 percent). Think back to all those “dismal” days when you sat against a tree and banged the horns. I don’t think it’s a stretch to say that on some occasions bucks came in downwind, but you just couldn’t see them. Get some elevation—rattle in a tree stand or on a point overlooking a river bottom—and you’ll eyeball more bucks.

TURN UP THE VOLUME
“If you aren’t totally exhausted after a sequence, you probably didn’t rattle loudly enough,” says Hellickson. He and his crew rattled hard 85 times and attracted 81 bucks. Their 86 quiet sequences pulled in only 30 bucks. Crashing the horns, along with cracking sticks and beating the ground to mimic the mother of all buck fights, was nearly three times more effective than the passive approach.

The length of a rattling session didn’t matter much. Forty-nine bucks responded during the first 10-minute segment, 37 during the second and 25 during the third and final portion. “To see a majority of the bucks that respond to your rattling, stay put for at least thirty minutes,” advises Hellickson.

Rattlng in your woods as compared to the refuge where this study took place, the ground you hunt likely holds fewer mature bucks, and the buck-to-doe ratio and age structure of the males is probably not as good. Still, wherever you hunt, you can learn from Hellickson’s research. Climb into a tree stand on a cool, cloudy, windless morning during peak rut or post-rut, whack the horns like a wild man in short, explosive volleys till your hands go numb, and keep your eyes peeled downwind and your confidence up for at least 30 minutes. Oh yeah, and get your bow or gun ready, because Mr. Big might show up any minute. 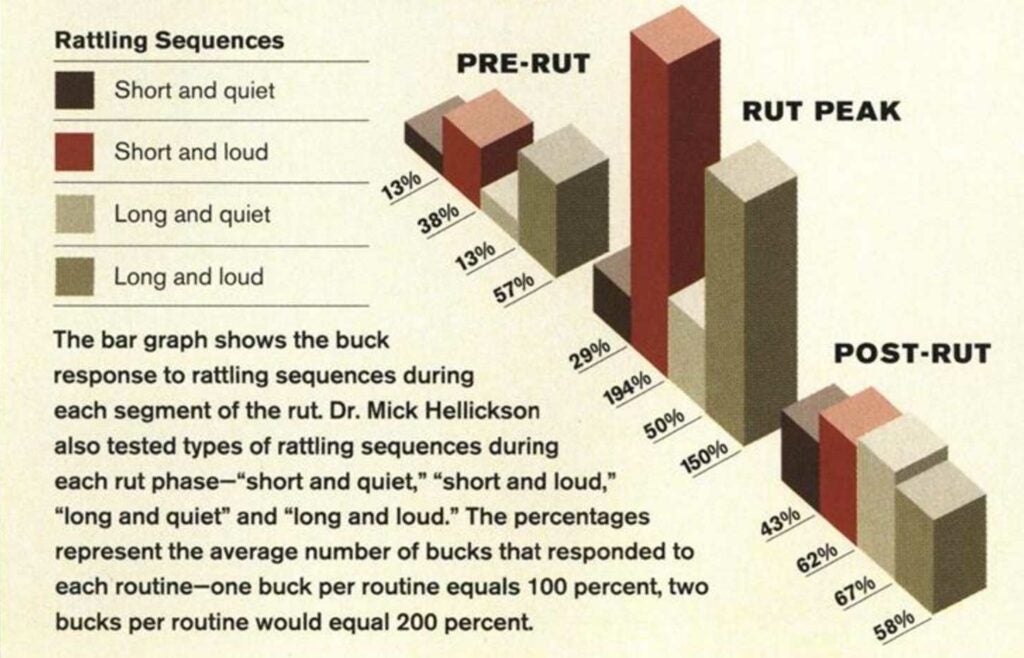 The bar graph shows the buck response to rattling sequences during each segment of the rut. Dr. Mick Hellickson also tested types of rattling sequences during each rut phase—”short and quiet,” “short and loud,” “long and quiet” and “long and loud.” The percentages represent the average number of bucks that responded to each routine—one buck per routine equals 100 percent, two bucks per routine would equal 200 percent.

Quick Tip “I’m sure imitation antlers will attract bucks, but I prefer to use the largest, freshest set of shed antlers I can find.” —Mick Hellickson, deer hunter and chief wildlife biologist at Texas’s King Ranch

Originally published in the September 2003 issue of Outdoor Life