Bo Cocannouer of Tuttle, Oklahoma shot this freaky 185-inch Oklahoma buck while bowhunting earlier this month. Cocannouer, a firefighter and... 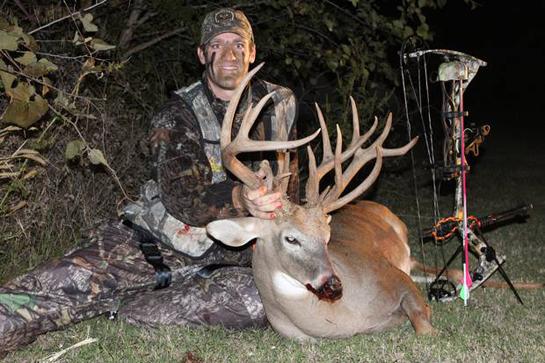 Cocannouer, a firefighter and prostaff member of a local show named Fired Up Outdoors, first spotted the buck on trail camera photos earlier in the fall. On Oct. 8, Cocannouer and his buddy Trent Wood headed out to the stand to hunt and shoot video.

Here’s how their hunt played out, according to NewsOK.com:

_”Sure enough, the big buck’s pattern was predictable. Cocannouer got a shot that day and hit the animal with an arrow from his compound bow. He telephoned a friend and then his father to tell them the news and wait for the buck to go lay down.

Cocannouer took a look through his binoculars and it was the same buck that he had just shot about 15 to 20 minutes earlier. The buck was literally licking its wound … The buck hung back for a few minutes but then walked by close enough to give Cocannouer another chance.”_

Cocannouer made good on his second shot and put the buck down.