Sometimes, whether you’re stuck in an early-fall lull before the rut kicks in or dealing with ghost bucks that seem... 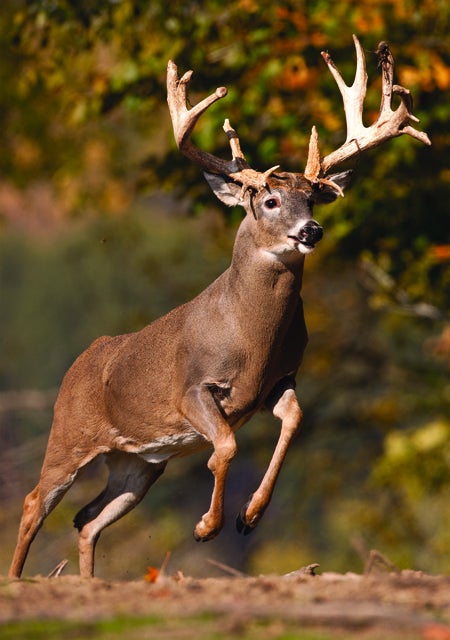 Sometimes, whether you’re stuck in an early-fall lull before the rut kicks in or dealing with ghost bucks that seem to move solely at night, the only way to get a shot at a giant is to push him to another hunter. Drives with a bow can work–and work well–but it takes a different approach from the typically loud and aggressive orange-army pushes more common to gun season. Try these two- and three-man deer drives the next time that big boy won’t cooperate by walking by of his own volition.

Small Cover
Whether it’s a small stand of timber or an island of brushy cutover surrounded by fields, driving small patches of cover can yield big results when you’re working to jump up a heavy-racked recluse. The smaller the patch, the better for just one or two hunters, as it is easier to narrow down where an escaping buck is apt to flee. Patches no bigger than an acre or two are perfect, but pushes in stands as big as 10 acres are still workable.

Position the first stander downwind of the cover–at a point, slough, ditch, or fence line–at least 20 to 30 minutes before the start of the drive. Silence is key when getting in position. If a second stander is available, locate a secondary escape route with similar features and place him there.

The driver should remain away from the area until he’s ready to push it, lest his scent drift into the cover and blow a deer out before the hunt has even begun. He should zigzag back and forth, keeping more to the upwind side away from the standers. This helps prevent deer from bolting into unoccupied gaps. The driver should wear orange. Block escape routes with outerwear.

Brush-Choked Hillside
Narrow timbered hillsides bordered by roads or fields that have had a chance to grow up for a few years provide great skinny cover for whitetails. I like this hunt in midmorning when thermals are still rising or the wind is pushing scent uphill. The first stander should post on the uphill slant both to get the high ground and to be in position to intercept a buck’s natural tendency to flee in this direction. The driver should start low and zigzag only halfway up the face of the incline before dropping back low. Keep most of the push low to prevent deer from bolting through the unprotected side.

There are two optional spots where a second stander could sit: covering the flank up high and straight down from the first stander, or down low near the end of the cover to put the pinch on anything that tries to slip out this way. To help scent-block an untended escape route, hang a hunting coat on a branch to force deer in the opposite direction. Again, be careful not to push deer before positioning standers.

Wooded Point
This hunt will play on the whitetail’s natural tendency to keep to cover and head for the big woods as it escapes. This time the driver walks into the wind. The first stander should set up in a tree where the creek and woods’ edge form a natural funnel, while an optional second stander covers the other side of where the point edge merges with the larger tract of forest. The standers are in an ideal setup on this hunt, as they have the wind and the hunting pressure completely to their advantage.

The driver may want to crunch brush a little more loudly, as the wind won’t push scent through to where the deer are hiding. This will hopefully send deer easing out instead of sitting tight until the driver is upon them and then exploding from cover at the last second. To stop a running buck in its tracks for a quick shot, grunt loudly, whistle, or even try a snort-wheeze. Be ready to shoot, because he’ll only give you a moment’s pause before running out of sight. It will take a veteran bowhunting eye to know when to shoot and when to pass.