Each fall, my son Neil and I head for a world-class piece of property we affectionately refer to as The... 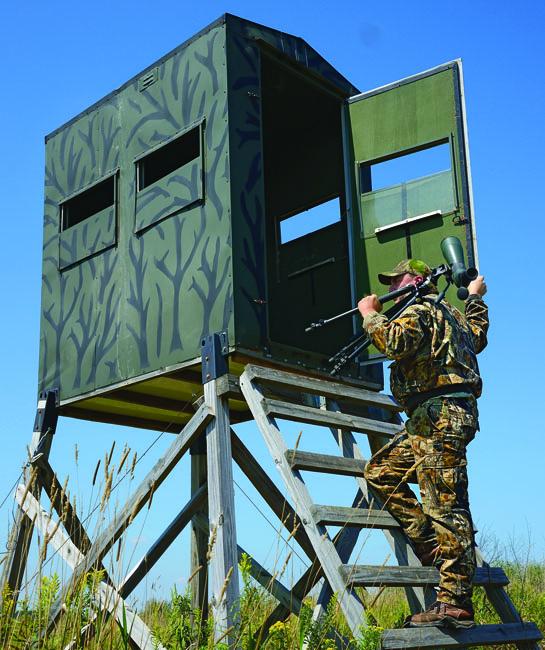 Each fall, my son Neil and I head for a world-class piece of property we affectionately refer to as The Laboratory, which has increased our understanding of the rut dramatically. This elevated box blind affords us the opportunity to keep track of deer rutting behavior on more than 600 acres at once. It’s equivalent to watching several properties at the same time, and we can often see a dozen or more bucks simultaneously in a variety of habitats.

This stand overlooks acre upon acre of CRP fields, a dozen or so food plots, a few crop fields, and several woodlots. The CRP fields are made up of goldenrod, brushy areas, and hedgerows. The timber is mostly hardwoods with some stands of conifers mixed in. The crops are usually corn and beans, and the food plots vary by the year.

At any given time, at least a half dozen mature bucks are camped out on the place. It is fascinating to note how various age structures interact with each other and to actually recognize the different personalities of the deer–especially during the rut. Some deer are homebodies, while others are travelers. Some fight and some avoid confrontation. Some bucks seem to have no trouble landing the does and others can’t seem to catch a break. We can watch breeding parties or bucks locked down with individual does. We can watch a buck breed a doe one day and lie up in the weeds all the next. Bottom line: On any given day during the rut, we can observe a dozen or more bucks exhibiting all kinds of behavior. Following are some of the most fascinating behaviors we have seen in recent Novembers.

11/9/10: Neil spied Wide 9 aggressively chasing does. The next day, the buck was taking it easy. He hit a food plot 600 yards away, flushed a few does, and slowly headed Neil’s way. Neil bailed out of the blind, ran 300 yards in a ditch, set up, and killed the buck point-blank with his bow. There’s no way Neil would have intercepted this buck if he was still chasing does.
**
11/15/10:** A dominant buck repeatedly pushed a doe to her feet and bred her four times in the course of one day while several satellite bucks watched.

A buck laid up with a doe in a half-acre CRP field for two consecutive days. Six different bucks moved in on the action but were driven off by the dominant buck.

11/9/11: We watched a doe gallop at least 800 yards across a thick CRP field with nothing in pursuit. She’d clearly had enough of one location and was heading for another. Three hours later, we observed a young buck working the same area. He struck the doe’s track and worked it like a beagle on a rabbit.

11/12/11: We entered the blind before light and watched bucks breeding and chasing does all day. A half hour before dark, a mature buck stood up in the goldenrod 60 yards in front of us, where he had been bedded all day. While all the other deer were breeding, he had slept virtually the entire day away.

We watched a buck work up a draw, scent a doe, move in on her, and breed her directly. He dismounted, and then walked away over the horizon. Although most bucks stay with receptive does for a few days, this buck clearly displayed different behavior.