When Virginia hunter Scotty Dolan tagged this bizarre bruiser on Nov. 16, he wasn’t quite sure what he had killed.... 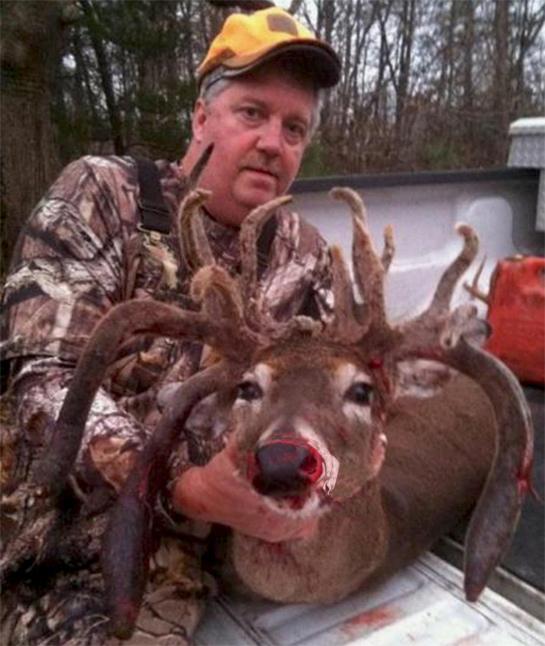 When Virginia hunter Scotty Dolan tagged this bizarre bruiser on Nov. 16, he wasn’t quite sure what he had killed. Closer inspection of the downed deer revealed a velvet rack with three bulbous droptines and 20 scoreable points. At first Dolan’s hunting buddies thought his field photos were a joke pulled from the internet. But when they finally met up with him, they couldn’t believe what they saw.

That morning Dolan, 51, joined his hunting club buddies and their dogs to hunt a 400-acre property in Goochland County, Va. When the group stopped for a long lunch, Dolan grew restless and decided to switch to solo still hunting. He set off in the opposite direction his friends were headed and chose a ladder stand near a well-traveled hunter’s road. But the woods were calm and Dolan didn’t feel right about his setup, and he relocated just an hour later.

This time he chose a stand near a bedding area. He was sitting in a cutover with dense cover in front of him and a grove of mature oaks behind him. Another hour passed and Dolan began to daydream of giant bucks and hunting magazine fame. “I was just thinking crazy stuff,” Dolan said. But 10 minutes later something far crazier than he had imagined walked out of the woods.

A deer stepped out of the trees to Dolan’s left at 60 yards, its head to the ground as it browsed toward him between the cover and the oaks. “When I looked at it, I had to take a double-take,” Dolan said. “I said, ‘Am I seeing what I really think I’m seeing? Man that thing looks kind of weird.'” Dolan raised his shotgun and waited for the buck to lift its head. When it finally looked up at 35 yards, Dolan aimed for the chest and squeezed off a round of buckshot. The bruiser dropped in its tracks.

Dolan sat in his stand, “shaking like a leaf” and second-guessing his target. “Man, I hope I shot what I thought I shot,” Dolan said. He chambered a fresh shell and kept his eyes trained on the deer. He waited a few long minutes but couldn’t take it. Dolan descended the ladder with his back to the rungs, keeping the buck in sight. “I couldn’t stand it,” Dolan said. “I mean I ain’t going to sit still very long with something like that.”

Still shaking, Dolan walked toward the buck. “‘It was laying there and I looked at it and I said, ‘Man what in the world is this thing?'” He decided to contact his buddies for backup and a four-wheeler. He snapped a couple photos with his phone and told them he’d killed a monster. Instead of the expected hearty congratulations, Dolan was met with genuine disbelief. “They all started calling me a damn liar,” Dolan said with a laugh. The photo was so strange they guessed he had downloaded it from the internet just to mess with them.

Dolan admits he often plays the joker, but this time he wasn’t kidding. One of his friends thought Dolan seemed too excited for a prank and they eventually met him in the woods. When they saw the freak buck in person, they lost it. By the time Dolan hit the sack that night, pictures of his buck had circulated to friends and family around the country.

At nearly 200 pounds and at least 4 1/2 years old, Dolan said the buck was unusually large for the area. But those are the buck’s least surprising features. The tentacle-like antlers are still in partial velvet, and the three huge drop tines range from 16 to 18 inches. Dolan hasn’t scored the rack yet, but his taxidermist identified 20 scoreable points.

Another unusual characteristic may solve the mystery behind the bruiser’s freaky appearance: The buck was missing its reproductive organs. Taxidermist Todd Rapalee suspects the buck lost them in a fight this year. Such a severe hormonal disruption during normal antler growth could explain the velvet and softer tines. Rapalee said the buck’s antlers resembled a growth stage typically seen in early August. “We’ve been in business for 43 years, and I would say we see a deer like this approximately once every five years,” Rapalee said. “Definitely not a common deer to see.”

Dolan isn’t troubled by the buck’s unusual rack, however, and enjoyed both his hunt and its aftermath. “It was real exciting with a lot of people kind of looking at it and saying it’s the craziest thing they ever saw,” Dolan said. “It’s been a lot of fun, that’s all I can say.”