Whitetail Deer: Looks Like We Dodged the EHD Bullet

In early August we posted an epizootic hemorrhagic disease (EHD) alert asking readers to keep their eyes peeled for dead... 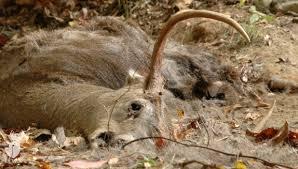 In early August we posted an epizootic hemorrhagic disease (EHD) alert asking readers to keep their eyes peeled for dead or dying deer which may be victims of EHD. The disease has led to significant die-offs in the past few years with 2012 being one of the worst. With few reports surfacing, and the disease season about to end, it looks as though we have dodged the EHD bullet for 2013.

Deer experts at the Quality Deer Management Association (QDMA), concur. The organization has members across the country who keep tabs on all things deer. So far, they have reported very few suspected die offs due to EHD. According to Dr. David Stallknecht, of The University of Georgia’s Southeastern Cooperative Wildlife Disease Study (SCWDS), this year’s outbreaks don’t even come close to those seen last year. For the most part, the EHD season is over and it’s safe to assume deer have had a good year in most parts of the country, especially in the Northeast. SCWDS is the country’s leading resource for identifying EHD outbreaks in whitetails.

With the northern U.S. frost season just ahead, the threat of serious EHD outbreaks in the North is just about over for the year. Northern outbreaks have been quite serious in recent years due to the fact that deer in northern locations do not seem to demonstrate the same resistance to the disease as southern deer. Michigan did report a breakout (25-50 deer) on Sept. 9, but characterized it as “in line with outbreaks that have occurred annually for the last decade ….and appears to be localized.” Outbreaks like this are fairly routine and populations can easily recover. Last year, Michigan was hit hard by EHD, with outbreaks numbering in the thousands and extending across large geographic regions.

The often fatal disease is transmitted by tiny biting midges which breed in muddy areas near ponds and other watering areas. Dry weather makes for large mud flats more mud around the edges of water holes, lakes and ponds. Mud breeds midges. Deer carcasses infected by the disease are often found near watering sites in late summer to early fall. The first frosts of the year eliminate the midges and infection ceases from that time on. Wet weather in most of the north is cited most often for the decline in EHD outbreaks this year.

Many experts point to 2012 drought conditions over many northern locales for the severe outbreaks experienced last year. This year’s wet weather was plenty wet led to fewer breeding opportunities (mud flats) for the disease carrying midges. Others believe EHD outbreaks to be cyclical with the cycle peaking in 2012. Whatever the reason we are glad to have dodged the EHD bullet this year. For more information on how you might be able combat EHD on your property visit www.qdma.com.