How to Double-Team a Gobbler by Calling with a Buddy

When pressured turkeys go quiet, shake things up by starting a conversation with your hunting partner 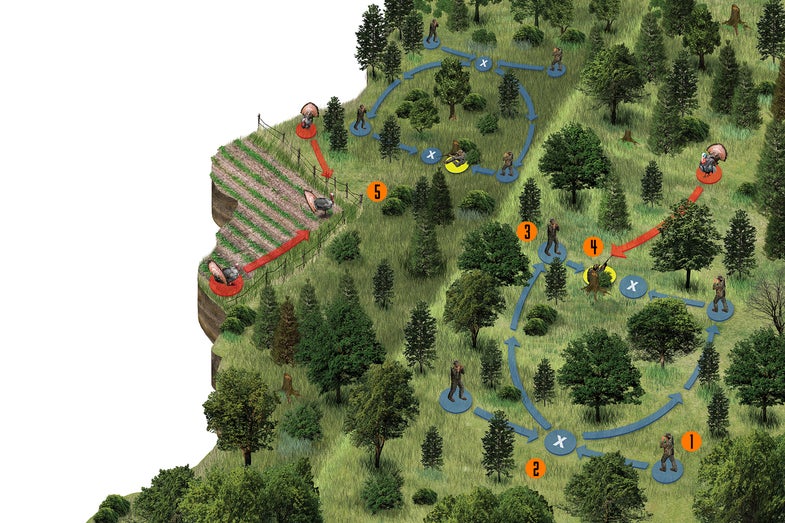 Woodhaven Custom Call pro staffers Kindell and Greg Keeton describe their hunting tactic as a “drag line.” It’s a novel way to get clammed-up gobblers to respond to calls by pretending to be a couple of hot hens moving across the landscape.

“You start with basic yelping, and as you get close to each other, you become more aggressive, with excited hen yelping and cutting,” explains son Greg.

Kindell adds, “Then when you get together, you start with more content calls, such as soft yelping, clucking, and purring.”

If the hunters don’t get a response within a few minutes of meeting up, they separate up to 150 yards again (3) and start the process all over.

The conversation between the two hunters creates a level of realism that a single hunter cannot achieve. Additionally, the movement and convergence of two “hens” creates an urgency that often attracts tough gobblers, especially pressured public-land toms that are often called away from hunters by possessive hens.

The Keetons say the tactic works best along a ridgeline. They will often drag long ridges for an hour or more before they get a response. Sometimes that means they drag the timber five or six times in the course of a hunt.

“If while moving along you strike a hot gobbler and there’s time, look for a path without obstructions like a creek, steep terrain, fences, or thickets,” says Kindell. Set up (4) along that path, but while the two hunters are apart, each needs to make sure he knows where the other is located and be extra cautious about lines of fire.

You can also drag the edges of fields. The key is to stay deep enough in cover along the edges so that you remain hidden. If you get a gobbler to respond and you can get to the corner of the field, you might be able to set a decoy (5) and wait for him to come to you. Greg points out that realistic decoys are very important.

One last tip from Kindell—who placed in the top five of the NWTF’s Grand Nationals Calling Championships four different times—is, don’t call if you don’t have to. In other words, once you have dragged the gobbler and he is coming, let him come.

“The only thing you can do when a gobbler is already on his way is mess it up,” he says.

READ THIS NEXT: Identify Favorite Roosts Using These 4 Topographic Setups