Figuratively speaking, this rainbow, did indeed lead to a pot of gold. Perhaps not in monetary terms, but the gilded... 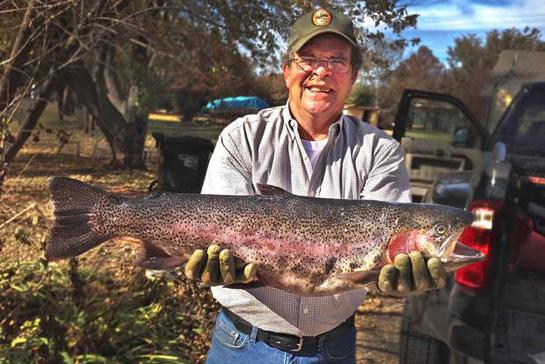 Figuratively speaking, this rainbow, did indeed lead to a pot of gold. Perhaps not in monetary terms, but the gilded memory of catching a state-record fish is even better than gold.This was the tale for Mark Reed whose 10-pound, 10.56-ounce rainbow trout broke an Oklahoma state record set nearly a half century ago.

In late November, the 61-year-old angler from Bridge Creek, Ok., caught the big trout on a copper/red head Super Duper in Roman Nose State Park’s Lake Watonga. According to the Oklahoma Department of Wildlife and Conservation, his catch taped out at 27 ¾ inches long with a 17 ½-inch girth.

The Oklahoman quoted Reed: “Never in my wildest dreams I thought I would catch a fish that big.”

Reed’s record catch, which was recently certified by state wildlife officials, eclipsed the 10-pound, 4-ounce mark set by Billy Payne in 1966. NewsOK notes that large rainbow trout are uncommon in Lake Watonga, as summer temperatures and large bass keep the stocked trout from reaching such dimensions.

Reed likely caught a brooder – a large fish used for hatchery production and released after its usefulness along with the smaller stocked trout.

Reed, who has fished Watonga since 1999 plans to have his trophy mounted. He’ll loan the mount to the store at Roman Nose State Park so others can see his golden catch.