It was go big or go home for Peter Buban and he did both. During a night of surf fishing... 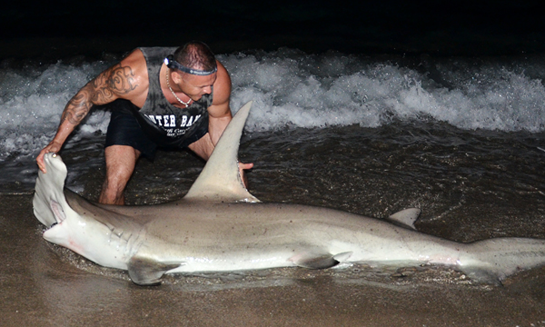 It was go big or go home for Peter Buban and he did both. During a night of surf fishing in Florida’s Palm Beach County, Buban caught a 13-foot, 9-inch hammerhead shark that went about 1,000 pounds and took home a big prize – first place in the annual Blacktip Challenge shark fishing tournament.

“I basically beat everybody by two and a half or three feet,” Buban told WFLX (Fox 29). “It’s very rare that somebody is going to beat you with this kind of fish.”

It took Buban about an hour to beach the giant hammerhead. His catch is the largest in Blacktip Challenge history.

Buban stressed shark appreciation through conservation. He used a circle hook, which lessened the likelihood of deep-hooking and facilitated a safe release. After unhooking his fish and taking its measurements, Buban released it back into the ocean and even followed it 200 yards offshore in his kayak to make sure it swam off with no more than a bruised ego.