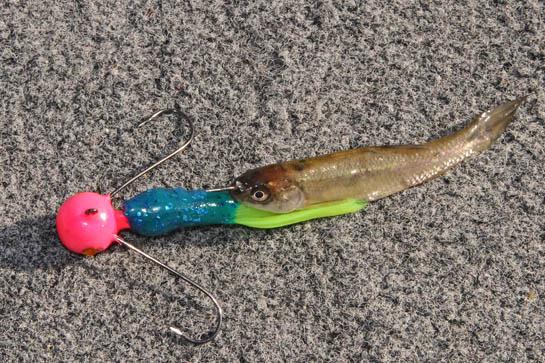 Whitey Outlaw, a crappie tournament pro from South Carolina, views aggressive crappies as a two-edged sword – great opportunity with lots of slashing strikes, but also plenty of heartache when the fish hit the bait so hard they miss the hook.

This happens a lot with his preferred tactic of tight-lining. Also called “pushing,” jigs and/or minnows are held vertically on weighted lines and slowly presented to crappie-friendly cover. A fired-up fish bull rushes the bait and the impact knocks the hook away from its mouth.

Well, he finally got a belly full of these frustrating occurrences and decided it was time to give his jig head a little extra grabbing power.

The result: The Outlaw Max Game Changer. Built by the high-end jig makers at Rockport Rattler, the design takes a standard round head jig and adds a light wire hook on either side of the main hook. Rig a tube, minnow (maybe both?) on that center hook and the outside arms extend the reach, somewhat like a swimbait stinger hook.

“This jig will hook that crappie no matter what angle he hits it from,” Outlaw said.

He said the only downside of this new jig is the occasional challenge of removing it from a crappie’s mouth. That’s no different than the task of removing the multiple treble hooks of a jerkbait or crankbait – the welcome tradeoff of solid hook-ups.

The Game Changer might look like a jig with training wheels, but when you consider the versatility of bending those outer hooks into multiple positions, this definitely looks like an improved mousetrap.