How to Pick the Right Turkey Dog Puppy

Turkey dogs are used during fall turkey season to find and flush flocks. Separated from their group, singles and small... 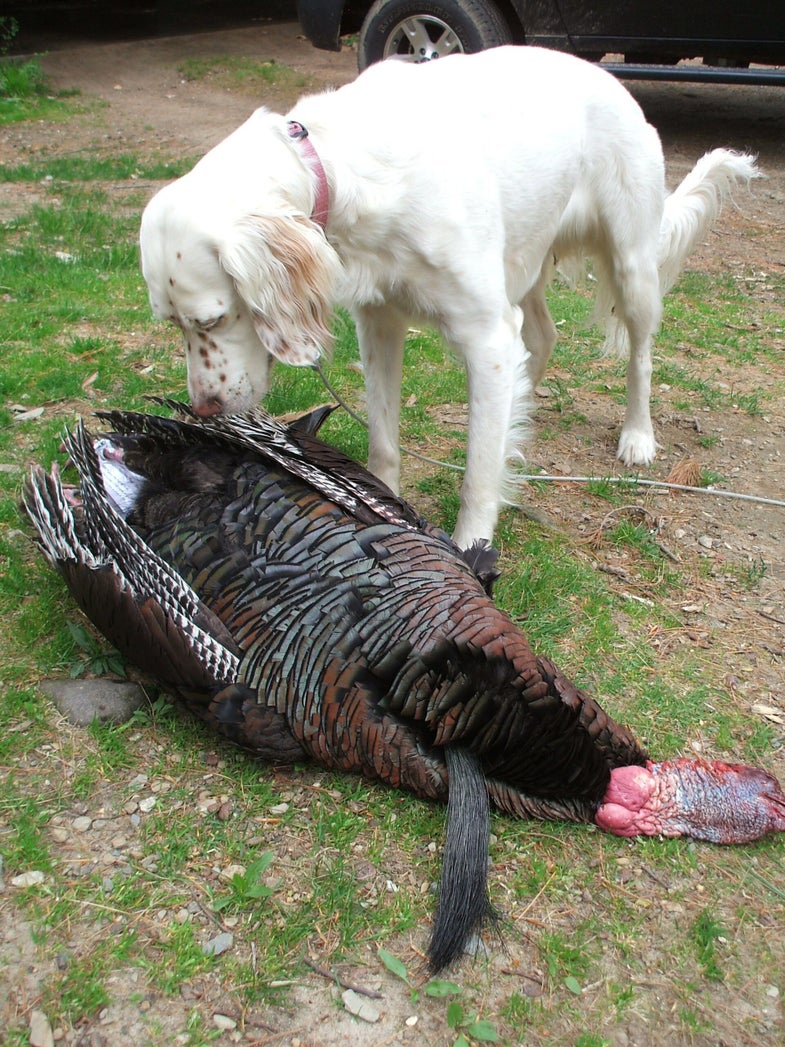 Turkey dogs are used during fall turkey season to find and flush flocks. Separated from their group, singles and small numbers of birds are then called back to the blind. It takes a special dog to adeptly perform this task, and here are five things you need to consider when picking out your next pup:

1) Breeding: You want a dog from a good line of options. John Byrne and son J.T. of Lowry of Virginia have a line of turkey dogs — a pointer/setter/Plott hound cross. Other turkey doggers employ Labrador retrievers, Boykin spaniels and English pointers (in the Virginias some turkey doggers call the latter “brown-headed dogs”; mixed blood is sometimes in these canines too).

I have hunted my English setters to find and flush fall turkey flocks over the years with success. Two of them were sired by a National Grouse Field Trial Champion. This field trialing component is an important factor. Their breed is known for running big; a bonus in a turkey dog. Yes, setters are a “pointing breed” but I train them in a different way than a purist upland bird hunter might — I don’t teach “steady to wing (or run).” This way I can release a setter that first points turkey flocks with a verbal command. Some of mine have been fairly staunch as pointing goes; some (the renegades) simply charge in — desirable with turkey dogging, but not for other upland birds. What you want is a breeder of proven bird/turkey dogs to have a chance at a good pup. What you do with that breeding is called training.

2) Birdiness: Good breeding or not, you want a dog that’s birdy. If possible, have the breeder show you the parents working cover. Check out the litter of pups and watch how they move around. Take each of them out for a short walk through a field or the nearby woods. The right little dog will show birdy characteristics early on. Do they chase butterflies (we’re talking about a pup not a grown dog), sniff at bugs, run after nearby songbirds, and watch birds in the sky as they move? Are they curious? Driven? If so, you may have found a candidate that can be molded into a turkey dog. We could also generalize here and simply call this “prey drive.”

3) Biddability: You want a dog that will check back, work cover, and come when called. Each puppy is different, but after looking at the litter’s sire and dam work, have the breeder call them in. Do they respond well to the whistle, hand signals and verbal commands? Take a look at the pups again. When you whistle, move your hands and talk, do they look up, or ignore you? The ones that focus on you with keen snapping eyes are the pups that might prove most biddable.

4) Range: You want a dog that works cover far enough out to find turkey flocks but close enough that you’re hunting together. Field trial bird dogs, particularly setters and pointers, run big. Again, my best turkey dogs have cast far and checked back with regularity. You want a dog that is bold enough to seek out new cover but also bonded closely enough with you to check back. Remember, the idea is to have a hunting partner and not have to hunt for your dog. Still, a big runner to me is better than a typical upland bird dog that hunts too close. Turkey flocks tend to range farther out and you need a dog to get on them and scatter the group.

5) Temperament: You want a dog that will settle in the blind for the call back. Turkey dogs need to run big, scent turkey flocks, and flush them in all directions for the best results. Then, they need to have the temperament to calm down in the blind as you wait for the birds to return. This is the trickiest challenge of turkey dogging: run hard; relax. Training assists in this area, of course. When you check out the pups, turn them on their backs in your arms. Do they squirm and resist unreasonably? Do they settle after a bit and calmly lie there? The latter pup might be your pick, especially if they range well, seek birds and come from a solid breeder.

Turkey dogs are made over a lifetime of hunting seasons. It seems just when you get it about right, they’re gone, leaving great memories. But follow these suggestions to at least get you in the right direction.