If I would have shot more clays, I could have had a limit of pheasants yesterday. I should have had... 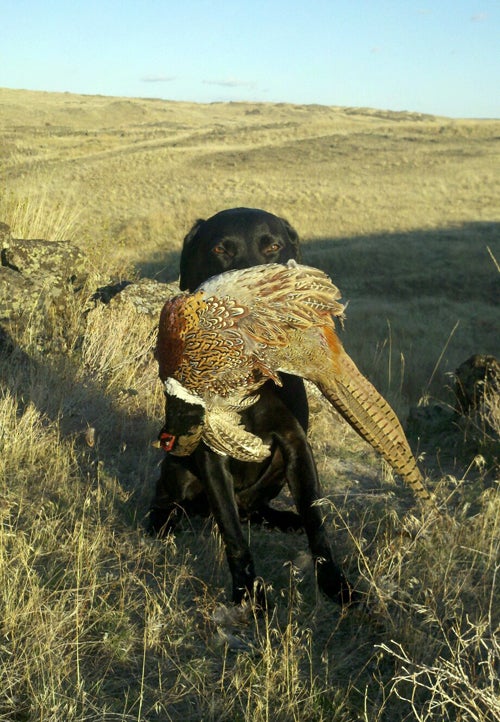 There are all sorts of excuses one can come up with for missed opportunities, whether that’s a shot, an approach, a surprise jump-shooting scenario or dog work. In reality it boils down to preparedness, practice, training and sometimes just dumb luck.

While trudging up and down coulees and busting the thick brush found lining basalt outcroppings and a creek channel for six hours, Kona and I encountered several wild pheasants along with the aforementioned mallards, teal and huns.

Missed opportunities were plenty, with my shooting to blame for most of them (lack of practice). However, surprise (teal screaming around a blind creek corner and mallards suddenly rising at the edge of choke range) and dumb luck played a role, too. More than once a hen burst from the cover and with my and Kona’s attention initially on her–roosters busted out further down–each seemingly alerting the next until nearby cover was void of anything with feathers.

Missed opportunities, however, are better than no opportunities at all. That was basically my response to two guys that came walking out empty handed from the public property we were heading into.

Stopping to ask how they and the two drahthaars at their side fared. They responded that the birds were easily spooked–nearly impossible to get close enough to shoot. Only once were they in position to shoot, but the bird was a hen. They had supposedly hiked for miles, having been there for nearly 5 hours and never pulled the trigger.

“Well, it beats sitting in the office,” I quipped, summarizing the old adage about a bad day hunting or fishing beats a good day at work.

One guy made a face as if to say he wasn’t sure that was so. I was unsure of these guys at that point until he followed up with: “It’s fun to watch the dogs work anyway.”

That comment somewhat atoned for the perceived misstep of placing any form of work above spending time chasing wild birds with a dog.

With the warning in mind, Kona and I set out to see what we could do. Once we figured out where the birds preferred to be, which wasn’t in the thickest stuff but rather along the edges of it or in isolated thorny bushes, we encountered mostly singles but did manage to bump up a few pairs, as well as a larger group or two. The larger groups got up a bit further than I would have liked, but the initial flushes were fairly nice. They seemed to be holding well for us.

While I missed three birds, one that “shoulda” legitimately been drilled with number 5 steel shot, that would have made our daily limit (not to mention the mallards, teal and huns that surprised us – “us” being me) we still had a good, albeit long, hard hunt.

And you better believe Kona and I will be back out there in a day or two to do just that.