The Perfect Cartridge for Pelts

If you simply want to kill a furbearer, then shoot a large load. But if you want to protect and preserve the pelt, consider these three options 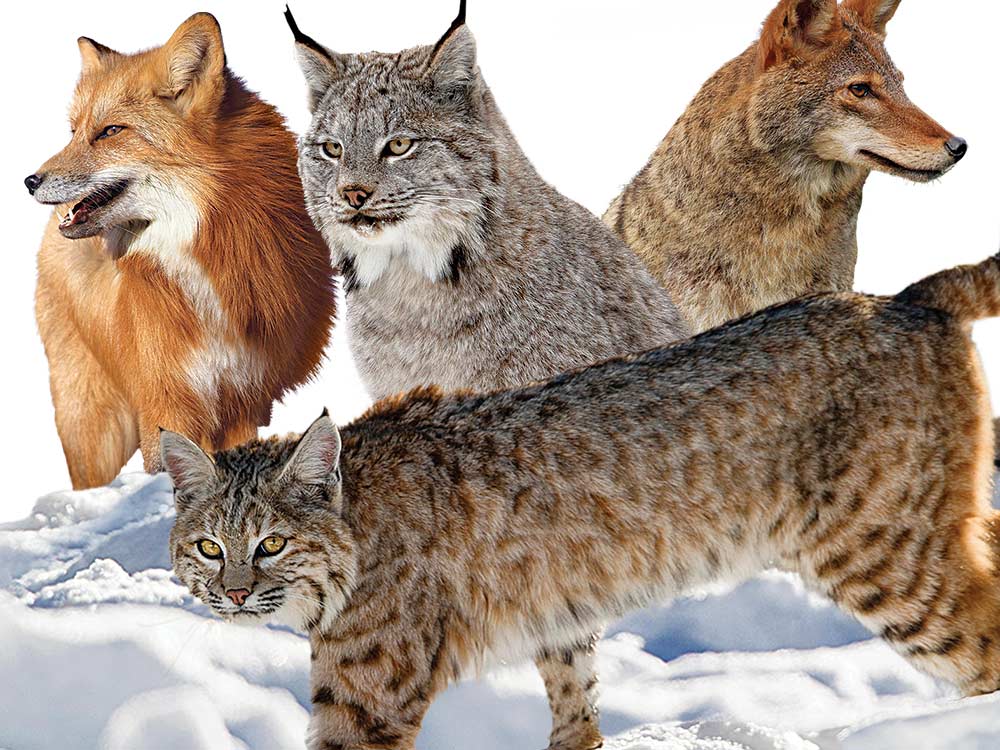 The goal of any fur-taking cartridge is simple. We want a round that will instantly incapacitate the animal we shoot with it while doing little or no damage to the pelt. On top of that, it should do that every time, on every animal. The reality isn’t nearly as black and white as we would like, but if you consider a few factors, you’ll be able to select the rifle and cartridge combo best suited to your needs.

If your interest is purely predator management and you don’t care about the quality of the fur you end up with, get yourself a .220 Swift and be done with it. Otherwise, the first thing to consider is which species you will be hunting.

As far as cartridges are concerned, commonly hunted furbearers fall into two categories: coyotes and everything smaller than coyotes, such as foxes, bobcats, and lynx.

These present a challenge in cartridge and bullet selection because they are tough to put down for their size but have extremely fragile skin and bone structure, making it easy to cause catastrophic pelt damage. Anything that would be considered an adequate coyote rifle, such as a .223, will usually damage fox or cat hides badly. On the other end, the .22 LR, .22 Win. Mag., and .17 HMR do very little hide damage but lack the oomph you need to knock them down consistently. The sweet spot for foxes and cats seems to be in the .17 Win. Super Mag., .17 Hornet, and .22 Hornet, with the .17 Hornet being top dog in my experience.

For fragile-skinned animals like bobcats, lynx, and foxes, the .17 Hornet seems to hit an almost ideal balance of power and fur preservation. On quartering or lengthwise shots, bullets rarely exit, and on broadside shots, the exit wound is almost always between the size of a nickel and a quarter, which is easily stitchable. Go-to bullets are the 20-grain Nosler Varmageddon, 25-grain Berger FB Varmint, or, my favorite, the 20-grain Hornady V-Max. I have killed probably two dozen coyotes with it and consider it to be an adequate round for them as well.

For the majority of predator hunters, coyotes are the focus. Though they have hides that aren’t that much more durable than a fox’s or a cat’s, their body size and toughness require significantly more power to put them down on the spot. The coyote cartridge spectrum is much more diverse than that for the smaller furbearers, and attention to bullet type and construction is critical. The classic rapid-expanding varmint style of bullet is the typical choice, and they are fantastic, but only to a point. The goal of these bullets is to give maximum transfer of energy into the animal and not exit.

There comes a threshold, however, where the animal can’t “contain” that force, and that’s when hides get damaged. It has been my experience that some of the most ideal cartridges are in the .17 Rem. to .204 Ruger range, rather than larger .22 caliber cartridges. They have the blistering speed and energy you want but use projectiles small enough to typically minimize hide damage. In this range, try to stick with bullets in the 25- to 40-grain range. In .204, bullets like the 26-grain Barnes Varmint Grenade, the Nosler 32-grain Ballistic Tip Varmint, and the Hornady V-Max are all great options.

The .223 is, of course, a very popular and good option. I have killed more coyotes with a .223 than anything else, but I have always found it to be right on the upper edge of what I want in regard to hide damage. Of all the bullets I have tried in it, the least damaging yet still effective bullet is the 52-grain Speer hollowpoint, which, despite being cheap and looking like a flying ashtray, has always shot very well for me.

Read Next: 8 New Pieces of the Best Predator Hunting Gear

Although deadly, the .22/250 Rem. I consider to be too much gun if one really cares about hide damage on coyotes. One option with larger cartridges is to use minimally expanding bullets. You will usually get pass-throughs, and they often won’t damage the hide nearly as much as rapidly expanding bullets. However, you will periodically get catastrophic damage if you strike large bones.

This hard-hitting bullet will drop coyotes with authority and is sure to exit. Pelt damage should be minimal unless the bullet strikes heavy bones.

What this bullet lacks in weight it makes up for in blistering speed: 3,870 fps at the muzzle. It is an ideal all-around choice for furbearers.

This potent little rimfire has a 3,000 fps muzzle velocity and is good for smaller-size predators and varmints out to 200 yards. After that, it loses gas—and killing power.
Tyler Freel