Minnesotan Shawn O’Connor climbed into his tree stand on September 9 hoping to get a bear, any bear really. He... 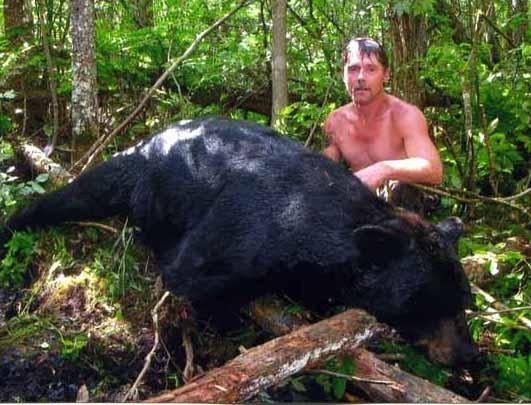 Minnesotan Shawn O’Connor climbed into his tree stand on September 9 hoping to get a bear, any bear really.

He didn’t really consider the possibility of taking a state record black bear.

“I didn’t even know what the state record was,” O’Connor told Rob Passons of Aitkin Age. “I never wait for a big one. I hunt for the meat, so I usually take the first one that shows up.”

The first one that showed up was huge.

O’Connor actually saw the black bear prior to taking it when he and his daughter scared the it off bait on September 7 while en route to their tree stand in the woods near Mille Lacs Lake. Mr. O’Connor, a retired bear guide, estimated the animal’s weight at between 400 and 450 pounds based on what he saw and the footprints it left behind.

“I was hoping he would come back,” O’Connor said.

It did on September 9.

O’Connor sat through three hours of stifling heat and swarms of insects before he spotted the bear shortly before sundown. O’Connor said he was checking the time on his phone when the bear appeared. “When I looked back up I saw his head sticking out of the brush by the bait,” he said. “It was windy, and I never even heard him coming.”

O’Connor waited until the bear presented a shot then dropped the animal.
The bear weighed 642 pounds, 12 pounds heavier than the current state record. The black bear’s hide alone weighed more than 170 pounds. “I knew it was big, but I didn’t know it was that big,” O’Connor said before adding “It doesn’t really matter a whole lot what it weighs as far as the state record goes. But it matters to me, I guess.”

O’Connor, of course, is referring to Boone & Crocket records which are based on skull measurements. Still, O’Connor isn’t worried. “This bear had a big old melon on it,” he said. “A lot bigger than that 611-pounder.”

Despite trying to keep the trophy a secret at first, O’Connor says he has been the focus of much attention since news of his take hit the street.
And the Internet.