Something odd is going on over at Nauset Beach near Cape Cod. Last week a 14-foot great white was spotted... 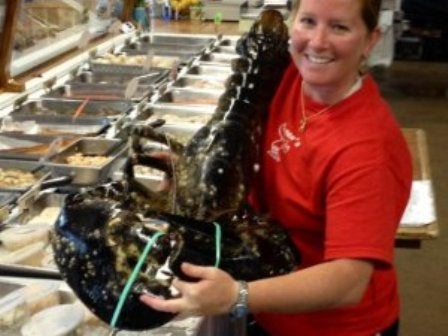 Something odd is going on over at Nauset Beach near Cape Cod. Last week a 14-foot great white was spotted cruising the shallows after kayakers. This week the depths brought forth a 21-pound lobster. So just how large is a 21-pound ocean bug. Elise Costa, manager of Capt’n Elmers restaurant where the lobster is being held explained it to WBZ this way, “I had its tail on my shoulder and I had each claw in one of my hands, and it was as long as my arms and as big as my torso. It’s giant.”

Costa went on to detail just how much meat a beast such as that could produce. “Usually, for every four and a half pounds of live lobster, once you cook it and clean it, you get one pound of meat. So 21 divided by four and a half, that would give you about five pounds of meat,” said Costa.

You’ll need a lot of butter.

Although a 27-pound lobster was caught off the coast of Maine in February, such large crustaceans are becoming a rarity as more and more lobster fishermen are being required to place max gauges in their traps. These prevent larger lobsters from entering the trap. Max gauges aren’t required in the waters of Cape Cod.