A Washington bowhunter went through 18 lives with one arrow on Monday when he bagged two mountain lions at the... 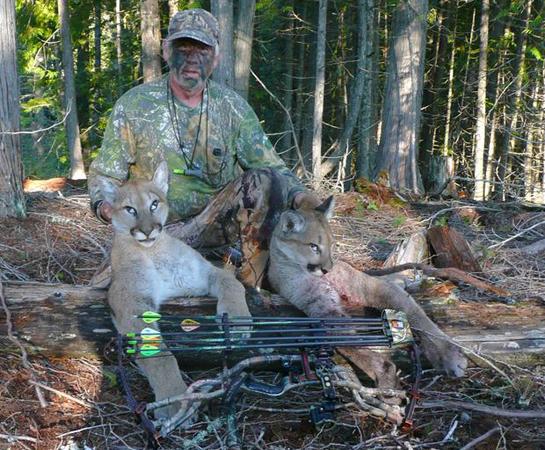 A Washington bowhunter went through 18 lives with one arrow on Monday when he bagged two mountain lions at the same time.

Ben Hendrickson, 36, of Spokane and his friend Rod Noah, 58, of Chattaroy had been hunting the woods of Pend Oreille County for elk when the cat fluke occurred.

The two had been hunting elk for several days with little luck. That situation changed Monday evening when Noah called in what he thought was a deer.

“I was nearby, but Rod was doing the calling, so they were homed in on him,” Hendrickson told the Spokesman-Review. When the “deer” raised its tail, Noah immediately recognized it as a cougar. With a lion tag in his pocket, Noah took the 32-yard shot. “I’ve never even seen a mountain lion in the wild,” Noah said. “I didn’t hesitate at the chance.” Noah took the animal with a broadside shot. Then he waited.

“Heck, I needed a few minutes to get my heart rate down,” Noah said. Despite the adrenaline rush, Noah knew his shot was good. “I was using a lighted nock and it looked like a flare going right behind its front leg,” he said. “The lion jumped and crashed through brush out of sight down the hill, but I knew I’d smacked him hard.”

The two men followed the blood trail even though they were both sure the lion went in the opposite direction. “I thought the lion had gone left, but a blood trail doesn’t lie, so we followed it straight down the hill,” Noah said.

Once they found the animal the two called a taxidermist who instructed them to bring the animal in immediately for skinning. As the two were dragging the cat up the hill Hendrickson noted that the wound on the animal didn’t match the shot he’d seen Noah take.

“We look at the cat and the wound is right in the middle of his chest,” Noah explained. “I said, ‘That’s not right.'” The men went back to the site where the cat was shot only to find another dead catamount not 15 yards from where it had been shot. That’s right. Noah unknowingly shot two cougars with one arrow.

“He hit both cougars with one shot and they ran a short way and died almost right next to each other,” Hendrickson said. This revelation presented a problem though as hunters are only allowed one lion per season. Hendrickson admits his first thought wasn’t very honest. “I had a tag and the first thought was for me to just tag it and that’s that,” he said. “But then we wouldn’t be able to tell the story, which is too amazing.”

The men called the authorities. “So we called the game warden,” Noah said. “I didn’t know how it was going down, but we figured that was the right thing to do.”
Washington Fish and Wildlife Department officer Severin Erickson arrived on scene in less than an hour, listed to the men’s story, then gave his seal of approval.

“Their story all checked out,” Severin said. “Technically, it would be double-bagging – two cougars with one arrow – but it was an honest mistake. Legally, they’re required to check in with us and they did. Officers have discretion in these cases. I had to give him a warning, but there was no citation.”

Congratulations, Noah. That was a one-in-a-million shot.