Spring bear season in interior Alaska is part of my yearly routine. It means long nights of no darkness, the... 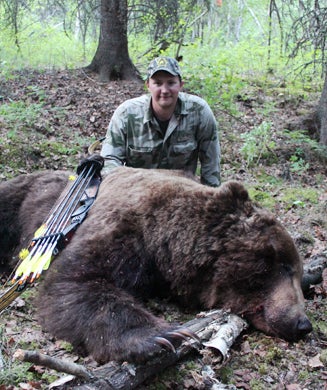 Spring bear season in interior Alaska is part of my yearly routine. It means long nights of no darkness, the sound of a two-stroke outboard, and a cool breeze coming off the river. But this spring was to be different. In the area we have hunted black bears for years, it would finally be legal to hunt grizzly bears over bait.

Every spring we’ve been plagued by grizzlies while black bear hunting. For the last decade or so, once June rolls around our baits would get completely overrun with grizzlies. In addition to that nuisance, grizzlies run off the black bears and are especially adept at picking off moose calves.

Two years ago I took a Pope and Young-class black bear off of a bait station we’ve used for a long time. Shortly after taking that bear, the grizzlies showed up again, but this time there was a big one in the mix–a really big one. I had several trail camera pictures of him and had seen his tracks in the mud next to the river. I even got one of his tracks tattooed on my shoulder. When I found out that the Alaska Board of Game had approved shooting grizzlies over bait in our specific game unit, the big boar became all I could think about. I had wanted to take a grizzly with a recurve bow for a very long time, and this would be my chance.

The bears showed up right on time again this season, first a big boar, then a sow with three cubs. Things were looking promising, but the trouble with trying to hunt grizzlies over bait is that the bears are roamers. Grizzlies, especially the big ones, hit baits randomly and often only once or twice, whereas black bears are much easier to pattern.

Although the odds weren’t in my favor, luck was on my side. When I checked the bait last Friday I found that my trail camera batteries had died, which meant no new pictures. But I noticed that the bait was scattered everywhere, and typically only big grizzlies do that. I replaced the camera batteries and returned the next morning to find pictures of an enormous and vaguely familiar grizzly. It had to be him.

My cousin and I settled into our stands at about 10 p.m., and after an uneventful three hours, we heard some cracking back in the trees. I was sure it was the big boar. I heard his breathing before I saw him in the thick timber, and my heart started pounding. I was almost embarrassed about how excited I was, but there in front of me was the bear I’d dreamt about. He flopped down to eat at about 14 yards, but I didn’t have a shot. After five minutes–which felt like an hour–we heard another bear coming in. I held ready to draw as the huge boar became more agitated with the approaching bear. Finally, he stood up. I drew, he turned broadside to face the incoming bear, and I buried one of my Easton FMJs up to the fletching behind his shoulder (coincidentally, I was hunting with a Bear’s Paw bow and the arrows are fitted with Grizzly broadheads). It was a perfect shot. The bear tore through the brush and piled up only 40 yards away.

There was no ground shrinkage with this bear. He’s a true monster by interior Alaska standards. I just couldn’t believe how huge he was! He seemed nearly as big as the coastal brown bear I shot last spring. When we skinned him out we found an old .375 bullet buried in his brisket. This bear’s hide squared 8 feet 9 inches, and his skull green-scored 25 7/16 inches. This score (depending on how much he shrinks) should put him in the top 5 or 6 overall in the Pope and Young record book, and it might even tie or break the world record of 25 5/16 inches in the Pope and Young traditional bow book.

While it’s cool to think he is likely one of the biggest recorded grizzlies ever to be taken with a bow, it means much more to me to have killed that specific boar after all the seasons he’s haunted me.