Australia’s Lake Kununurra has glowing barramundi and the aussies are just fine with that. In fact they planned it that... 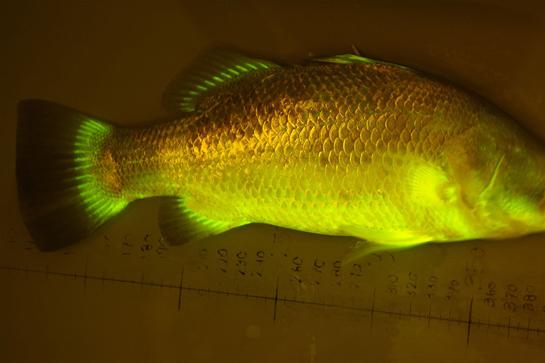 Australia’s Lake Kununurra has glowing barramundi and the aussies are just fine with that. In fact they planned it that way.

Captive bred barramundi fish stocked in Lake Kununurra undergo an unusual process prior to being released.

Jeff Cooper of the Kimberley Training Institute who has overseen the stocking of 70,000 barramundi told ABC Kimberly about the process: “Because they are 50 millimetres [about an inch and a half] in size, they’re a little bit too small to put a normal tag into. We’ve found an organic compound that we’ve effectively bathed them in at a small size and they’ve been able to take that up and it embeds on their bones.”

The result is neon, glowing barramundi.

Mr. Cooper says this process is only for identification and that eating the glowing fish posses “absolutely no harm to anyone who wants to eat them.”

This reminds we of a story we ran about glow-in-the-dark sushi.

The glowing barramundi are part of a $700,000 State Government restocking project.