Strange things were afoot…errr, a fin…in Lake Ontario. A video posted to You Tube last week, allegedly shot on Wolfe... 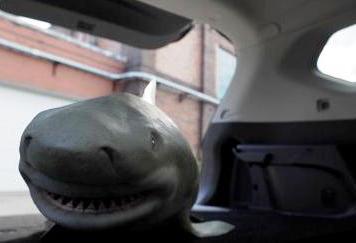 A video posted to You Tube last week, allegedly shot on Wolfe Island, where the St. Lawrence River meets Lake Ontario, shows three anglers responding to a mystery fish breaching near a dock. The fish is gray in color, rather large, and has a prominent dorsal fin. The latter characteristic caused many to cry shark.

That is, until Bell Media announced the video was staged to build hype for the Discovery Canada’s already wildly popular Shark Week programming. The animal in the video was actually a prosthetic model shark.

Of course not everyone saw a shark when watching the video, reported the National Post. Guesses as to the identity of the surfacing fish ranged from catfish to harbor porpise. One YouTube commenter wrote, “Guys it’s obviously a majestic dolphin.”

“It’s unfortunate that some people took what we did so serious,” said Discovery Channel president and general manager Paul Lewis. “If we upset anybody, of course I apologize for that…It would be totally counterproductive for us to go out there and upset and disturb our audience.”

The marketing team started working on the concept six weeks ago, and hoped the video would go viral. But when the plan succeeded too well and residents started to express concern, they cut the campaign.

I’m not exactly sure what other kind of response they were anticipating with this stunt. People have been known to panic when they suspect sharks are nearby. Here’s the original video below.