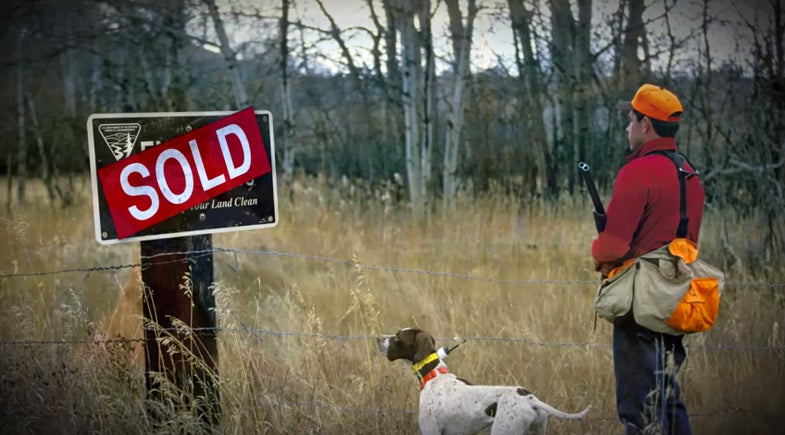 From Montana to Wyoming and Nevada to Utah, state legislatures are actively considering selling or giving large swaths of federal land—ground currently owned by the people of the U.S. and managed by the U.S. Forest Service and Bureau of Land Management, mainly—to the states.

You can read about the work of Montana State Senator Jennifer Fielder here , or about a report from Nevada that indicates the state would benefit from transfer of federal land. And you can read our previous coverage of the issue here.

It might be easy to chalk these discussions up to Sagebrush Rebels, the fringe groups that talked a generation ago about the benefits of privatizing much of the public land in the West. But that would miss the point, which is: the conversation about selling or transferring public land has never been louder or more widespread than it is now. And those of us who rely on free and open federal land to hunt, fish, and hike need to speak up to say that public-land management may be stressed, but it is not broken.

You can add your voice to the conversation by signing an online petition that will be shared with state and federal policy makers. Go to www.sportsmensaccess.org to find out more about this “divestiture” movement and sign the petition.

Because it appears that the movement that started in Western states has caught the ears of federal policy makers, and once the divestiture movement has Congressional support, it will be even harder to kill.

But here’s why it should die in its cradle:

-Most iterations of this divestiture idea claim that the federal government doesn’t have the resources to adequately manage federal land. In some cases—especially fighting wildland fires and controlling invasive plants—critics of the feds are right. These folks want to give these federal lands to the states to manage, but doing that won’t reduce the cost of management. The worry is that cash-strapped states won’t be able to manage these new properties, and will be tempted to sell them to the private sector. If that happens, sportsmen will lose valuable hunting and fishing grounds.

-Federal land management can be influenced by politics, but in my experience—and I’ve dealt with a lot of on-the-ground Forest Service rangers and BLM range conservationists—the influence of politics at the state level is far more pervasive than at the federal level. Do we really want state legislatures and county commissions, entities that are notoriously influenced by the tides of politics, dictating how our public land is managed?

-As every level of government figures out how to appropriate funds in a deficit situation, the idea of monetizing all those millions of acres of ground out there is increasingly appealing.

-And lastly, any transfer of federal lands would treat the most valuable acres—those with marketable timber, or fossil fuels, or subdivision-friendly viewscapes—differently than the rest. I could easily see a scenario in which states accepted the most valuable lands, but refused to manage the millions of acres of Western land that frankly don’t add much revenue to any government’s coffer.

I originally thought this “divestiture” movement was a scare tactic by the environmental community to mobilize sportsmen, and I have to admit that’s part of the hysteria here. But the deeper I get into the issue, the more concerned I am that we could lose huge chunks of the West to either poorly managed state agencies, or to the private sector eager to profit from what has traditionally been sportsmen’s most hallowed hunting and fishing grounds.