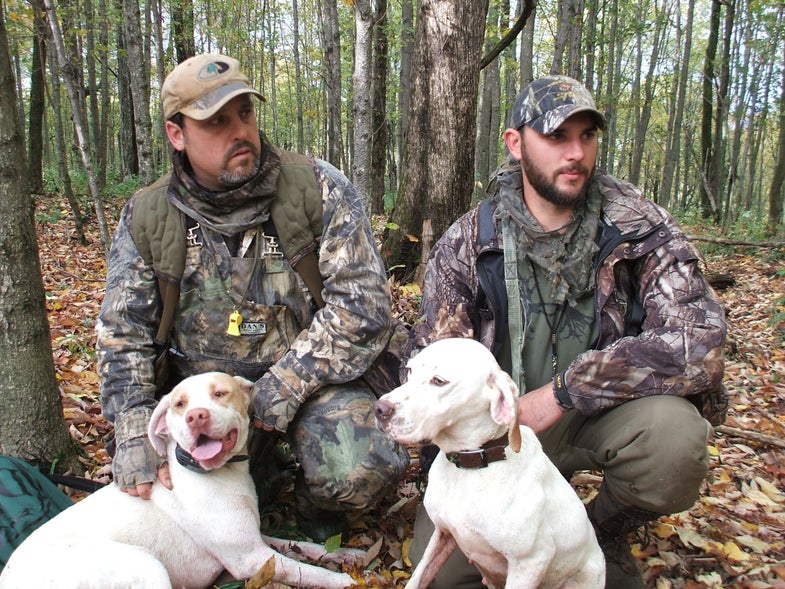 Radio talk as I drove 600 round-trip miles to fall turkey hunt New York State was of MLB playoff scenarios. In some ways turkey hunting is no different than the game of baseball, especially the balls and strikes deal.

October 1, Opening Day
Strike 1: I’d last hunted with my buddy Kevin Evans (emergent turkey dog man, longtime outfitter and guide) when his son Cody killed his first fall turkey, and we doubled on birds. That was back in 2005. We’d kept in touch over the years of course, with stories of turkey hunts and dogging talk. I was eager to hunt with his dogs Patchez and Suzie (ages three and from the same litter), having run my turkey-crazed English setter Midge with him during her early formative years. No sooner had the truck tailgate dropped, did we hear barking. Several turkeys winged away. We heard alarm putting, more barking, and moved in to set up near the flush site. Long story made short: the brood hen set up between us, our calling, and her vocal scattered charges. Mama turkey yelped them up, beating us at our game, and they vaporized.

Ball 1: In the final hour of legal shooting, set up with the dogs, we talked to a few turkeys on a near hilltop. No dice. No matter. Kevin’s canine duo soon flushed the group, scattering them for the next morning’s hunt.

October 2, Day 2
Strike 2: Sunrise to sunset New York fall turkey hunting hours offer all-day hunts. I planned on leaving camp by midday. We heard a loud turkey racket down the hill, away from last night’s flock break. We slinked in, dogs leashed, and talked to the birds. Footsteps in the leaves, coming in. Soon a super jake with a 6-inch beard walked up at just 10 steps. Problem is he had four other turkey heads around his. This was not “Bowling for Gobblers” so I had to let them all walk off. Soon Kevin and his guide Dave Ferguson released a dog each, and the brother and sister canine duo did their flushing duty. Game on, turkey dogging style.

Ball 2: We set up, talked to birds, but they regrouped. The guys released the dogs again. Of course that’s when a lone scattered turkey fired up and we talked back. Problem is, the dogs were out of the blind. You guessed it: the bird was on a steady walk in, as one dog came in, settled, but yet another worked the woods. At 40 yards, the turkey disappeared, veered, spooked. Hey it happens.

Ball 3: We took the dogs back to the truck where Dave stayed with them, assuming their solid flock scatter work would still provide some opportunity. Easing back through the high field, a big fat hen stepped out of cover, and in range. Call me a knucklehead, but I didn’t want to kill one that way (yelping one to the gun will never get old), though time was running out. With the count at 3 balls and 2 strikes, we set up.

Walk-off home run: I kee-keed to imitate a bird of the year, as did Kevin. One answered just over the near hillside. I scratched leaves with my right hand to imitate a feeding bird, steadied the shotgun on my left knee, faced the calling turkey. My buddy Evans purred. One bird, then two appeared. Two fall NY turkeys are legal in the same day where we hunted. As they shadowed each other, now a two-headed turkey, and threatened to drift out of gun range, I made a decision. When the two heads and necks lined up, I’d swing for the fence. Game over. Two NY fall turkeys with one shot. Tagged out. You can bet the dogs enjoyed getting a noseful of those birds back at the truck. A few hours later I was back on the road around noon, heading home.