The spring gobblers that waft in and out of our lives—refusing to sound off, ignoring our calling altogether, spooking at... 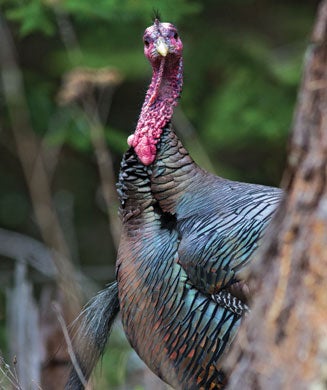 The spring gobblers that waft in and out of our lives—refusing to sound off, ignoring our calling altogether, spooking at an errant movement, stalling just out of range, drifting off with a real hen—can be good teachers.

But unless you end up with a dead turkey in hand, those hunting lessons are incomplete. How can you say, with any certainty, what really went wrong?

The best turkey hunters learn something new every day in the spring woods. But successful hunts serve as the ultimate golden opportunities to capture valuable turkey-hunting knowledge for future use.

One spring, three hunters, four states, eight birds: Here are the tales of the turkeys my sons, Ethan and Noah, and I shot last spring, and the lessons learned or confirmed from each one.

The first three mornings of the season brought miserable weather—mixed precipitation, wind—and no gobbling. But the stars are twinkling now. Gobbling cracks the pink dawn. I sneak as close as I dare into the bare woods and settle into the buttresses of an ancient oak. I call just once while the bird is on the roost—more gobbling. After fluttering down, he comes crunching through old patches of snow. I cluck once to help him find me. He redirects and slinks into range.

Lessons Learned:
▶ You don’t have to call much: When a gobbler’s alone and he knows where you are, sometimes it’s best to shut up and have faith.
▶ Knowing how birds react to weather changes will increase your odds for success.
▶ Setting up close to a roosted bird minimizes the chances that he’ll be intercepted by hens.

Today’s Class: The morning gets all messed up when we get a flat tire on our way to the prime hunting grounds. We make do in a secondary area. After chasing a flock for two hours, we finally glass a new group and loop way out on the rolling prairie to get ahead of them. Sneaking up over a knob, we spy a tail fan. I cluck once, the strutter raises his head, and Ethan drops him.

Lessons learned:
▶ Bad situation? Make do, and just hunt. You can worry about a flat tire later.
▶ You can’t call a flock back to where they’ve been, so don’t be a follower.
▶ Sometimes you must move out—really move out—and freelance it, getting ahead of the birds. It’s still hunting, even if it’s not classic and doesn’t involve meaningful calling.

Today’s class: Birds have been running from calls. We decide that we need to hunt them like deer. I choose to sit and wait at a field corner where turkeys like to feed. I don’t utter a sound, even with birds out in front. A hen sneaks up from behind and spooks, but now I pay more attention to that direction. On one slow swing of my head an hour later, I spot a gobbler right where the hen was. I raise the gun ever so slowly, like it’s mired in molasses. He gets a little nervous but hesitates—his downfall.

Lessons learned
▶ Don’t call if the birds don’t like it. Be patient. Just sit where they want to be. Wait silently, like you would for a whitetail.
▶ Be alert in all directions. This gobbler came in from behind like a ghost, without sound or warning.
▶ Do not panic or quick-draw on a turkey. You will lose. A slow and steady gun wins this race.

Today’s class: We need one more bird to fill Ethan’s last tag. Our rancher friend Bruce told us about a spot where the turkeys pass every morning around 6:30, near three trees and two open fence gates in a pasture. I build Ethan a blind of sticks and branches in the dark the night before our hunt. He sets up there before dawn. I hunt a half mile away, and at 6:28 a.m. I hear one shot. Ethan has dropped a double-bearded, 1 ¼ inch-spurred gobbler.

Lessons learned
▶ For intel on turkey travels, listen to and trust local folks who know, live with, and see the area’s birds daily.
▶ Just like whitetails, wild turkeys often follow funnels and take paths of least resistance—in this case, a cow pasture, fence, and open gates.
▶ Don’t leave anything to chance. I built just enough of a blind in a tough spot, in the dark, and while exhausted after having been up since 4:15 a.m.

Today’s class: During the late afternoon, the turkeys are out feeding. We sneak down the backside of a fence line and set up at a gap where we’ve seen birds crossing between fields. Like clockwork, they follow the turkey highway to our hideaway, and I shoot a 2-year-old gobbler at 30 paces.

Lessons learned
▶ Scouting pays. We saw these birds 300 yards from where I eventually shot one. Had we not known the ground, we never would have been waiting where we were.
▶ Get dirty: We spent half our stalk on our bellies in an army crawl.
▶ A warm, sunny late afternoon is great for turkey movement.

Today’s class: Frustrating day. We moved around too much in the morning and were either in the wrong place at the right time or the right place at the wrong time. For the evening, I tone it down and settle in at 4:45 p.m. for a long, long wait. Three hours later, birds start appearing in our field. After a few soft calls on my slate, a gobbler breaks off, marches a hundred yards over, and struts right in, just like that. Noah pounds him at 28 steps.

Lessons learned
▶ When frustration sets in, take a break. We went to town for midafternoon burgers and Cokes to shore ourselves up and relax before a long evening sit.
▶ Just waiting in a good spot is one of your best turkey-hunting bets at any time; patience and positivity are a turkey hunter’s greatest assets.
▶ Pay attention to the breeding phases. Just a week ago and a few miles away, birds were fleeing calls. Now they are coming in on a string to a couple of soft purrs and clucks.

Today’s class: A cold front blew in bringing roaring wind and temperatures in the 20s—feels like winter. We see birds a quarter mile away on roost, but they fly down and go the other way. We tough it out in the wind. An hour later—was that a gobble down the hill? I call as loud as I can on a box call. The bird sounds off and Noah says it’s a little closer. I say get ready now. I call again—loud—and the bird blows our socks off. In a half minute the gobbler jogs over the rise at 15 steps, and it’s over.

Lessons learned
▶ Sometimes (on a windy day, for example) you must call loudly so the birds can hear you. And remember: If you can hear them in the wind, the birds are closer than you think.
▶ Finding the right bird at the right time—a lonely gobbler—is the number-one key to success at any time of spring.
▶ Stick it out until the very last day of the season. May often sees a second gobbling peak.

It’s the last days of the season. The majority of hens are scattered and sitting on nests. Toms, though, are on the move, gobbling well and looking to breed the last few receptive hens. After a stormy night, it dawns clear, calm, and gorgeous. An hour after dawn, I glass a gobbler three fields over and call. He gobbles and starts in. Unbelievable. The bird flutters across a rain-swollen creek and serpentines through a pasture of cows to get to my decoy—where I drop him.

Lessons learned
▶ Late in the season, toms are still interested in breeding, and if the hens are on nests, the gobblers are lonely.
▶ Sometimes the best decoy is simply what a gobbler wants: a single hen. It helps to have that visual for him to focus on.
▶ Intense calling can work. Adjust according to the gobbler’s particular mood on a given day.