Why Bullet Design is More Important than Cartridge Choice

In the never-ending argument over cartridge choice, hunters might be focusing too much on the wrong thing 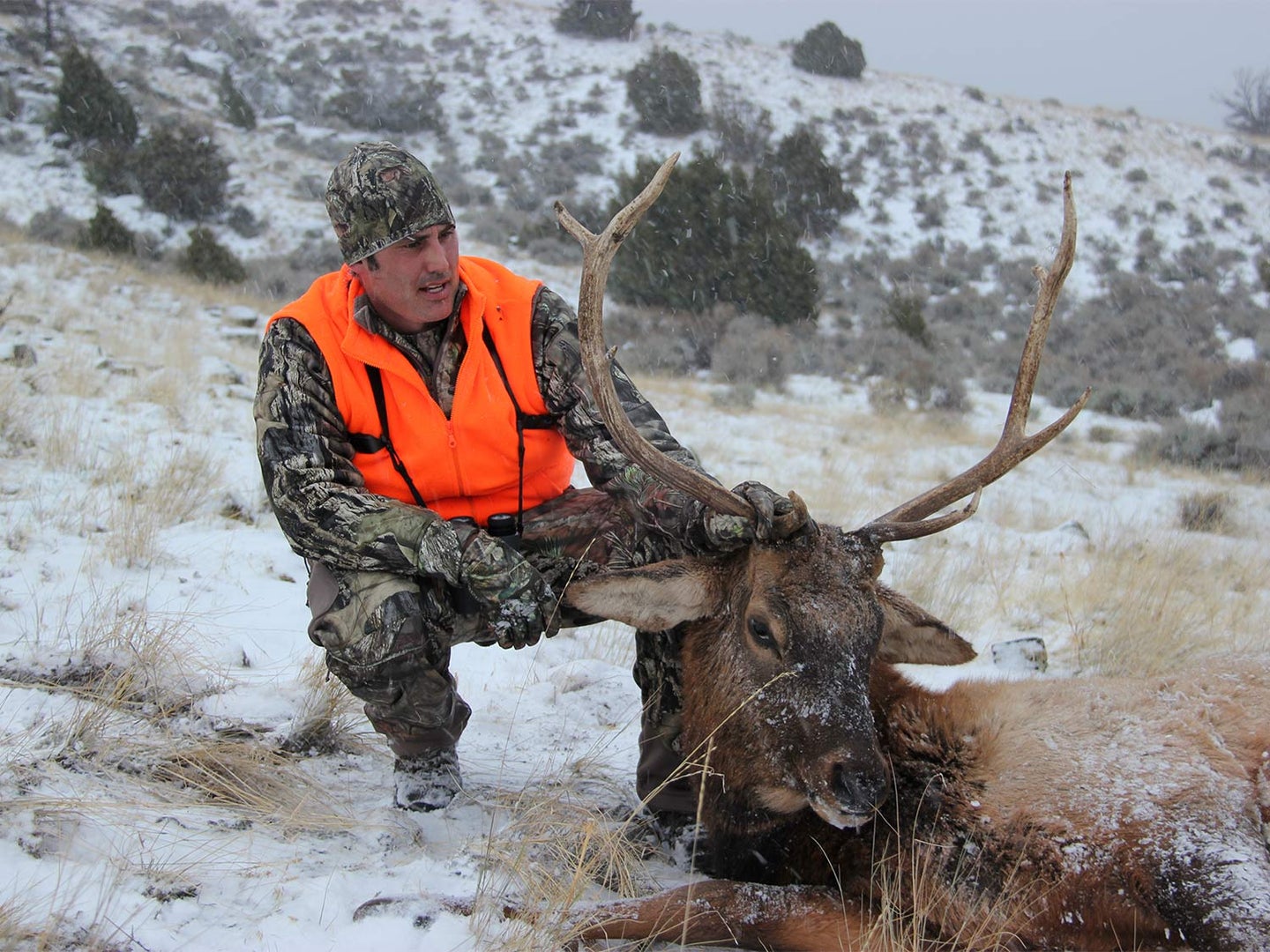 On large game like elk, light, weak bullets can deflect off of bone so a heavy, strong projectile is important. Brad Fitzpatrick
SHARE

Want to see some fireworks? Just walk into a bar in rural America during hunting season and proclaim that the 6.5 Creedmoor is an unequivocally superior deer cartridge than either the .30-06 Springfield or .308 Winchester. If you manage to escape that situation without major injury to your person, you’ll have learned a valuable lesson: Many hunters develop such a deep-seated allegiance to their preferred hunting round that any rebuff of their beloved cartridge elicits an intense emotional response.

These frenetic cartridge fanboys might lead you to believe that there is only one round in all rifledom capable of routinely dispatching game. Rarely, however, does a conversation about preferred hunting bullets create such a stir, and perhaps that means we’re missing the mark. While some cartridges do offer real, measurable advantages over the competition, it’s the bullet that actually dispatches the animal. I can’t tell you the last time I saw two hunters nearly come to blows over the superiority of their favorite hunting bullet, but the argument could be made that our choice of projectile is at least as important—and perhaps more so—than the cartridge that propels it.

Credit Where Credit is Due

One of my hunting mentors despised the .270 Winchester and thought it unfit for use on any game larger than coyotes. When I asked why, he told me that he had used the cartridge to harvest two deer in Virginia in the 1960s. On both occasions, he said, the .270 caused extensive meat damage, and he could scarcely salvage either front quarter from those two animals.

Like many other hunters, I’ve used the .270 to harvest deer, and my own experience with the cartridge has been very different. The .270, with the right bullet, will kill whitetails cleanly without excessive meat damage. The problem that my mentor encountered was not the result of the .270’s inherent failings; rather, it was an issue of poor bullet selection.

The mid 20th century was the Magnum Era when cartridge designers were focused almost exclusively on increasing velocities. The problem, however, was that most hunting bullets available at that time could not keep pace. Hunting bullets of that era were almost exclusively cup-and-core designs, essentially a lead core wrapped in a streamlined copper jacket. As velocities increased, so did the odds of bullet blow-up, and that resulted in meat damage and wounded game.

In 1947, John Nosler was disappointed with bullet performance on large game, and he set out to develop a bullet that wouldn’t break apart at high velocities. To accomplish this, he machined a bullet with a copper bridge that separated lead cores fore and aft. This allowed the front portion of the bullet to expand on impact while the rear portion of the bullet held together and continued to penetrate. It became known as the Nosler Partition and became the first commercially successful controlled expansion bullet.

Nosler’s design was just the first in a series of major developments in bullet design. By electrochemically attaching the lead core to the bullet jacket, manufacturers managed to create projectiles that were less likely to experience jacket/core separation–a process known today as bonding. Randy Barnes developed the first monolithic zinc/copper bullet, known as the X Bullet, and by eliminating the lead core, Barnes created a projectile that would expand and penetrate on large game even at high velocities without the risk of jacket/core separation.

Polymer tips and improved metallurgy further advanced bullet design, and modern bullets are designed to have a higher ballistic coefficient than ever to perform more effectively on game at long ranges. Today’s crop of modern bullets allow hunters to customize their hunting rifle to perform on a wide variety of animals under different conditions, and these bullets perform predictably across a range of velocities. It’s a quiet revolution that’s forever changed the way we hunt.

A Bullet that Works at Various Ranges

It’s hard to say how far a shot might be under field conditions. That buck you expect to step in the clear at 400 yards might just slip out of cover behind you at 40 yards. As a result, the bullet’s impact velocity will be much higher, and that will lead to different performance. You need a bullet that functions across a wide range of velocities under those circumstances.

That was the challenge set before the engineers at Federal Premium Ammunition when they set out to design an all-range hunting bullet. Production of that new bullet, the new Edge TLR, required the team at Federal to weigh a number of factors when designing an all-purpose hunting bullet—and the process is illustrative of the considerations hunters need to make when selecting a single bullet for multiple applications.

“A sleek, elongated boat-tail profile is another critical part of the (Edge TLR) performance package, and like the rest of the bullet’s design, it didn’t happen by accident,” says JJ Reich of Federal. “Longer boat-tails yield higher BCs. The tradeoff is lengthy tails can reduce stability.”

Federal engineers extend the length as far as possible without taking a bite out of bullet stability. They also selected bullet weights that are as heavy for caliber as possible while still maintaining stability through the different barrel twist rates common in today’s hunting rifles.

The Edge TLR offers high BCs from a bullet that features an electrochemically bonded jacketed and core. The jacket thickness is designed to slowly expand at close range and high velocities, and yet Federal engineers found that the Edge TLR would still expand at velocities as low as 1,200 fps. The Edge TLR also uses a new polymer tip design known as the Slipstream that has a higher melting point than some competing tips. That means the bullet profile remains intact even at long ranges. There’s also a single channel cut in the bullet that reduces drag over competing shank designs. For hunters needing an all-purpose bullet, high-BC projectiles with bonded cores are a solid solution.

Here’s what this looks like in practice and an illustration of why bullet selection really matters. The Edge TLR 130-grain in 6.5 Creedmoor carries 1578 ft. lbs. of energy at 300 yards. Compare that to a .308 loaded with a 150-grain Nosler Ballistic Tip which produces 1640 ft. lbs. at 300 yards. The difference between the two cartridges is less than 100 ft. lbs. When they get out to 400 yards, they’re neck and neck–at 1382 ft. lbs. each. By selecting the right bullet type for the application–in this case, Edge TLR for 6.5 Creedmoor–a smaller cartridge can perform similarly to one in a higher weight class.

This chart examines how bullets of the same weight perform at sea level when the ballistic coefficient varies. As you can see, improving BC also increases velocity and retained energy downrange, and improving BC flattens trajectory and helps reduce wind drift. The takeaway: higher BC hunting bullets offer measurable improvements in performance. Comparison of 180-grain .30 caliber projectiles based on ballistic coefficient

What Makes a Good Hunting Bullet?

The obvious answer is one that kills game quickly and efficiently. Hunting bullets kill by expanding and shedding energy. That expansion generates hydrostatic shock and damages vital tissue. A bullet that does this efficiently and consistently is effective on big game, and a bullet that fails to do so isn’t. Simple as that. Our preoccupation with finding a perfectly-mushroomed bullet has led many hunters to believe that only a bullet that performs as such can be effective, but that’s simply not true. I’ve seen bullets that expanded and even broke apart in game that had a dramatic and definite effect, killing the animal very quickly. A recovered bullet doesn’t need to be beautiful. It simply needs to shed energy.

There are several critical factors that affect bullet performance, all of which will prove crucial when you’re selecting the right hunting bullet. It’s rare to find a projectile that will hold up at high velocities and short ranges that will also function effectively after traveling for a half-mile, which is one of the factors beyond hitting your target that makes long-range hunting a complex endeavor. Nevertheless, if you’re planning to hunt big game at extended ranges there are some good bullet options including Berger’s Hybrid Hunter, Hornady’s ELD-X, Nosler’s Accubond Long Range, Federal’s Edge TLR, and Barnes’ LRX. All of these bullets have high ballistic coefficients so they’ll carry energy and velocity better at extended ranges, and they’ll all expand more reliably at lower velocities than many traditional hunting bullets. At more moderate ranges—say 400 yards or less—it’s easier to choose a bullet since the velocity variation won’t be as dramatic. True magnum velocities require tougher bullets for big game, but the science—or perhaps the art—of selecting the right bullet is to select a projectile that will hold up to high velocities at close ranges yet will expand reliably at the increased ranges.

Shot placement is a key factor. Broadside shots behind the shoulder work with a wide range of hunting bullets (so long as they penetrate to the vitals), but shots that hit bone—whether an on-the-shoulder shot or a quartering shot–demand heavier, tougher projectiles. For heavy bullets at high velocities, tough monolithic bullets work well, and there are several suitable options including the Hornady GMX, Barnes TSX, and Browning BXS. Older bullets like the Nosler Partition and Swift A-Frame work well, too, and all of these bullets are versatile enough for a wide range of game at varying distances. Today’s sophisticated hunting bullets are more versatile and perform better than ever before, a product of vastly-improved bullet design.

Hunters may not ever be as impassioned about their favorite hunting bullet as they are about their favorite cartridge, and that’s okay. But as arguments over cartridge superiority continue, let’s not forget that the effectiveness of the cartridge that you select hinges upon the construction of the bullet with which it is loaded. Choose wisely.