Deer Kicks 5K Runner in the Head, Rips Off Part of Her Ear—and She Still Walked to the Finish Line

"The top of my ear wasn't attached anymore. So panic set in" 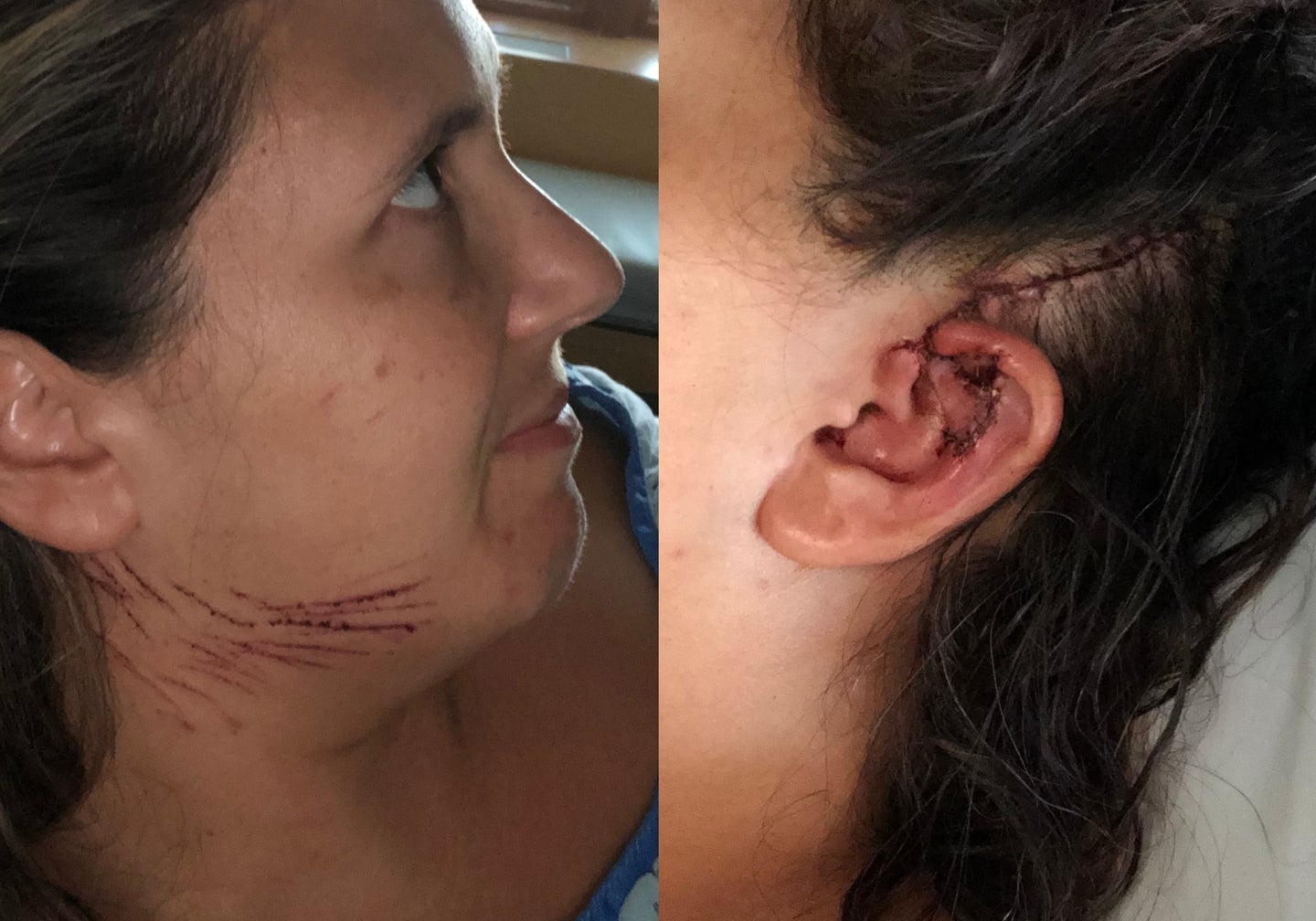 The finish line was almost in sight for Rebecca Heasley during the Geauga County Part District “Space Race” on Oct. 1 when disaster struck—struck her in the head, more specifically. Heasley, of Willowick, Ohio, was running along the wooded trail with her headphones in when, out of nowhere, something slammed into her.

“Everyone was trying to finish their last lap and at first I thought it was another runner, and I was like, ‘gosh, how rude,'” Heasley, 40, says. “But then I saw the blood coming down and I felt it rush, and then I realized I wasn’t hit by a person.”

Heasley fell into some bushes along the side of the trail. Her sister Victoria, who ran the race with her and was right behind her at the time, informed her that she was kicked by a deer that had bolted through the crowd of runners.

Another runner informed her there was no cell phone reception on this part of the trail, but a few EMT trainees were present. Eventually, they figured out that the most efficient way to get Heasley out of the woods was to have her walk.

“They got me up on my feet and we walked out to where the finish line was, since that was where the ambulance was,” she says. “So in a sense I finished the race, just not using the normal route.”

In the video below you can see a deer, which looks like a pretty decent buck, bounding through the race course. There was a small group of deer scattered across the course, so it’s unclear if this was the deer that kicked Heasley.

Once they got her to the ambulance and took a look at the wound, they discovered she’d been cut from about three inches above her ear on her scalp down to the middle of her ear in a perfect straight line. She also had some scratches on the other side of her face from where she fell into the bush.

Heasley was taken to University Hospitals in Cleveland at around 9 a.m., where she waited for a plastic surgeon to stitch her ear back together. But she wasn’t considered a high priority, and eventually the hospital administration gave her the option of waiting overnight and going under anesthesia the next day or receiving a local anesthetic and staying awake for a bedside procedure. Heasley opted for the quicker bedside procedure, noting her high tolerance for pain. She forgot to ask the surgeon how many stitches she needed and overall wasn’t too phased by the ordeal.

READ NEXT: Michigan Cross Country Runner Gets Run Over by a Whitetail Doe

“I finally got to eat around 3 p.m. and learned quickly that my jaw really hurt, since my jaw is attached to that part of my head,” she says. “My teeth are fine, I still have them all. As silly as it sounds, I was so lucky that I had earbuds in. If I’d heard someone say that a deer was coming up, I would have turned and it would have been my face. This is something my hairline will hide. You won’t be able to see the scar. It could have been worse.”

Heasley won’t let the ordeal keep her from running in the woods.

“I’m going to get back out there. It’s nature. That’s their domain,” Heasley says. “Everyone’s asking if I killed the deer, and I’m like ‘No!’ The deer’s going to do what the deer is going to do—get through the woods because there’s a ton of us out there.”