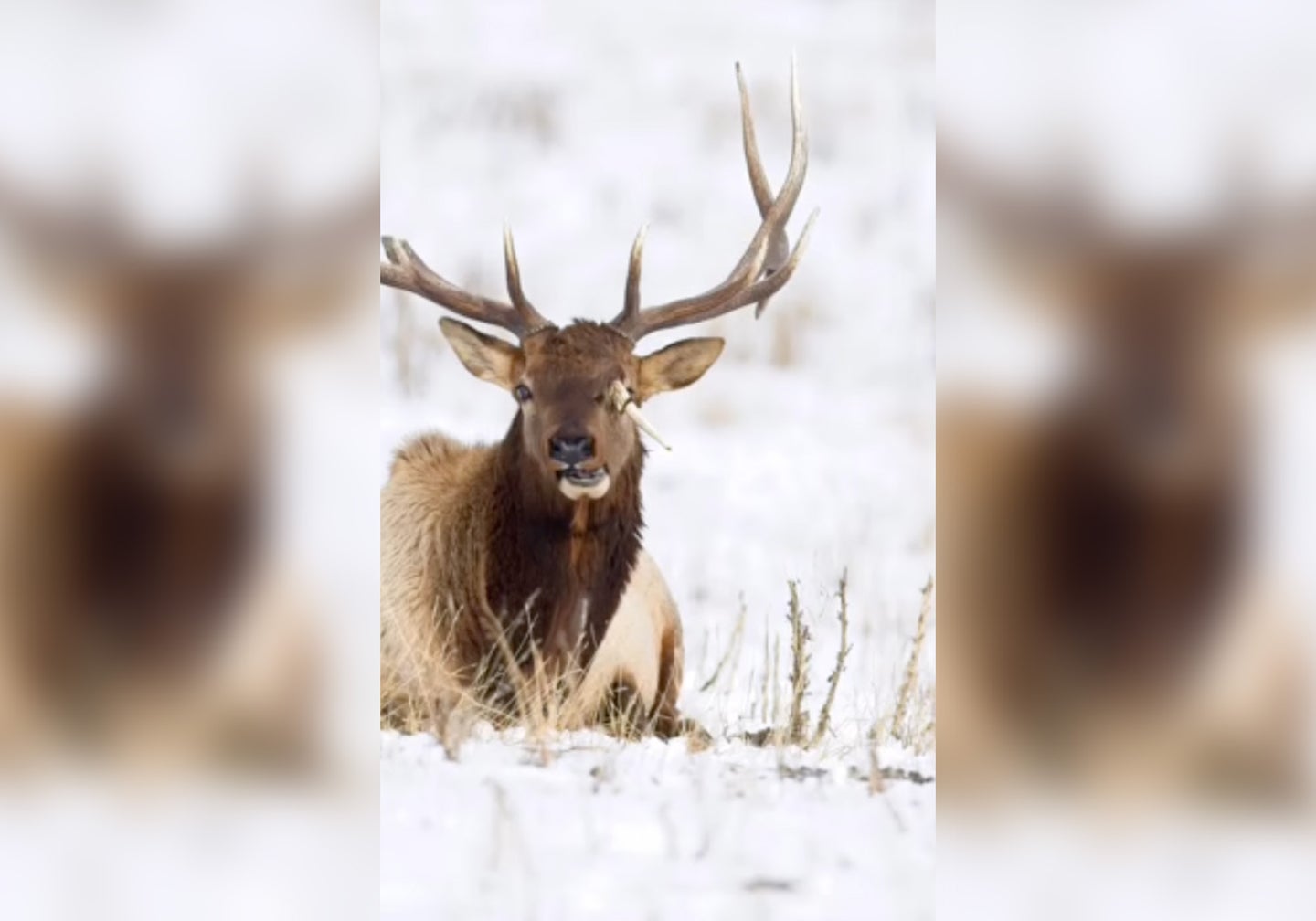 The piece of antler in the elk's head is slowly working out the other side. Instagram / Peggy Peregrine-Spear
SHARE

A Utah-based wildlife photographer is documenting the grisly world of animal competition by posting Instagram updates on a bull elk that has an antler sticking out of its head. Peggy Peregrine-Spear first shared images of the bull on Oct. 9. Over a month and a half later, it’s still walking around with a souvenir from what we can only assume was a brutal fight with another elk. The bull’s own right antler is also broken off on the main beam just below where the G3 should fork off, raising questions about whether the antler belongs to the bull or its opponent.

Upon first look, you might think the bull is growing a tine from its eye socket, which we’ve seen happen to deer before. It wasn’t until Peregrine-Spear posted a second video of the bull on Oct. 12 that the truth came to light, as the video shows the broken end of the antler visibly protruding from between the bull’s own pedicles. It’s clear as day: this bull has a long chunk of antler skewered straight through its head.

“There does not seem to be any discharge or much swelling, and he seems to be moving around fine, and he still has the energy to bugle,” Peregrine-Spear writes in the caption on the first post. “He does however not really eat and does quite a bit of licking tongue movements. I’m guessing there may be discharge that is going on on the inside of the nasal cavity.”

Another photographer commented on Peregrine-Spear’s second post and hypothesized that the antler is just stuck underneath the skin and didn’t actually pierce the skull or nasal cavity.

In Peregrine-Spear’s third and most recent post about the bull, she points out that the amount of antler exposed next to the bull’s left eye has grown, meaning the chunk is likely pushing through the wound like a giant splinter.

“It appears that the antler is working [its] way out below his eye, but you can still see the broken edge of the broken antler embedded in the top of his head,” she writes. “His body condition is still good.”

Multiple users have commented asking if the Utah Division of Wildlife Resources could sedate the elk and remove the antler. Utah DWR confirmed no one has reported the elk to their staff yet.

Bulls fight with violent fury during the rut. Their confrontations sometimes result in broken antlers, injuries, and even death. Other times, their antlers can become interlocked, causing one or both bulls to struggle to survive. If the issue isn’t addressed, the stronger bull might end up with a deadhead stuck to theirs, like in this video from Montana.