Matt Bateman thrives when it's hot in the high country. These are some of his secrets 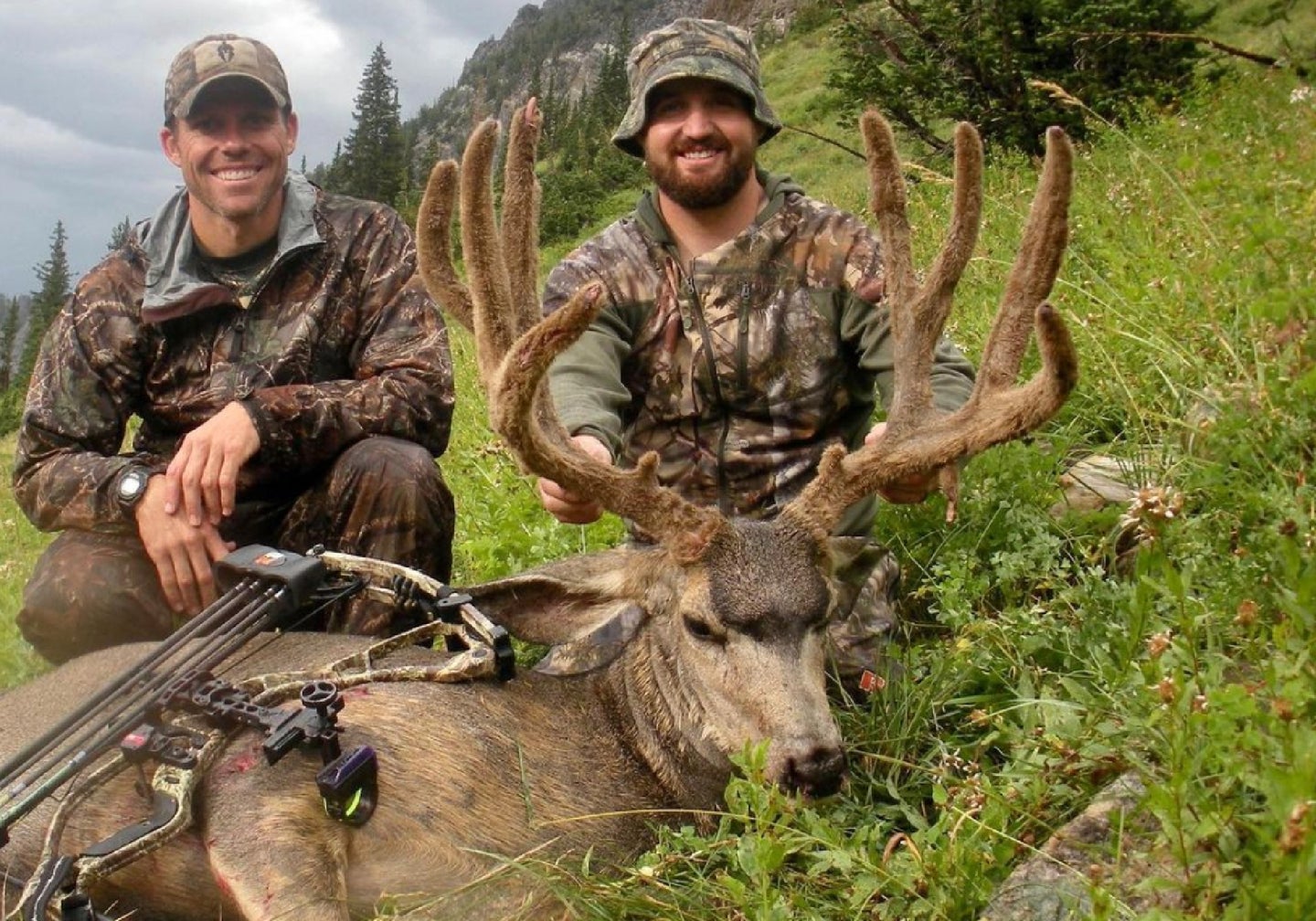 Three weeks before Matt Bateman notched his mule deer tag in central Utah, the Beehive State wrapped up its hottest month on record. July in Salt Lake City topped out at an average 87.3 degrees Fahrenheit, an absolutely blistering temperature when you consider that average includes nighttime lows.

Meanwhile, up in the mountains, water trickled slower and slower, vegetation got drier and crunchier, mule deer antlers kept growing under cloaks of velvet, and the archery opener crept closer. By the third weekend of August, Matt Bateman had already put countless miles on his boots, scouting for muley bucks high up in the mountains and delivering gallons of water to future glassing points.

“I like to be up top and hunt down. That’s my strategy and approach,” the Utah native and national sales director of Grim Reaper broadheads told Outdoor Life. “To do so, I have to stash water. Day in and day out when it’s hot and you’re trying to stay hydrated, it just doesn’t make sense physically to hike 2,000 vertical feet down to get water every day or two.”

Leaving a breadcrumb trail of hydration stations around the mountains is just one of the ways Bateman tackles hunting hot, high, and early. He’s got some stud mule deer bucks, taken in velvet on public land to prove that his tactics work—including this year’s buck, which he killed less than 48 hours into the season.

But it takes more than just moisture-wicking clothes and a little extra water to make a first-week archery hunt in the high desert work out. It takes an extra stealthy approach, a mindset with equal parts patience and aggression, and a flexible packout plan. Bateman has mastered all three.

The terrain Bateman hunts is generally full of thick, scrubby brush and lots of loose scree fields on steep grades. In other words, he could play the land like a heavy-metal drum set if he’s not careful. During last weekend’s hunt, he had to cross a rock field to close the 400-yard gap between his glassing spot and his target buck, and he had to do so without blowing out six other bucks nearby.

“Going across that rock chute, I knew there was no way I was making it across there without knocking boulders and rocks. But I have experience with that noise of rocks tumbling down the hill, and I’ve found it to not really be something that blows the deer out,” Bateman said. “They’re used to it. There’s mountain goats milling around knocking rocks down all the time.”

“Your clothes rubbing against brush or your bow clinking on a rock or something unnatural, that’s a totally different story,” he said.

To eliminate potentially disastrous noises during last weekend’s sneak, he first changed into his trusty leather-soled stalking boots. Hunting in a moccasin-style boot is quickly becoming a popular nod to the ingenuity of indigenous hunting tactics, and they’re a major upgrade from Bateman’s old strategy of stalking in his wool socks.

“They allow me to feel every little rock and twig, plus they save my expensive socks,” he said. “When I stop and put them on, it puts me in a ‘game time’ mindset. Bowhunting is so mental and it makes me stop and focus and think about what I’m doing and even think about those centuries ago doing the same. That’s such an awesome feeling.”

After changing footwear, he left behind everything except his bow, rangefinder, and binos for the last 50 yards of the stalk.

“I dropped my pack and got well hydrated because I wasn’t gonna pack anything with me,” Bateman says. “I’ve had all-day standoffs before where I’ve gotten pretty thirsty and dehydrated.”

He didn’t realize it at the time, but he was gearing up for what would be a four-hour standoff with this buck—without any visual proof that the buck was still in his original bed. This is where the patient mindset and complete commitment to one animal became crucial.

“I said to myself, ‘what else do you have to do?’” Bateman says. “I didn’t have anything else spotted. There was a good chance he was still right there. So I thought ‘don’t screw this up because this is the best thing you’ve got going right now.’”

Midday had rolled around and Bateman was at least partially confident that his target buck was still bedded in the same spot. He crept along at a glacial pace.

“The closer I get, the slower I go, period,” Bateman says. “I’m super tedious about things.”

He eventually got within a 50-yard range of the buck’s bed, or so he estimated according to a photo he’d taken through his spotting scope that morning. Bateman nestled down into the brush.

“Then it was a waiting game, honestly,” Bateman says. “I ended up sitting on him for four hours without having any visual that he was still there. The wind stayed pretty solid for me, but every time it’d swirl just a little bit with some thunderstorms rolling through, I got keyed up and ready just in case he caught my wind and stood up.”

Animals don’t like moving much during the day when temperatures are high. But that doesn’t mean they don’t do it, Bateman says. The trick is to be the hunter who stays out there all day, gets aggressive without blowing deer out, and knows their limits. Occasionally, the four-hour wait works—like it did this time.

“I start thinking he’s gone. Your head plays those tricks on you. I thought, should I try and get closer? Should I throw a rock down there? But experience won over for me on this one,” Bateman says. “I just knew the best thing to do was to sit it out, and if he was still there, let him naturally get up. So I started my stalk at about 12:30 and just before 5 o’clock I see antlers stand up right where I thought he should be.”

Bateman took a quartering-away shot at 57 yards. After a summer of scouting and prep and a four-hour wait, he had his velvet buck less than two days into the season.

Perhaps the most complicated factor of a late summer archery hunt is how the packout turns into a race against time. But depending on the terrain, the weather pattern, and the time of day the tag gets notched, Bateman says that a 24-hour extraction is viable without ruining the meat or the velvet.

“Even in the hot part of the summer, generally, it cools down at night enough that you can preserve meat and velvet without having to get too extreme,” Bateman says. “I was by myself and I got this deer down in the evening, so luckily it was starting to cool down a little bit and a thunderstorm was building. I had plenty of time to take some pictures and get the deer quartered up and caped off and get the quarters in game bags.”

In this climate, the best places to hang meat overnight are the ones that sit in lots of shade and have room for wind to move through. Bateman also advises considering how long the spot will be in shade the next morning while you’re hiking back out.

“I felt comfortable that I could leave the meat and everything in a spot that would offer morning shade, because I knew I couldn’t haul it all out myself right then and there,” he says. “I used to maybe be that tough and maybe I could have killed myself doing it, but I didn’t need to.”

But sometimes conditions don’t cooperate. Maybe the sun scorches down from its midday position or you find yourself on a south-facing slope that lacks any reprieve from sunrise to sunset. In that instance, grit doesn’t just win the day—it saves it.

READ NEXT: Mike Hirschi Might Be the Greatest Trophy Mule Deer Hunter in America. These Are (Some of) His Secrets

“It’s been 90 degrees and we’ve had to leave all of our camp and our gear and get a deer quartered and loaded and straight off the mountain,” Bateman says. “We’ve had to call people to pick us up from different trailheads. We’ve had to hitchhike. You have to be able to play it by ear and do what you need to do to take care of the meat and the animal. Sometimes you have the luxury, other times I’ve had to load a full deer on my back and just grind it out and go straight out the bottom and find somebody to pick me up or hitchhike.”

No matter how you slice it, early season archery hunts in hot, dry climates are an absolute grind from start to finish. You can only plan for so many variables, like the incessant need for water and quiet shoes. As for the variables you can’t plan for, reserve some energy to deal with them as they come.