How Long Does It Take a Billfish to Recover After It’s Caught and Released? 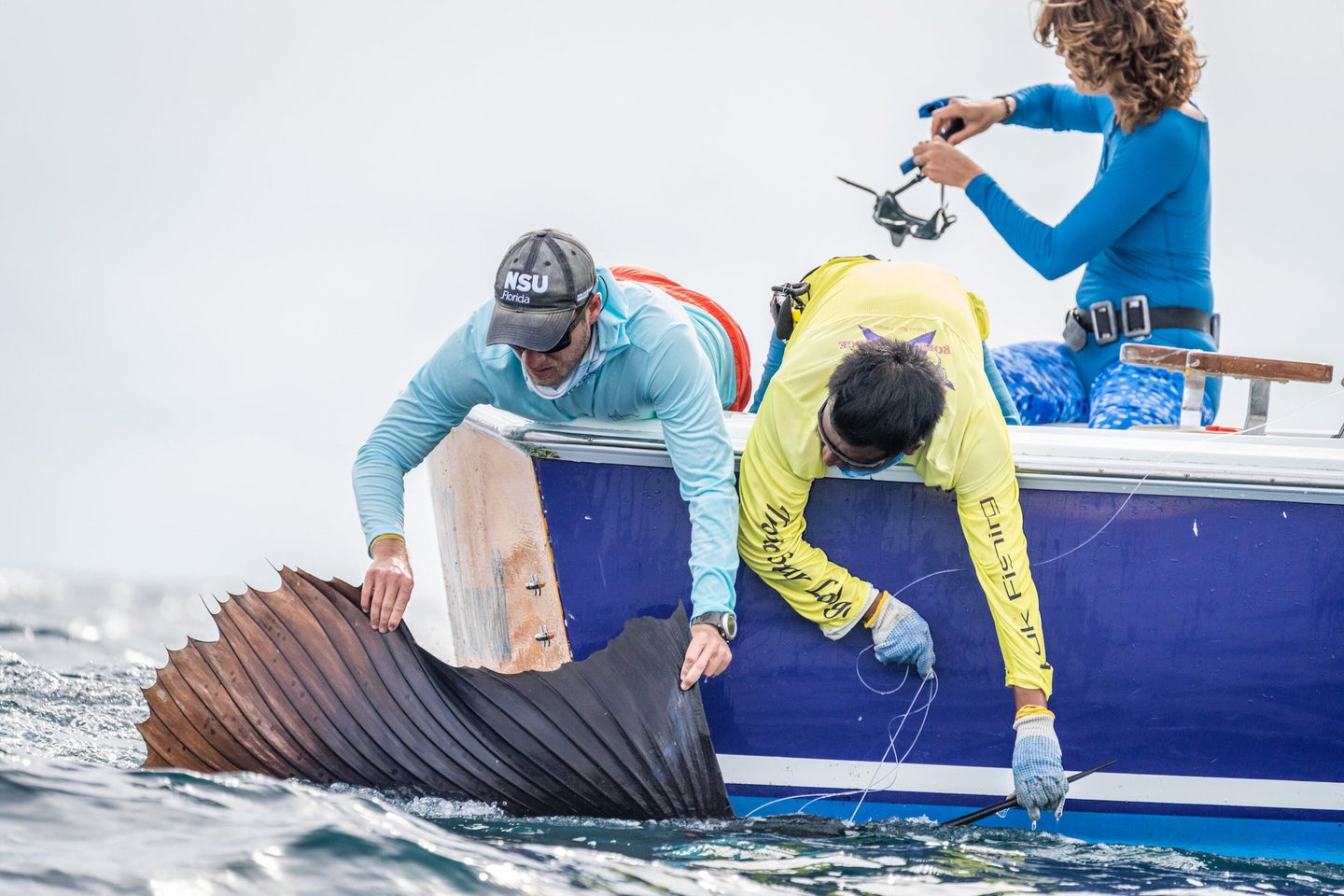 A new study conducted by Nova Southeastern University and the Guy Harvey Research Institute used remote tracking sensors to better understand the health and behavior of two popular billfish species: blue marlin and sailfish. The study, which was conducted off the coast of Panama, looked specifically at how these fish recovered after being caught and released by sport fishermen.

“For the angler, a billfish fight consists of a fast-paced, high-energy battle of wills that hopefully culminates with a leader grab and a safe release of the fish, some high fives, rehydration, and re-setting the spread for the next one,” says Ryan Logan, a research associate at NSU and the lead author of the study. “For the fish, on the other hand, this is a fight for its life using a tremendous amount of energy. It was those high-speed runs and aerial acrobatics that made me wonder: How long does it take them to physically recover from that fight after being released?”

As it turns out, the answer to this question varies depending on the species. Blue marlin are the top dogs of the saltwater fishing world—mainly because of their size and their ability to fight heroically for hours on end. This size and strength come at a cost, however, and the study found that it took them roughly nine hours to fully recover after they were released by anglers. Sailfish, being smaller and somewhat easier to reel in, recovered in about five hours, according to the study.

The research also indicated that both species swam much harder right after they were released. This response might seem unexpected, as humans and other mammals need to rest after running or exercising. But since fish breathe by running water through their gills, Logan explains, swimming harder and faster is their way of catching their breath.

To conduct their research, Logan and the team attached remote sensing tags to the fish after they were caught with a rod and reel. These newly designed tags are essentially homemade Fitbit’s for fish. They’re equipped with an acceleration data logger complete with depth, light, and temperature sensors.

“Most tags would only record how deep they’re swimming. Which is good to know, because it lets you know if the fish lives or dies, but it doesn’t really tell you how long it actually takes them to recover,” Logan explains. “The tags that I use are recording every single individual tail beat that fish makes—if the fish is rolling to the right or rolling to the left, if its body is pitched up or pitched down. So, I can get a really fine-scale view of exactly what body orientation and swimming patterns that fish is expressing right after being released.”

The results of the study are important because in many offshore fisheries throughout the world, managers have instituted catch-and-release programs to protect billfish stocks. Up until now, though, it’s been difficult to gauge how well these programs are working. This “fine-scale view” that Logan refers to provides the most complete picture to date of how billfish respond to being caught and released.

“We can determine that blue marlin and sailfish do recover relatively rapidly after being released,“ Logan says. “For the most part, it would appear that catch and release is a good method and not a severely inhibiting method for these fish.”

Blue marlin and sailfish are two of the most sought after sportfish in the world. Their populations are declining, however, mainly due to overharvesting and changing ocean conditions. There are growing concerns over recent developments in commercial fishing technology, including the rise in fish aggregating devices and large-scale longline fisheries. As a result, the International Union for the Conservation of Nature lists both species as vulnerable, with some populations listed as endangered.

This most recent study lays the groundwork for future research on billfish behavior, allowing researchers to better understand how marlin and sailfish respond to stress and human interaction. The more we know about how they respond to being caught, the better our chances of protecting and conserving these iconic sportfish for generations to come.