Largemouth Bass Virus Has Been Discovered in Wisconsin Smallmouth Bass

Smallmouth bass in Green Bay and Lake Michigan are showing signs of a virus that's usually found in the eastern U.S. in largemouth bass 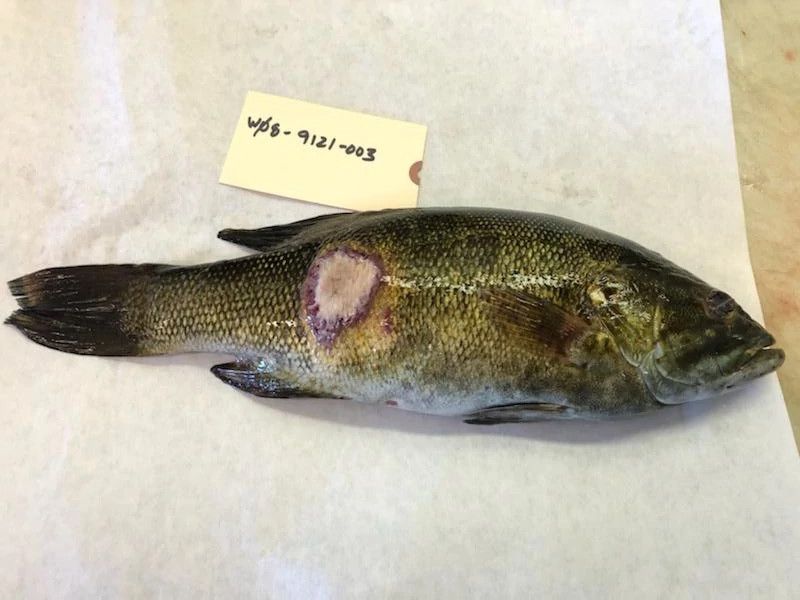 The Wisconsin DNR has confirmed that a disease known as largemouth bass virus, which is usually found in the eastern U.S., has been discovered in Lake Michigan and in Green Bay along the upper Wisconsin Door County Peninsula. The virus potentially could impact the area’s well-known excellent smallmouth bass fishing, since the disease can be fatal in bass.

The DNR reports that in September, 14 diseased smallmouth bass were collected from the waters surrounding Door County and examined by DNR fisheries staff. Collected fish had skin wounds that appeared red, ulcerated, and varied in size and location. The skin lesions often had a cream-colored layer of dead tissue in the center of the wound. The virus can cause weakness in bass, abnormal swimming, over-inflation of the swim bladder, reddening, and death in largemouth bass.

DNR reports that since 2008 smallmouth bass displaying similar skin lesions have been sampled periodically during several outbreaks in Lake Michigan and Green Bay waters. Tests on those fish had been inconclusive, however, until now. The largemouth bass virus had previously been reported in Wisconsin’s portion of the Mississippi River, but only now is it confirmed in Lake Michigan and Green Bay.

The Wisconsin Department of Natural Resources is now advising Wisconsin anglers to do the following:

2. Do not move live fish from a waterbody.

3. Handle bass intended for release as quickly and gently as possible.

5. Refrain from hauling bass in live wells that will be released.

6. Report smallmouth bass with skin lesions and dead or dying fish to the DNR.

7. Thoroughly cook fish that will be eaten, and never consume dead or dying fish.