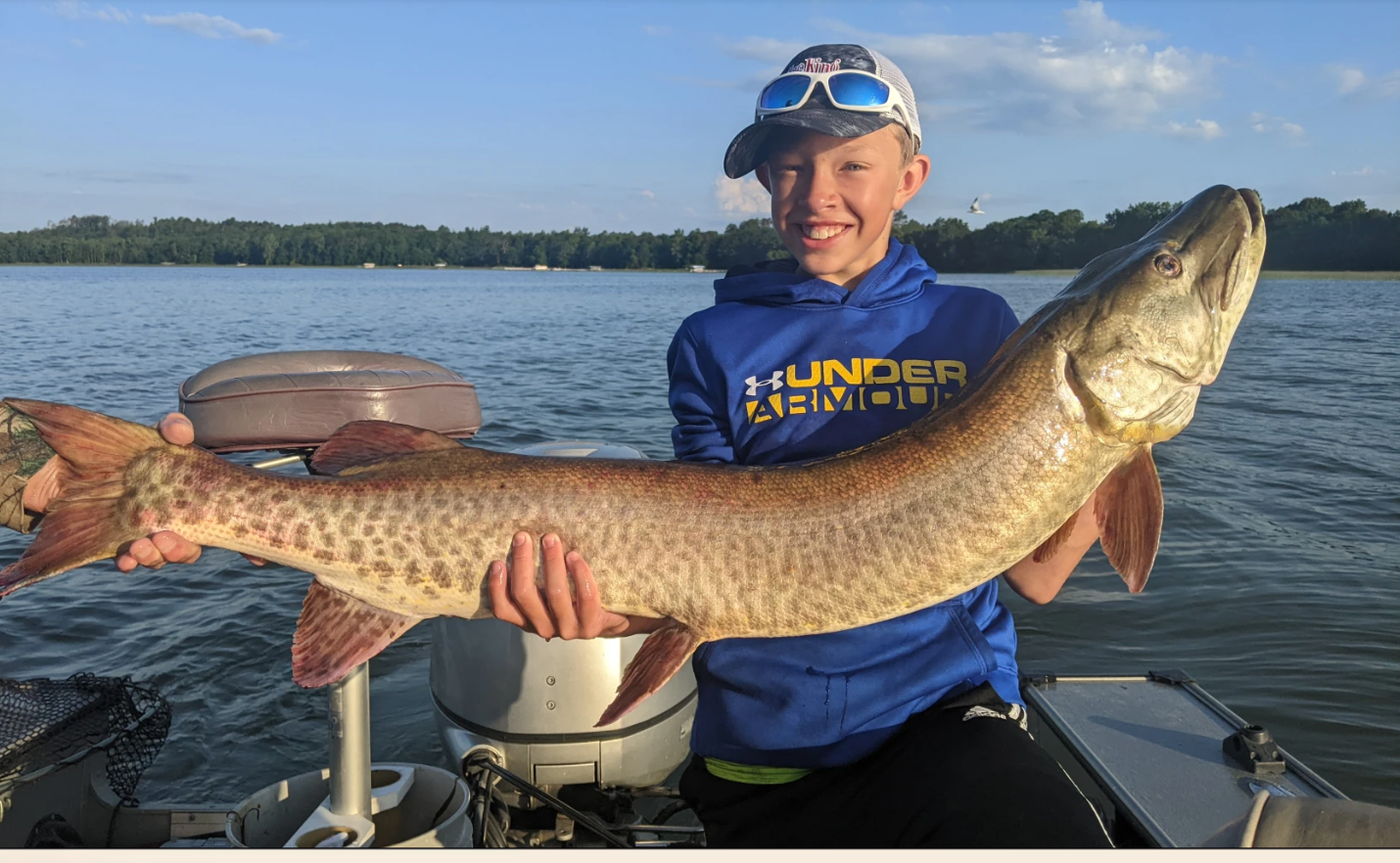 Few ever forget the fish they caught as kids. Maybe the fish grow a little larger over time, or the fights become more strenuous, but those childhood angling adventures stay branded in most memory banks well into adulthood.

Noah Moss of Aitkin, Minn. will certainly remember the third week of August 2022 fondly. The 13-year-old was fishing with his great uncle Dave Eichelberger on Lake Plantaganet on Tuesday, Aug. 16 when he hooked into a 51 3/4-inch muskellunge. This is quite a feat on its own, but then Moss followed it up with another 54-inch muskie the very next day. Such a streak of luck is almost unheard of and was the focal point of the family trip to Balsam Beach Resort near Bemidji.

“It’s pretty been much an annual tradition for us to go spend a week together at a cabin somewhere in northern Minnesota. I just felt very fortunate this year that Noah wanted to spend time with me in the boat,” Eichelberger told Outdoor Life. “I had taken [Noah’s dad] out when he was that age and even younger and kind of got him hooked into fishing. So this trip was extra special.”

Eichelberger warned Moss that he’d probably catch his personal best crappie while they were up there, which Moss ended up doing on the first day of the trip. Once that accomplishment was checked off the list, Eichelberger and Moss decided to join Moss’ dad Jordan, who was out chasing muskie.

“We went out the following morning and were fishing along a weed line and Noah said ‘I got one’ and I turned and looked and there was a huge boil on top of the water,” Eichelberger says. “And sure enough, it was a muskie.”

“About halfway through the cast, the fish hit, and it didn’t feel the biggest but then we saw it surface,” he told Outdoor Life. “We got the fish in, it probably took two to three minutes, and we were super excited. My dad was about 50 to 60 yards away in his boat, he just came up with the trolling motor and he measured the fish and it measured 51 3/4 inches.”

Jordan Moss caught his first muskie on this lake many years ago, also with Uncle Dave, so some tears were shed in the process.

“There was a lot of celebrating, a lot of hooping and hollering, a lot of hugging going on, and it was a great thing. Noah got pretty excited, so it was good to see that,” he says. “We talked about that experience for the rest of the day, it was pretty exciting for everybody back at the cabin. We were lucky that his dad was close by when we caught that fish, because he was able to come over and take pictures of us holding the fish together.”

Jordan and Eichelberger told Noah he’d be hard-pressed to beat that fish any time in the near future.

“They were saying ‘Noah, that’s gonna be a pretty tough fish to beat, you know. You might not catch a bigger one than that in a decade or two,'” Moss says.

But the trip wasn’t over yet, so they went back out the next day.

“I had noticed an area where the wind had been blowing into this particular patch of weeds for a couple days. And I figured that might be a good place to fish. Hopefully it was blowing the bait fish into that area and the muskies were in there getting ready to eat,” Eichelberger says. “So we headed in that direction and just shortly into the trip, Noah once again says ‘Uncle Dave, I’ve got one.’ And there’s a big boil on top of the water.”

Just like the day before, the muskie stayed down for a bit and the fishermen didn’t know just what they were dealing with right away.

“I looked at it and I’m like, ‘oh my gosh, this one’s bigger than the last one.’ I couldn’t believe it,” Eichelberger says. “And Noah, he just played it calm. He didn’t get too excited. Some other veteran muskie fishermen, they get pretty excited when they see a fish like that. But Noah was just so calm and cool.”

Uncle Dave is very proud of his nephew’s accomplishments. An avid muskie fisherman himself, he’s never caught one over 50 inches before. But he wasn’t entirely surprised that Moss hooked into these two fish.

“Noah is an experienced fisherman,” he says. “He is actually on the Aitkin Minnesota bass fishing team and has done very well for his age.”

Eichelberger wrote about the experience for the Jamestown Sun.

“I’ve been fishing most of my life, but those two days are a highlight reel I will play over and over in my head,” he wrote. “Unforgettable!!”

Moss called the experience “crazy” and really enjoys muskie fishing. He finds the species especially cool for their tendency to follow moon phases, and beating his dad’s muskie record on this already-special lake was pretty sentimental. But Moss has bigger fish to fry on the horizon.

“I told my fishing partner about it, and he’s pretty excited for me,” Moss says. “But we’re trying to get ready for our state tournament in a couple weeks in South Dakota.”