Kid Catches 50-Inch Muskie While Bass Fishing in a Channel 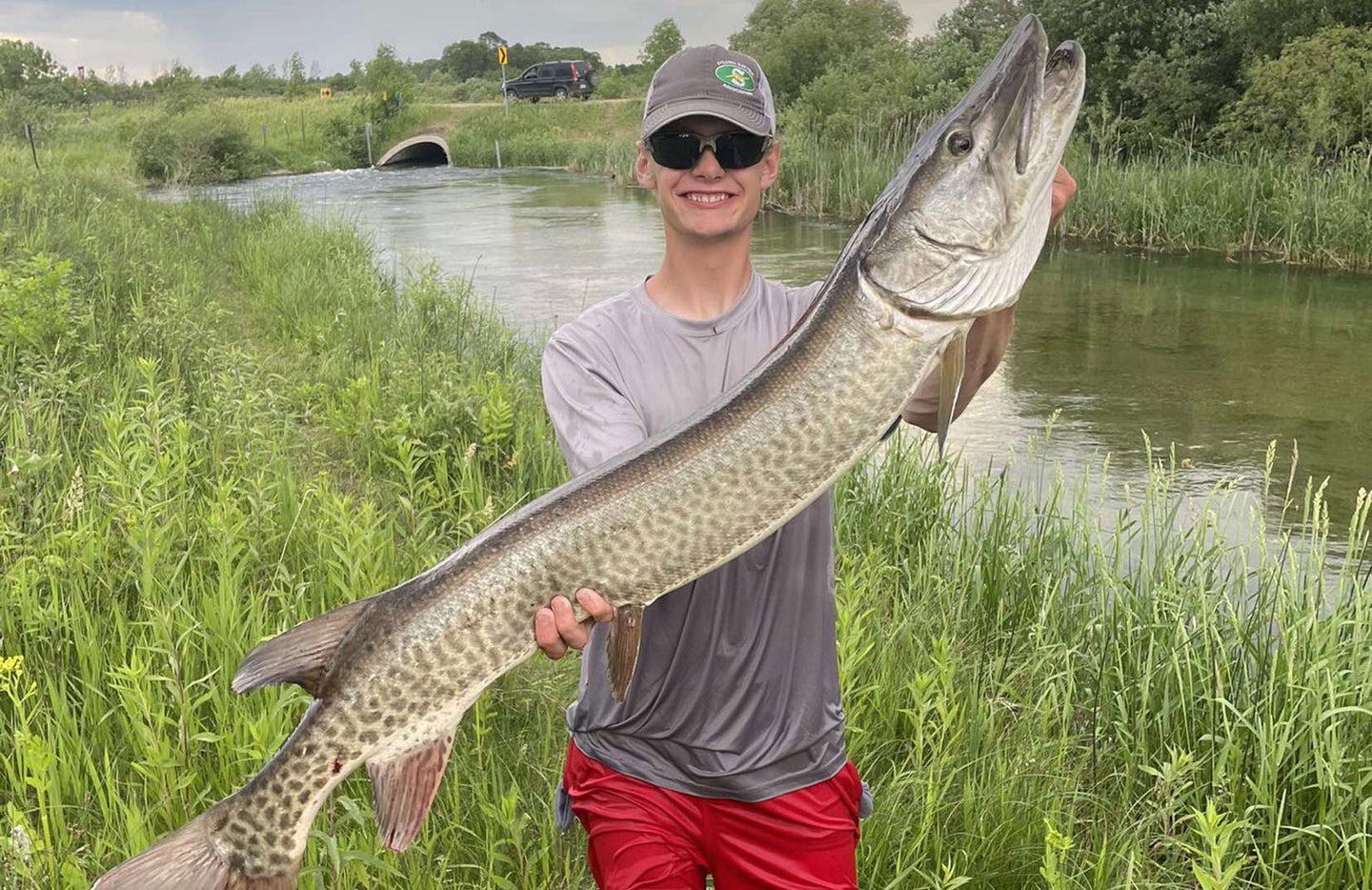 Tayden George, 19, went fishing after work on June 20 and landed a fish he’ll never forget. The dedicated angler was targeting bass and panfish while walking along a 6-foot-deep channel that connects Lakes Ida and Charley in west-central Minnesota. The skinny-water channel is not the kind of place where you’d expect a large muskie to hang out.

“I was going there to catch some largemouth bass, maybe some bluegills,” George told the Park Rapids Enterprise. “I saw a bunch of bass. Then a bunch of sunfish. I thought, ‘OK, maybe I can catch a decent bass to pass my time before dark.’”

He’d fished for about 20 minutes when some youngsters on the opposite side of the channel spotted what they thought was a large pike, and they called for George to come and catch the big fish. George came over and spotted what he thought to be a muskie.

George had a white Keitech swimbait tied to 20-pound test braided line, and he lowered the lure to the fish, jigging it a few times vertically. The muskie sucked the lure in and George set the hook.

George battled the muskie as it fought wildly back and forth in the channel. The fish then turned to run in one direction and George was forced to leap into the channel and chase the fish. He finally brought the brute up close, grabbed the fish, and just then the lure fell out of the muskie’s mouth.

The anglers didn’t have a scale to weigh the fish but one had a tape measure that showed the muskie was 49.5 inches long. They took some photos of trophy muskie, then released the fish back into the channel.

The muskie was very long, but as you can see in the photos, it was a skinny fish.

“I think it was a spawned-out female. It was really skinny,” George says. “Usually a muskie that size would have a big gut, but I think it was all spawned out.”

The channel where George landed his nearly 50-inch muskie isn’t stocked with the species, and neither are lakes Ida nor Charley. However, both lakes connect to Lake Miltona, which is one of the best muskie waters near Alexandria.

Other big muskies have been caught from those connecting waters over the years, including a 50-incher through the ice on Lake Charley in 2021, and 48-inch fish in 2019 on Lake Ida. However, catching them in the channel is rare.