Let’s Get Real About Catching Pike on the Fly

Northerns aren’t muskies, so there’s no need to hit the lake with a fly rod that could hoist a Volkswagen. Here's what you actually need 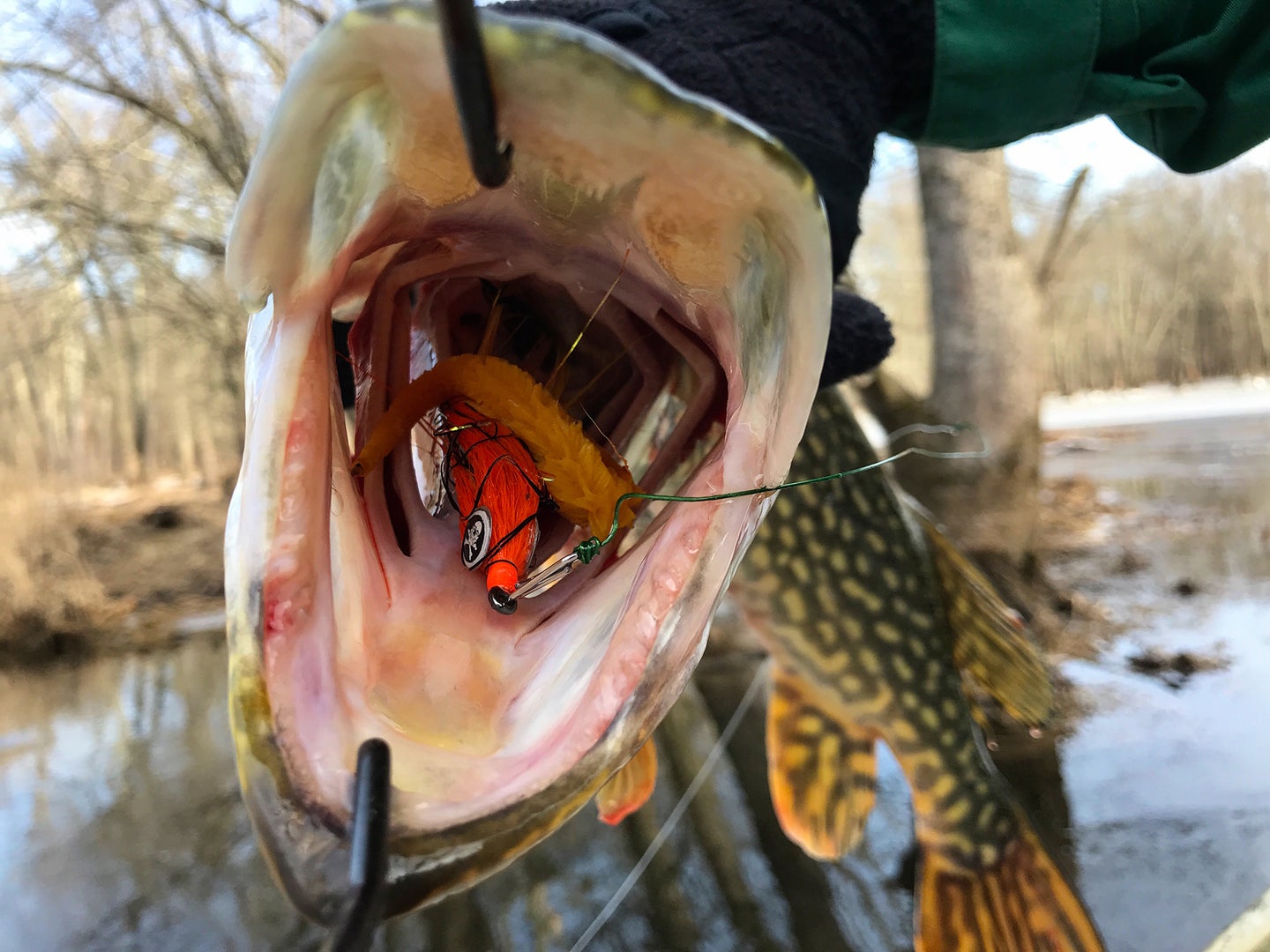 This pike hammered a Dragon Tail streamer, one of the author’s favorites because it’s quick and easy to tie. Joe Cermele
SHARE

Northern pike might be closely related to muskies, but they’re not muskies. They have very different feeding habits. They exhibit different predatory behaviors. Pike are also smaller. Yet despite this, I’ve noticed that many fly anglers want to treat pike like muskies when it comes to gear. This is especially true with novices. Visions of 50-inch pike captivate them, leading them to assume that bigger and heavier tackle is the way to go. Chasing northerns on the fly is one of my favorite things to do, and I’ve done it all over North America. What I’ve learned is that less is often more when it comes to being successful. As fall creeps in and those water temperatures drop, I start getting revved up for pike, but what I won’t be doing is spending hours at the vise or strengthening my arms to get after them. You shouldn’t either. Here’s why.

Muskie anglers tend to use a minimum of a 10-weight fly rod. In some extreme cases, I’ve seen muskie fly freaks bump all the way up to custom 15-weights. This, I can assure you, has little to do with needing that kind of power to fight a muskie. In muskie fly fishing, however, you do need a heavier rod to throw big, heavy flies. It’s also helpful for driving the hooks into their jaw because remember, you might only get one shot a day, so you want whatever advantages you can get. Finally, a strong fly rod allows you to put serious heat on a muskie and get it to the net quickly. If you pay attention, muskie guys—both fly and conventional—don’t let the fish run. They want it in the bag right away. But as soon as you step down to pike, using a 10- to 15-weight fly rod makes very little sense.

If you happen to live somewhere loaded with pike that frequently hit the 40-inch mark or better, different story. The reality, however, is that fisheries like that exist in very few places. For most of us in pike territory, you’re catching large numbers of smaller fish with the occasional trophy mixed in. Therefore, wearing yourself out throwing a 12-weight on the off chance a 45 incher shows up is kind of silly. You’re now overpowering 90 percent of the smaller fish and dampening their fighting ability. Likewise, it’s not uncommon to get dozens of shots at pike per day, so having a rod that will get every fish in the net in 3 seconds isn’t necessary—if you lose one or two, it’s a not a big deal. I use an 8-weight rod for pike regardless of whether I’m fishing locally for fish that average 20 to 25 inches, or in Saskatchewan where a shot at a 50-incher is very real. If that 50 eats my fly, I’m not worried, because I know an 8-weight has plenty of power, and more importantly, I know how to properly fight a large fish with a fly rod so being slightly under-gunned is OK.

You can cast an 8-weight all day without getting worn out, and I’ve used one to land my personal-best fly pike, which measured 46 inches. That pike, by the way, ate a 6-inch fly, not some 12-inch mass of feathers, hair, and flash that took 4 hours to tie. This brings us to fly selection.

A big muskie might snatch a big meal once a day, maybe even once a week. Point being, there is value in creating gym-sock-like flies that match huge forage, move more naturally, ramp vibration, and use whatever accoutrements necessary to trip a fish’s trigger. Muskies often require serious coaxing to open their mouths. Pike, on the other hand, are generally just more willing eaters (which is why I like them more than muskies). That’s not to say there aren’t conditions and scenarios that make pike picky, but for the most part, if they’re hungry, they’re not very discerning. Factor in that higher likelihood that you’ll score a pile of pike in a single day, and you can bank on having a lot of flies destroyed. If you’re throwing $15 custom muskie flies, that hurts.

I tie most of my own pike flies, and I keep them incredibly simple because I anticipate getting one or two fish per fly before it’s relegated to the trash bin. My preference is a 5- to 7-inch streamer with some flash and a tail that has some action. That can be as simple as some long hackle feathers, a pinch of tinsel, and a gob of synthetic dubbing for a head. Another favorite is a Dragon Tail with a flashy dubbing head—which takes less than 5 minutes to tie.

These streamers provide a big enough profile to appeal to trophy pike, but they’re not too big to turn off smaller specimens. They’re also sparse and streamlined enough to deliver effortlessly on an 8-weight rod. If you don’t tie your own flies, invest in some Whistlers, bunny snakes, and simple synthetic baitfish patterns.

Because a muskie angler might only get one shot at a fish in a day (or a week), it’s not uncommon to see them incorporate heavy steel cable or 200-plus-pound fluorocarbon into their leaders as bite protection. It’s an insurance policy, and I get it, but the reality is that muskie teeth aren’t any sharper than pike teeth, and I’ve never had a pike—including 40-plus-inchers—bite through a thin piece of steel wire.

My go-to for years has been Cortland’s Tie-Able Stainless Steel Leader Material, and while it’s available in up to 50-pound breaking strength, I’ve yet to encounter a pike that could cut through the 20-pound. The material is coated in green nylon to reduce glint and visibility, and it’s supple enough to knot without slippage. This makes it easy to add just 10 to 12 inches of wire to the end of my leader without needing crimps or a barrel swivel.

Most importantly, using a thin, flexible wire lets your flies have maximum action. When you’re dealing with a giant, material-packed custom muskie fly, it can move enough water due to its bulk that an extra-heavy bite wire may not affect its action drastically. But if you’re using smaller, simpler streamers for pike, too heavy of a bite tippet can squash the action. If the light wire gets bent or twisted after a few fish, it’s easy to simply clip another piece off the spool and replace it. I also like to tie a small duo-lock snap to the end of my wire so when one of my flies gets too chewed to perform, I can quickly swap it out and keep hammering.