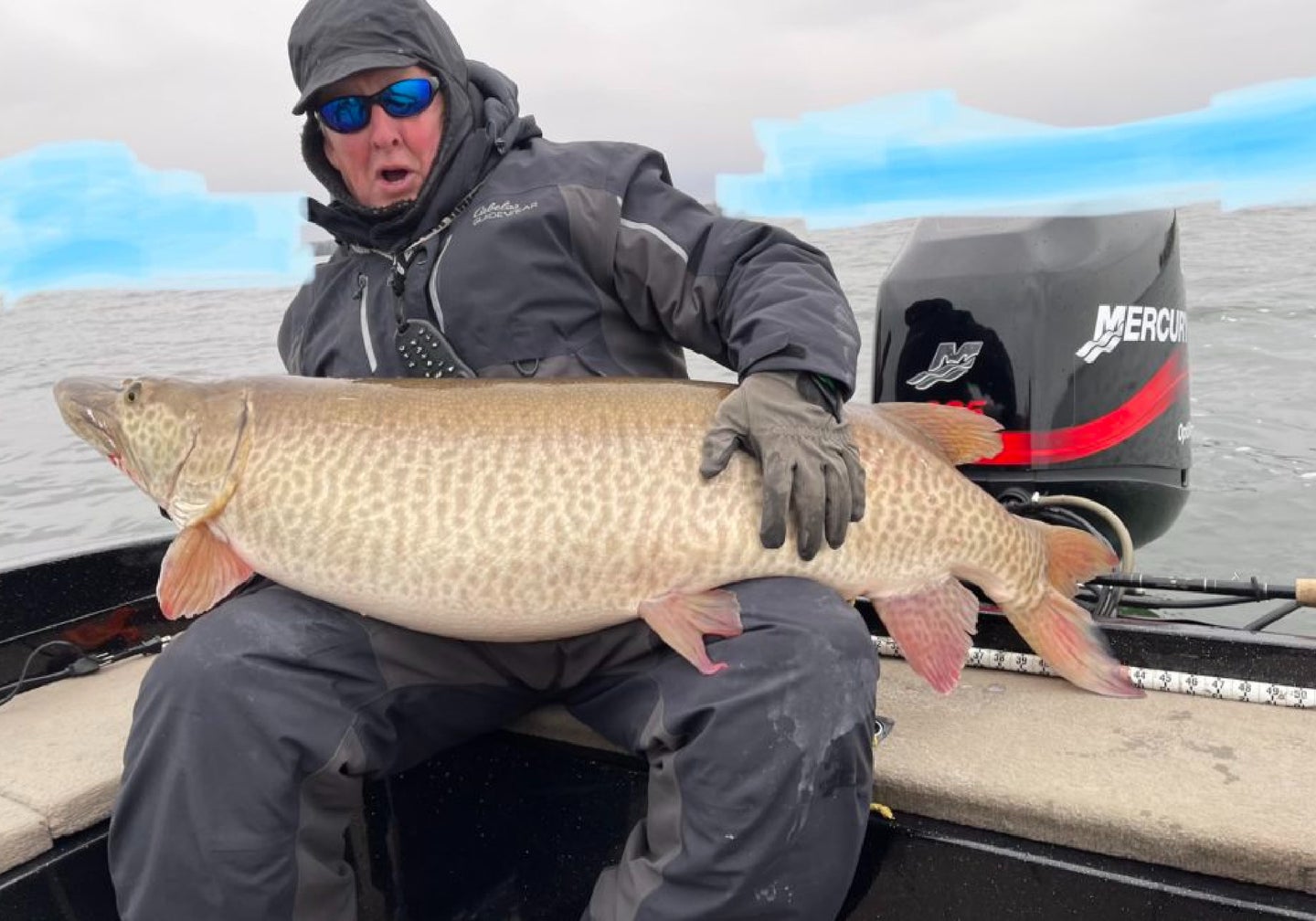 It takes a committed angler to get out on the frigid waters of Green Bay in December. But seasoned Sturgeon Bay locals Ron Hedsand and John Vieau took advantage of the mid-30s temps on Dec. 7 and headed out to chase bass and muskie on one of the best muskellunge fisheries in a state.

It’s a good thing the longtime fishing partners decided to brave the chilly weather. Just a few hours later, Hedsand reeled in what the Door County Pulse is reporting as one of the biggest muskies ever caught in Green Bay.

The fish measured 55 inches in length, about 10 inches longer than the upper end of the range for average muskellunge. Dedicated muskie anglers start drooling once a “Fish of 10,000 Casts” reaches the 50-inch mark, making this one a dream come true. But it wasn’t just the length that shocked Hedsand and Vieau.

The girth on the this fish measured an impressive 29.5 inches, putting the estimated weight of the fish at around 60 pounds. In a 2021 Outdoor Life story, Green Bay muskie guide Doug Wegner said the biggest muskie he knows about coming from Green Bay is a 58.25-inch fish with an estimated weight of 54 pounds (it was caught by his muskie fishing mentor Luke Ronnestrand, a Minnesota guide).

The dimensions on Hedsand’s fish were so big they don’t even come close to fitting on this muskie weight chart from the Missouri Department of Conservation. That’s because muskies in the northern states of Wisconsin and Minnesota grow to epic proportions. For context, one angler recently broke the West Virginia state record with a 51-pound muskie, which was the same length as Hedsand’s. Add nine pounds of weight to the fish you see here and you have an idea of the size fish that Hedsand pulled out of Green Bay’s waters.

Infamous muskie angler Louis Spray still holds the Wisconsin record with his 69-pound, 11-ounce catch from October 1949. His fish also holds the All-Tackle record in the Fresh Water Fishing Hall of Fame, even with two bullet holes in its head, put there by one of Spray’s partners while Spray had the fish right next to the boat. Those two holes prevent Spray from holding the International Game Fishing Association record, which doesn’t consider a gunshot as a legal method of landing record fish. The validity of Spray’s muskie record is still questioned by many to this day.

When Hedsand first hooked into his monster fish, while working a Bulldawg in 15-20 feet of water, he initially thought he was snagged.

“As I was casting, I saw Ron’s rod bend,” Vieau told the Door County Pulse. “Ron said, ‘How can I be snagged?’–which turned into ‘Get the net!’ once he felt the big head shakes.”

The razor sharp teeth lining a muskie’s mouth can make them difficult to boat and photograph without injury. But Vieau snapped a good picture of Hedsand cradling the 60-plus-pound fish, looking like an old pro. They released the muskie shortly thereafter to live and eat another day. Muskie of that length can be 20 years old or older.

“Although we catch many different kinds of fish, Ron is a diehard muskie fisherman,” Vieau said. “Always has a good attitude and confidence.”

Green Bay has become a red hot muskie fishing destination in recent years. Legendary muskie angler and Wisconsin resident Pete Maina wrote for Outdoor Life: “There’s no doubt it’s the best trophy muskie fishery in Wisconsin. That being said, trophy-seeking muskie anglers won’t be alone as there’s plenty of fishing pressure. However, there is also plenty of room to search for Ethel out on the Bay. It seems like these fish travel in packs, more often than muskies in other fisheries. They show up in certain locations consistently with their seasonal moves. And even though these traditional areas are now well known, big fish continue to be caught. Green Bay muskies definitely roam far and wide from popular zones as well, including way to the north, and you can find them on both sides of the bay.